Why Putin’s Reelection Is Guaranteed: News: The Independent Institute

President Vladimir Putin is running for a second consecutive term and a fourth term overall. Putin will win this vote—and all of the following elections.

He is the “president for life” as he cannot just quit like Zimbabwe’s Robert Mugabe or South Africa’s Jacob Zuma. Hostage to his own crimes and misdemeanors, Putin is doomed to die in his Kremlin residence.

Russians are accused of rigging elections all over the world, but in Russia itself this is unnecessary. Putin consistently scores much higher in opinion polls than all his numerous rivals combined. His messages of “patriotic leadership,” “managed democracy,” and “strong Russia” resonate well with the Russian people, who endured the monstrous Soviet dictatorship and Nazi invasion with over 70 million lives lost to socialist mass murderers of both stripes.

Putin’s annexation of Crimea was very popular in Russia, and it’s to his political advantage that the March 18 presidential election falls on its fourth anniversary. If for some unlikely reason he does not win a majority of the votes, then a second round will take place on April 8.

Putin’s electoral strategy, which has a tradition dating back to the times of Ivan the Terrible, is pretty simple: let as many candidates as possible run against him, and the more ridiculous they are, the better it is for his reputation.

The only real threat to Putin’s presidential tenure was “nationalist democrat” leader Alexei Navalny, who gained prominence in Russia as a critic of corruption of the Putin administration. Navalny, however, has an arrest record for embezzlement and illegal protests, and was barred by Russia’s Central Electoral Commission from running in 2018 elections.

Other candidates for the presidency include neofascist mischief-maker Vladimir Zhirinovsky, Pavel Grudinin of the Communist Party of the Russian Federation, Maksim Suraykin of the rival Russian Communists party, popular TV journalist and actress Xenia Sobchak of the Civil Initiative movement, and Grigori Yavlinsky, my former colleague at the Soviet Department of Labor who now leads the social democratic Apple Party. A couple others without name recognition or coherent platforms are also running.

The first Russian presidential debate staged by Russia’s Central Electoral Commission, which was attended by all candidates but Putin, descended into farce when Xenia Sobchak doused Vladimir Zhirinovsky with water.

The scene erupted after Sobchak chastised fascist Zhirinovsky for interrupting another candidate. Zhirinovsky responded with obscenities and said Sobchak’s behavior was more fitting to a reality TV show she once presented.
The pair then exchanged words before Sobchak resorted to what she said were Zhirinovsky’s own methods and emptied a glass of water over him.

Zhirinovsky promised Russians a “brutal dictatorship” and said that he would “punish the oligarchs, and everyone who steals, to return an estimated $1 trillion held offshore.” He demanded that Putin become Czar and restore the Russian Empire’s borders of 1850—i.e. with Alaska, Finland and Poland included.

Even Pavel Grudinin, the Communist Party candidate, saw the debate as an unworthy comedy. “I’m not going to participate in this, because you’re the ones who keep people from coming to the polls because it’s a farce,” he declared before walking off the set.

The only major result of the debates was to convince many viewers that Sobchak is not only visually more appealing, but also mentally superior to other candidates.

Putin, whose cronies orchestrated this circus, wisely distanced himself from the spectacle. His press secretary Dmitry Peskov implied that the president shows voters all they need to know by his deeds, not debates.

Putin, however, is actively campaigning in the provinces. Using nationalist slogans, he said he would reverse the collapse of the Soviet Union if given a chance to alter modern Russian history. A KGB officer in the Soviet era, Putin has called the 1991 demise of the Soviet Union the “greatest geopolitical catastrophe” of the twentieth century. This view continues to strike a chord with millions of nostalgic older Russians. Ultimately, this is the reason why Putin will comfortably win re-election.

END_OF_DOCUMENT_TOKEN_TO_BE_REPLACED 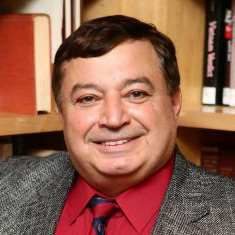 Yuri N. Maltsev is professor of economics at Carthage College.

RELATED
The GOP Needs to Go Back to Sound Principles on Free Enterprise, Small Government, and Legal Immigration
End the COVID National Emergency Now
Left Libertarians, Dobbs, and the Ninth Amendment
Congress Must Fix the Electoral Count Act to Avert a Crisis
Why Do Progressives Support Democrats? Part Two
What Difference Did the Election Make?
Why Do Progressives Support Democrats? Part One
The Development of Liberalism in Ukraine
On Gas Prices, Simple Economics Trumps Biden’s Partisan Agenda
Vote Like a Woman: When You Vote, Remember Who Has Recently Most Hurt Women
Permissible and Impermissible Incendiary Speech?
Michael Bloomberg Has Become the Advocate that Higher Education Needs the Most