The Curious Rise of the Push for $15 Wage: News: The Independent Institute

In 1987, the New York Times published an editorial, titled “The Right Minimum Wage: $0.00”—which advocated the complete abolition of minimum wage laws. In January 2009, the Democratic Party took complete control the federal government, including a filibuster-proof majority in the Senate. At the time, the minimum wage was $6.55 an hour, scheduled to rise to $7.25 an hour in July 2009. The Democrats decided not to boost the wage above the level set by the Bush administration, and thus the federal minimum wage has remained at $7.25 an hour ever since.

Over the next few years, however, something very strange happened. The progressive movement began advocating a $15-an-hour minimum wage, and the proposal has now been included in the Democratic Party platform. In a number of important states and municipalities, $15 minimum wage laws have been passed, albeit phased in over a number of years.

What explains this dramatic change in attitude?

Although it’s been a few years since the most recent increase, the $15 proposals cannot simply be written off as a cost-of-living adjustment, as the consumer price index is up only some 11 percent since the previous increase.

Instead, there seems to have been a sea change in attitudes toward the minimum wage, not just among Democrats in the United States, but throughout the world. In 2004, Germany instituted a highly successful set of labor market reforms, which dramatically brought down the unemployment rate by controlling wage costs. Despite this success, Germany recently began reversing these reforms, instituting a new minimum wage law. The Conservative government in Britain recently enacted a dramatic increase in the minimum wage, and Republicans such as Mitt Romney have also advocated a higher minimum wage.

I have no answer to the question of why the minimum wage has suddenly become so popular, but I have done some research that suggests that we need to be very careful in this area. In my new book on the Great Depression, The Midas Paradox, I found five examples of New Deal policies that pushed up hourly wage rates in the United States.

The first, and most dramatic, occurred in July 1933, when President Franklin D. Roosevelt ordered an across-the-board 20 percent increase in hourly wages, despite high unemployment. In the previous four months, industrial production had soared by 57 percent. Unfortunately, the dramatic wage increase seems to have aborted the recovery, and industrial production would not reach July 1933 levels for another two years, after the Supreme Court ruled his wage-fixing policy unconstitutional in May 1935.

The other four wage shocks were not quite as dramatic, but in each case a promising recovery in industrial production was temporarily derailed. As a result, the United States did not recover from the Great Depression until the end of 1941, whereas recovery would have occurred years earlier if the growth had continued at the rapid rate that occurred during periods when wages were not being artificially inflated, such as the period right before July 1933 and right after May 1935.

There are some puzzling features associated with the push for a $15 an hour minimum wage in states like California. Many of the progressives that favor this initiative also oppose trade pacts with poor countries, worrying that apparel workers in Texas making $7.25 an hour can’t possibly compete with Mexican workers making $3.50 an hour. That’s not necessarily true if the differences reflect productivity. Ironically, it’s a much better argument against an attempt to artificially boost the pay of apparel workers in California to $15 an hour, when workers with presumably comparable productivity in Texas could be paid $7.25 an hour.

It’s also puzzling that labor unions in California have asked to be exempted from the minimum wage law. These groups were among the strongest proponents of this legislation. Why then, would they not want their own workers to benefit from this law? And even if they didn’t think union workers needed the protection, perhaps because they could negotiate wages above $15 an hour without any help from the government, why bother to ask for an exemption? What harm could the law do?

Perhaps union leaders are aware of the impact of artificial attempts to push wages much higher during the 1930s.

RELATED
Justice Alito Got It Right on Abortion and Stare Decisis
How the Boom Bust Works
If You Really Wanted to Destroy the United States, Then . . .
Post-Faucist America: Without crucial reforms, the NIAID boss Anthony Fauci will be neither gone nor forgotten.
The GOP Needs to Go Back to Sound Principles on Free Enterprise, Small Government, and Legal Immigration
Fine. Blame Ticketmaster for the Taylor Swift Fiasco, but Don’t Overlook the Fundamental Cause.
Can’t Get Taylor Swift Tickets? Blame Other Fans, Not Ticketmaster
End the COVID National Emergency Now
Let Them Compete: Labor Markets Are Workers’ Friends, Not Their Enemies
Left Libertarians, Dobbs, and the Ninth Amendment
Congress Must Fix the Electoral Count Act to Avert a Crisis
Why Doesn’t This Economist Want His Daughter to Be a Feminist? 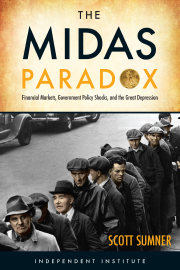