Earth to Paul Krugman and the New York Times: Debt Is Not Good: News: The Independent Institute 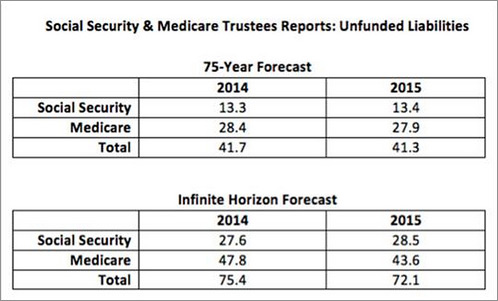 Source: Source information located at the bottom of column.

First the good news. The federal government’s tax receipts are coming in at a rate somewhat higher than what was expected a few months ago. That means a shut-down-the-government debt limit stalemate will be pushed back until November or December. It also means that the federal debt will actually decline a bit this year.

Now for the bad news. We are experiencing the calm before the storm. The Congressional Budget Office reported Tuesday that although our fiscal situation is improving, by 2018 we will snap back to swelling deficits and unsustainable debt. As reported by the Washington Times:

Debt held by the public ... will fluctuate for a few years before beginning a steady climb ... and nearing 77 percent [of GDP] in 2025. Those are levels unseen since 1950, when the country was getting out from under the burden of World War II.

In fact the CBO predicts that by 2040 the federal debt will reach 100 percent of national income—a point regarded as a clear danger zone based on recent economic studies.

The latest CBO report comes only a few days after New York Times columnist Paul Krugman penned a column entitled “Debt is Good.” What? Was that a misprint? No, Krugman’s entire column was an encomium to debt.

To be fair, deep in the middle of an otherwise hard to believe stream of consciousness, Krugman did make a decent point:

[I]ssuing debt is a way to pay for useful things, and we should do more of that when the price is right. The United States suffers from obvious deficiencies in roads, rails, water systems and more; meanwhile, the federal government can borrow at historically low interest rates. So this is a very good time to be borrowing and investing in the future, and a very bad time for what has actually happened: an unprecedented decline in public construction spending adjusted for population growth and inflation.

We are looking forward to mounting debt because in Social Security, Medicare, Disability Insurance and other entitlement programs, we have promised more than we can afford given expected taxes and premiums. According to the latest reports from the Social Security and Medicare trustees, the unfunded liability in both programs is $72 trillion, looking indefinitely into the future. (See the table.) Based on more realistic accounting, the actual obligation is in excess of $100 trillion—about six times the size of our entire economy.

If we had responsible social insurance programs, we would have $100 trillion in the bank, earning interest. But we don’t. And the fact that we don’t means we are in trouble.

How does that affect federal government finances today? In a pay-as-you-go system what matters most is cash flow. Currently, Social Security, Medicare and Disability Insurance are all paying out more in benefits than they are collecting in dedicated taxes and premiums. We are using about one in every seven general revenue dollars to cover these deficits. By 2020, we will need more than one in five. By 2030, we will need about one in three.

One way to think about how much debt we have accumulated is to imagine closing down Social Security and Medicare—the way one might close down a pension fund. That is, imagine that we stopped collecting taxes tomorrow and agreed to pay everyone the benefits they have earned so far. How much would we owe? Answer: $52 trillion—more than three times the size of our economy!

RELATED
‘Science,’ They Said
Does Another Decade of Inflation Loom Ahead?
Health Care Components of the $3.5 Trillion (Or, Is It $5.5 Trillion?) Spending Plan
The Politics of Health
Wokeness: An Evil of Our Age
Recall the California Ideology
A Short History of the Forbes Top Colleges List
Rebutting Paul Krugman on the “Austrian” Pandemic
Why We Are Divided: The Case of Larry Elder
Federal Higher Education Policy and the Law of Demand
Sorry Facebook, Forced Universal Vaccinations Are Not the Answer
Congress Needs to Rein in a Too-Powerful Federal Reserve