Why Boom Is a No-Show: A Lack of Net Investment: News: The Independent Institute 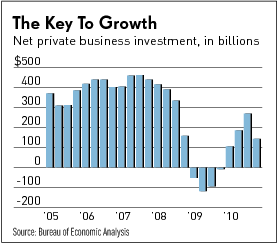 Although the economy is showing some signs of revival, many people wonder why it hasn’t roared back, as it did after most previous contractions.

If consumer spending were the key, the economy would be going strong. Real consumer spending peaked in the fourth quarter of 2007, fell slightly (about 2.5%) over the next six quarters, and by the fourth quarter of 2010 exceeded its previous peak by almost 1%. So it is clear that a “collapse” in consumption is not to blame for the economy’s anemic recovery.

What is to blame is the collapse of private business investment. Until this critical component of the economy—technically, “private domestic business net investment”—fully recovers, the economy will continue to sputter.

Gross investment includes expenditures aimed merely at maintaining or replacing existing structures, tools and equipment, software and other capital goods as they become obsolete or wear out.

But unless firms do more than make up for depreciation, they do not expand their productive capacity, except to the extent that they replace worn-out or obsolete capital goods with models that employ improved technology. If all we do is replace a worn-out machine tool with a new one, we have not increased the number of machine tools.

With that in mind, consider what has happened to net private investment.

Net private investment reached its recent cyclical peak in the third quarter of 2007, when firms were investing at a net annual rate of $463 billion per year. (In that same quarter, gross business investment was running at a $1.66 trillion annual rate.)

Although the financial-market panic that flared up in September 2008 began to subside early in 2009, net investment continued to fall, going into negative territory (minus $53 billion annually) in the first quarter of 2009 and falling further to minus $119 billion in the second quarter of 2009.

Some improvement began in the next quarter, but for the entire year 2009, net business investment amounted to minus $69 billion. Hardly by coincidence, U.S. gross domestic product also fell substantially in 2009.

Last year, net private investment increased significantly during the first nine months of the year, reaching an annual rate of $270 billion in the July-September quarter. It then contracted sharply—by almost 47%—to $144 billion in the fourth quarter. For the entire year, the amount of private business net investment was only $177 billion.

Whether the collapse in the final quarter was a fluke or the beginning of a longer-term decline, we shall have to wait to see.

The critical point is that private net investment is currently occurring at a rate too low to sustain rapid economic growth. In the most recent quarter, October-December 2010, it was still less than a third of its 2007 peak rate. For the entire year 2010, it was down 60% from its peak.

Unless private investment recovers more rapidly, the economy’s recovery is sure to remain slow, too slow to significantly lower unemployment.

Firms are reluctant to undertake risky long-term investments because they continue to view the future with major misgivings, owing to the unsettled condition of future government actions with regard to health care, financial regulations, energy regulations, taxation and other matters that have serious business implications.

Although ObamaCare and the Dodd-Frank financial “reforms” were approved by Congress and signed into law last year, these massive statutes leave scores of important details awaiting determination by administrative agencies and courts. This doesn’t create a climate conducive to aggressive investment.

RELATED
The FDA Could Easily Solve the Baby Formula Shortage by Allowing More Imports from Europe
Congress Has a Stake in the Dollar’s Integrity
Which Economists Should Have Gotten Nobels Before They Died?
California Rejects Four-Day Workweek, but Supporters Haven’t Given Up
Whatever Happened to the $15 Minimum Wage?
University of California Suicide Watch
Biden Going Green by Killing Jobs, Strangling Growth with Red Tape
Will Populism Triumph in France’s Election?
You Thought Tax Day Was Bad? Biden Has Worse in Store
Delta Doesn’t Owe Me More Legroom
Trickle-Down Racist Antiracism
We Can Adapt to Climate Change Without Destroying Our Way of Life