Snuff This Lawsuit Out: News: The Independent Institute

←  NEWS
COMMENTARY
Snuff This Lawsuit Out
June 23, 2000
By Michael I. Krauss
Also published in The Washington Times  « Show Fewer

Tobacco litigation is in the news again. In a heated four-hour debate before U.S. District Court Judge Gladys Kessler in early June the tobacco industry argued that the federal government’s $200 billion-plus lawsuit must be dismissed as contrary to legal principles. Attorney General Janet Reno, claiming she has “serious allegations” against Big Tobacco, hopes Judge Kessler will let a jury decide whether the industry should reimburse smoking-related Medicare and Medicaid costs.

Few people think highly of tobacco—and this writer, who has never smoked, finds the weed frankly revolting. But lawsuits must be decided under rules of law, not as popularity contests. The fact of the matter is that the industry’s legal reasoning is compelling.

In 1997 Miss Reno testified before the Senate that the federal government had no legal basis to recover health care expenditures from tobacco companies. That’s why she left this task to the states, which recovered a whopping $246 billion from the industry in 1998. Yet in 1999, under pressure from a White House that had failed to enact its desired 55-cent-per-pack federal cigarette tax increase, Miss Reno shamelessly filed the very same suit she had explicitly admitted was groundless.

Why should Judge Kessler dismiss the federal suit? Consider the reasons:

Overwhelming evidence reveals that tobacco manufacturers never duped the federal government. Washington has known for decades that smoking is dangerous. Since 1964 every pack of cigarettes sold in the United States has carried a federally mandated warning of the health risks of smoking. So Washington has no direct fraud suit against Big Tobacco.

Nor can Washington claim that it has somehow acquired individual smokers’ rights to sue. For the federal government denies that such rights even exist. In 1997 the Department of Veterans Affairs rejected, on the grounds that veterans assumed the risks of smoking, a claim by former soldiers allegedly sickened by cigarettes which the department had furnished at no cost. Washington, it turns out, freely distributed cigarettes to servicemen until 1974, a full decade after it required health warnings.

Virtually every serious expert who has studied the costs of smoking has concluded that, while it is dangerous to smokers, it causes no loss to the federal government. The reason is smoking affects the timing of government health care costs. Smokers die on average earlier than nonsmokers, so costs paid by government to treat tobacco-related diseases are more than offset by savings on other diseases and in retirement benefits. The billions in federal excise taxes each year ultimately generate a net gain to federal coffers. The fact is that Washington would suffer fiscally if Americans stopped smoking.

Particularly damning for Miss Reno is the fact that, in 1947, the United States Supreme Court, in U.S. vs. Standard Oil, ruled that the federal government may not sue third parties to recoup health care costs unless it has express statutory authorization to do so. In response, Congress passed the Medical Care Recovery Act (MCRA), which Miss Reno invokes in the federal lawsuit. The MCRA allows Washington to recover the cost of medical treatment provided to individual military and federal employees injured by a third party’s negligence. But MCRA’s language and judicial interpretations show that the statute does not allow recovery of general Medicare outlays. Indeed, since MCRA’s enactment the federal government has never once brought a claim for amounts paid under Medicare.

Finally, Congress in 1980 and 1984 amended MCRA to add Medicare Secondary Payer provisions, giving the federal government authority to recover specific Medicare costs which other insurance companies had promised to pay. The Secondary Payer provisions have never been interpreted to allow Washington to take action against alleged wrongdoers; only suits against insurers were allowed.

At any rate, to recover under Secondary Payer provisions Washington must show that sales of tobacco are in and of themselves wrongful. Since the feds have consistently regulated, subsidized, promoted and fiscally profited from tobacco products while fully aware of the plant’s health risks, such a showing would seem difficult unless Washington admits being complicit to the wrongdoing. And a basic common law rule is that one accomplice to a wrong can’t sue the other.

The federal tobacco suit is, pun intended, smoke and mirrors. It is a thinly veiled quest for billions in federal revenue that President Clinton has not been able to obtain through the constitutional taxing process. Whether you like smoking or not, if you cherish the rule of law you must hope Judge Kessler dismisses this awful suit.

Michael I. Krauss is a law professor at George Mason University.
Law and LibertyLitigation

RELATED
South Carolina Lawmakers Bear Responsibility for Supreme Court’s Abortion Ruling
‘Belief in Freedom’ Is Bad for You
Analogical Reasoning and the Second Amendment
Should Courts Appoint Historians as Experts in Second Amendment Cases?
Did the Fourteenth Amendment Alter the Meaning of the Second Amendment?
When the Second Amendment’s Plain Text Covers Conduct, It Is Presumptively Protected
America’s Rifle, the AR-15 Is Protected by the Second Amendment
Twitter Files Confirm Censorship of the Great Barrington Declaration
The Tentacles of the Social Media Octopus
Why Biden’s Pot Pardons Are a Step in the Right Direction
Pandemics and Liberty: An Introduction
Special Master Ruling Smacks of Excessive Reverence for the Imperial Presidency 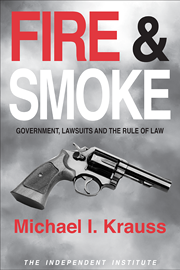