What Do the New Deal and World War II Tell Us About the Prospects for a Stimulus Package?: News: The Independent Institute

←  NEWS
COMMENTARY
What Do the New Deal and World War II Tell Us About the Prospects for a Stimulus Package?
November 21, 2008
By Price V. Fishback
Also published in The New York Times  « Show Fewer

Everybody is talking about the stimulus package, and many are citing the New Deal and World War II as classic examples of successful stimulus programs. In punditry history, the federal government spent large amounts of money on works projects in the 1930’s and munitions in the 1940’s, and these were important stimuli to the American economy. Readers should beware, because the history is more complicated than the two-line descriptions.

Federal spending rose from 4 percent to 8 percent of G.D.P. during the New Deal in the largest peacetime expansion in federal outlays in U.S. history. Yet this was not an example of Keynesian stimulus to the economy. Economists and economic historians have known this for the past 70 years, yet the myth lives on. The accompanying chart, which measures everything in real 1958 dollars for the 1930’s, shows why. The definitive analysis is more complicated, but the figure is a good shorthand way to show this. 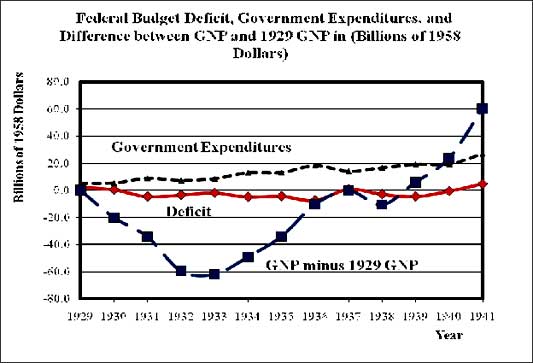 The chart shows federal-government outlays, the budget deficit, and the difference between G.N.P. in that year and G.N.P. in 1929. The problem to be resolved was to reduce the huge gap in annual real G.N.P., which had fallen 33 percent below the 1929 level.

The graph shows that federal spending comes nowhere close to replacing that gap. Once we take into account the taxation during the 1930’s, we can see that the budget deficits of the 1930’s and one balanced budget were tiny relative to the size of the problem.

John Maynard Keynes published an open letter to Franklin Roosevelt in major American newspapers saying more spending was not enough; the government needed to run larger deficits. As Keynes’s arguments were fleshed out after the 1930’s, various scholars ranging from Abba Lerner to E. Cary Brown to Claude Pepper have re-examined the New Deal budgets. They all agree that the New Deal cannot be described as a Keynesian stimulus program. We can only hope that the word will finally spread widely enough now to correct the myth.

If not Keynesian policy, what was the New Deal? It was a broad-ranging mix of spending, regulation, lending, taxation, and monetary policies that can best be described as “See a problem and try to fix it.” In many situations the fix for one problem exacerbated other problems. The programs to raise farm prices hurt work relief recipients, while attempts to raise wages and prices contributed to more unemployment, and thus a greater need for relief spending. My focus here is on spending, but the reader can find more information on the New Deal in the material discussed at the end of this piece.

The main New Deal spending programs that might be described as stimulus programs are the relief and public works during the New Deal. The relief programs started with the Federal Emergency Relief Administration (F.E.R.A.), which started in mid-1933 and was phased out after June 1935. The federal government distributed grants to the states for two types of relief: work relief and direct relief in the form of cash, food, and clothing. In the face of 25 percent unemployment rates, this was truly relief for the unemployed and people in dire trouble. Relief administrators evaluated the incomes and basic needs of relief applicants and tried to give them enough direct relief or enough payments for work relief jobs to allow the family to survive at a very basic level of living.

The best-remembered federal relief program is the Works Progress Administration (W.P.A.), which replaced the F.E.R.A. in July 1935 as the primary emergency work relief program. The W.P.A. was created as part of a series of compromises between F.D.R. and the two houses of Congress in 1935. The executive branch was given more control over emergency work relief in the W.P.A., which would eventually be eliminated in 1942. Responsibility for direct relief for “unemployables” was returned to state and local governments. Finally, the Social Security Act established the old-age pensions known now as social security, and created a series of state/federal programs for unemployment insurance, aid to dependent children, old-age assistance, and aid to the blind. The latter group of programs replaced state programs in place in many of the states.

As people invoke the W.P.A. and F.E.R.A. work relief projects as templates for modern stimulus programs, they do not really understand how they worked.

While it’s true that the F.E.R.A. and W.P.A. built many roads, buildings, and public works, they were designed as “relief” programs with work requirements. The goal was to help families reach a minimum level of income, and the average payment per hour on these programs was roughly 40 percent of the wage being paid on the non-relief public works projects described below.

The pay was so low because the unemployment rates between 1933 and 1939 ranged between 14 percent and 25 percent, Roosevelt was trying to keep budget deficits in check, and the administration was trying to help as many people as possible reach a basic standard of living.

This focus on providing a basic standard of living contributed to an improved situation on several socio-economic dimensions. Recent studies of the relief programs in the largest cities suggest that spending an additional $2.5 million in year-2008 dollars (about $200,000 in 1935) on relief was associated with a reduction of 1 infant death, 1 suicide, 2.5 deaths from infectious and parasitic diseases, 1 death from diarrhea, and 21 property crimes.

Despite this success, my sense is that most people are not interested in recreating a system where people are paid such low wages to contribute to building public works for the rest of the society. The modern social-insurance structures of unemployment insurance and a wide variety of health, nutrition, and welfare programs are already in place to help resolve these types of problems.

These programs built dams, sewers, bridges, roads, and buildings, as did the W.P.A. and F.E.R.A. The difference was that the programs contracted with private contractors, who then hired workers at the typical wages paid in the construction industry.

How successful were they at stimulating the economy? As yet, the only estimates we have are for the combined effects of the public works and relief programs. Studies that examine their success at the county level suggest that an additional grant dollar per person distributed to a county for public works and relief during the period of 1933 to 1939 contributed to a rise in in-migration and an increase in income per person in the county of about 80 cents in 1939. We should remember, however, that this was during a period when there were huge numbers of unemployed workers available for work. Even during this period, some studies find evidence of crowding out of private employment. Today, with unemployment rates below 7 percent, it is likely that such public-works spending would crowd out a significant amount of private construction.

My own recommendation would be to evaluate the modern public-works programs more on the basis of the specific productivity of the programs rather than as stimuli to the economy. We know that we have an aging infrastructure of roads, bridges, and dams. The costs and benefits of the replacements would be my focus in evaluating whether to spend the money or not.

It is widely held that World War II was a huge Keynesian stimulus that finally brought us out of the Great Depression. On the surface, the facts seem to fit. The federal government devoted 44 percent of G.D.P. to fighting the war and ran very large deficits. Unemployment rates fell below 2 percent even as large numbers of women entered the work force.

In a series of academic papers, Robert Higgs of the Independent Institute has raised doubts about this rosy picture of Keynesian stimulus. The war economy was a very unusual setting. While running large deficits, the federal government took command over large segments of the economy, allocated a large part of the resources to the war effort, put 15 percent of the working-age population in the military, and established wage and price controls.

The official statistics on private consumption during World War II suggest that real consumption expenditures rose, but they use official-controlled prices that misrepresent the true price of consumer goods in the period.

After relatively minor adjustments to reflect the real prices, real consumption in the middle of the war was lower than it was in 1941. Most in the military were risking life and limb in foreign lands. On the home front, people could not buy new autos, tires, and many appliances at any price. Rationing programs sharply limited access to meat, sugar, gasoline, and a wide array of other products.

Life during World War II was largely a continuation of the deprivation of the Great Depression, with two exceptions: Fighting the war put many in the frame of mind that they were sacrificing for a much larger goal of winning the war, and people accumulated savings because there was not much they could buy at the time.

One sign that Keynesian budget deficits were not the key to bringing the U.S. out of the Great Depression is what happened after the war. Every Keynesian predicted that the private economy would go into a recession because the large government budget deficits would be eliminated and so many men would be returning from the war jobless. Instead, as government deficits receded, private consumption and investment boomed. Resources were no longer allocated to producing munitions and instead were devoted to production of typical consumer goods and services.

Some people might misconstrue this discussion as saying that the U.S. should not have fought the war. The point here is that World War II was a period of sacrifice when many Americans experienced deprivation on par with what they experienced in the latter stages of the Great Depression. Vast budget deficits were not a stimulus in the normal sense of the word because the U.S. was a command economy devoted to an all-out war effort. William Tecumseh Sherman famously stated, “War is hell.” We should add the phrase, “even when financed by large budget deficits.” 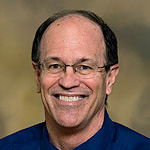 Price V. Fishback is the Thomas R. Brown Professor of Economics at the University of Arizona, Research Associate with the National Bureau of Economic Research, and Co-Editor of the Journal of Economic History.
Economic History and DevelopmentEconomic PolicyEconomy

What Will the Stimulus Stimulate?

A Wish for 2021: Roll Back Border Socialism