Federal Reserve Chairman Jerome Powell still believes that inflation and the money supply are unconnected. He first made this remarkable assertion in his Semiannual Monetary Policy Report to Congress last February, saying that “the growth of M2 . . . doesn’t really have important implications for the economic outlook.” Since then, the U.S. annual inflation rate has climbed to 7.5% from 1.7%, but Mr. Powell hasn’t changed his mind. He doubled down during congressional testimony in December, arguing that the connection between money and inflation ended about 40 years ago. The nearby chart shows otherwise.

By turning a blind eye to money, the Fed has allowed the printing presses to run in overdrive. The money supply as measured by M2, which is the Fed’s broadest measure of money in the economy, has been growing at record rates—with 39.9% cumulative growth since February 2020. M2 is still growing at an elevated, inflationary rate of 12.6% a year. Before the pandemic, you’d have to go back to the early 1980s to find a monetary growth rate this high. 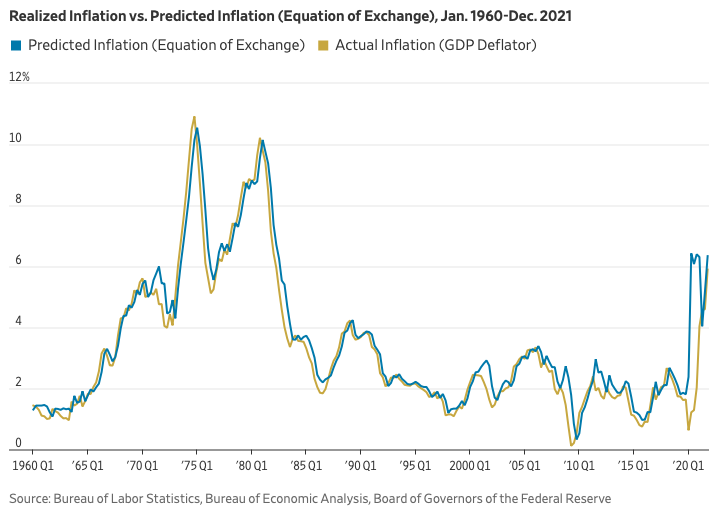 One of us, Mr. Hanke, predicted in these pages last July that year-end inflation for 2021 would “be at least 6% and possibly as high as 9%.” That was based on the quantity theory of money, which economic thinkers have used since the Renaissance. The theory rests on a simple identity, the equation of exchange, which demonstrates the link between the money supply and inflation: MV=Py, where M is the money supply, V is the velocity of money (the speed at which it circulates relative to total spending), P is the price level, and y is real gross domestic product. So, the quantity theory of money provides the link between money and inflation.

If Mr. Powell is right and all that is outdated thinking, then when looking back through economic data, the equation of exchange shouldn’t be able to predict prices. But look at the chart. When we took the past 60 years of economic data and the rate-of-change form of the identity we explained above, it predicted price changes almost perfectly. Our estimate deviated from actual inflation only during 2020, as the money supply grew at unprecedented rates and lockdowns stanched real growth. By June 2021, our estimate for inflation based on the quantity theory of money had reverted back to its conjunction with actual inflation.

It’s time for Mr. Powell and his colleagues at the Fed to realize that money matters.

Email
Nicholas Hanlon is Chief of Staff in the Institute for Applied Economics, Global Health, and the Study of Business Enterprise at Johns Hopkins University.
American HistoryBanking and FinanceContemporary Legislative ActivityEconomic PolicyEconomyFederal Reserve and Central BankingFiscal Policy/DebtGovernment and PoliticsLaw and LibertyTaxes

RELATED
Hulu’s 1619 Project Docuseries Peddles False History
Paul Volcker’s Recipe for Prosperity
Ownership, Control, and Reform: Market-Based Approaches to Universities
Concentrate Where the Murders Are Concentrated
Four Ways to Get What You Want
The Cost of San Francisco’s Reparations Proposal: Nearly $600,000 Per Household
What the Populists in Congress Get Right and Get Wrong
A Dispatch from the Corporatized Dystopia: Bring on the Chains!