Where Have All the Economists Gone? (Racism): News: The Independent Institute

This is my second in a series on why we need to hear more from economists and less from non-economists—especially on economic topics.

Another area where economists have abandoned public discourse is in discussions about economics and race. Economists know an enormous amount about income and race. They have been studying the subject for years. But when was the last time you saw an economist expressing a public opinion about what all economists know on this subject?

All I have seen lately is what flies under the banner of “critical race theory,” which generally holds that income differences between blacks and whites are due to systemic racism that has evolved over time, dating back to the days of slavery.

As it turns out, critical race theory is a misnomer. It doesn’t generate hypotheses that scholars can test against reality. 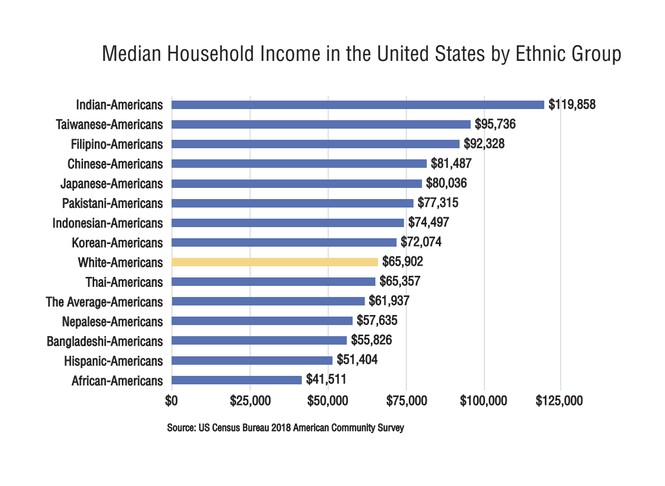 Not only are whites not dominating the income race, but they are also in the middle of the pack.

Can critical race theory explain the pattern depicted in the chart? Not by a long shot.

But economists can explain it; and the explanation has very little to do with discrimination—at least not marketplace discrimination.

Writing in the Wall Street Journal the other day, Heather Mac Donald compared black students with Asian students. For example, a Brookings Institution study finds that Black high-school students spend a little more than a quarter of the time on homework that Asian students do. The average Black math score on the SAT in 2020 was 454 on an 800-point scale. The score was 632 for Asians. Only 21% of Black SAT takers met the math benchmark score of 530. That is the score that the College Board predicts, with 75% certainty, will allow a college freshman to receive at least a C-plus in first-year math. By comparison, 80% of Asian SAT takers met the math benchmark.

Economic studies have found that how students do in school and how they score on tests has a big impact on earnings later in life.

June O’Neill, an economist who used to direct the Congressional Budget Office, and her husband Dave O’Neill produced a comprehensive survey of the economic research on this issue almost a decade ago. They concluded that while discrimination may exist, it’s not the main determinant of overall wages and incomes.

Take the difference in pay for black and white men. The O’Neills found that the difference narrows to just 4% after adjusting for years of schooling and it reduces to zero when you factor in test scores on the Armed Forces Qualification Test (AFQT), which is basically an intelligence test. In other words, after adjusting for just two factors that cause people to be different, the pay gap between black and white men disappears entirely.

Among women, the gap actually reverses after adjusting for education and AFQT scores. Black women get paid more than white women.

The pioneering work in this field was done in the 1950s by Nobel laureate Gary Becker when there was more real racial discrimination than there is today. Becker began with a simple observation: If Blacks are paid less than whites for the same work product, companies could increase their profit by hiring only Black workers. Conversely, a company that hired only white workers would be paying an economic penalty. This same principle applies to wage gaps between men and women, Hispanics and non-Hispanics, etc.

In a free market, employers can discriminate. But they pay an economic penalty for doing so.

Another implication of Becker’s approach is to realize that in non-market settings, in contrast, there may be no cost to discrimination. If rent control causes demand for housing to exceed supply, renters can be choosy. They can discriminate at no cost to themselves. If a minimum wage law causes the supply of labor to exceed demand, employers can be choosy. They get a free pass to indulge their racial preferences.

If politicians are in the back pocket of the teachers’ unions and refuse to fire bad teachers or close bad schools, they may not pay any price at all for closing off educational opportunities for Black children.

If residential zoning prices Black families out of the market for housing in the neighborhoods of good schools, the zoning board may not pay an economic penalty for their decisions.

If the welfare state’s penalties for marriage affect Black families more than white ones, politicians don’t seem to suffer for that either.

Systemic racism, in other words, can be rampant in the political sector (and even worse than normal in blue states and blue cities), and yet be largely absent in the private sector.

Economists have also spent years studying slavery. And no: slavery is not why the U.S. economy grew. If anything, slavery appears to have held us back. And yes: that means that the New York Times 1619 Project really is fake news.

So back to our original question. Why is it that politicians, news commentators, editorial writers, and pundits of all stripes continue to say things economists know are not true, while the economics profession sits idly by and says nothing?

Is it intimidation? Cowardice? Or, is it indifference?