Wind Power Is a Disaster in Texas, No Matter What Paul Krugman Says: News: The Independent Institute

In the wake of February’s tragic power outages in Texas, during which 4.5 million households suffered service interruptions, partisans on both sides have been quick to interpret the events as confirmation of their preferred energy policies. With news images of helicopters deicing frozen turbines, conservatives lambasted Texas’s increasing reliance on wind power as the villain in the story.

Trying to temper this knee-jerk reaction, Reason.com columnist Ron Bailey argued that “[m]ost of the shortfall in electric power generation during the current cold snap is the result of natural gas and coal powered plants going offline.” And Paul Krugman for his part declared that it was a “malicious falsehood” to blame wind and solar power for what happened in Texas, as it was primarily a failure of natural gas.

In this article I’ll lay out the basic facts of which power sources stepped up to the plate during the crisis. Contrary to what you would have known from reading Ron Bailey (let alone Paul Krugman), when the Texas freeze hit, electricity from natural gas skyrocketed while wind output fell off a cliff. The people arguing that wind wasn’t to blame mean it in the same way Jimmy Olson wasn’t to blame when General Zod took over: wind is so useless nobody serious ever thought it might help in a crisis.

In his February 18 column titled “Texas, Land of Wind and Lies,” Krugman declared that

Republican politicians and right-wing media ... have coalesced around a malicious falsehood instead: the claim that wind and solar power caused the collapse of the Texas power grid, and that radical environmentalists are somehow responsible for the fact that millions of people are freezing in the dark ...

In contrast to this dirty rotten lie from the right-wingers, Krugman instead explains:

A power grid poorly prepared to deal with extreme cold suffered multiple points of failure. The biggest problems appear to have come in the delivery of natural gas, which normally supplies most of the state’s winter electricity, as wellheads and pipelines froze.

A bit later in the article Krugman admits that wind was involved as well, but minimizes its role in this way:

It’s true that the state generates a lot of electricity from wind, although it’s a small fraction of the total. But that’s not because Texas—Texas!—is run by environmental crazies. It’s because these days wind turbines are a cost-effective energy source wherever there’s a lot of wind, and one thing Texas has is a lot of wind.

It’s also true that extreme cold forced some of the state’s insufficiently winterized wind turbines to shut down, but this was happening to Texas energy sources across the board, with the worst problems involving natural gas.

Incidentally, there are literally no numbers in Krugman’s article (except for numerals referring to dates), which is a signal that he’s pulling a fast one on his readers. From his qualitative (not quantitative) description, most people would have assumed that when the unusually cold weather hit Texas last month, electricity generation from various sources was down across the board, but that it mostly fell from natural gas, while the drop in wind was insignificant. As I’ll show in the next section, this is utterly false.

Had I not seen the analysis from my former colleagues at the Institute for Energy Research (see their articles here and here), I might have believed the spin that the Texas crisis was really a failure of fossil fuels rather than renewables. Yet as we’ll see, the actual numbers tell a much different story from what most Americans probably “learned” from the media discussion.

The simplest way for me to communicate the relevant information is through three infographics, generated from the Energy Information Administration’s handy tool that shows the source mix for daily energy generation by state.

Before showing the numbers, I need to make an important clarification: the demand for electricity soared to unprecedented levels during the freeze. In particular, on February 14, peak demand on the electric grid surpassed sixty-nine gigawatts, breaking the previous winter record of (almost) sixty-six gigawatts set in 2018. It was in the early hours of the following morning (February 15) that the Electric Reliability Council of Texas (ERCOT) implemented rolling blackouts to prevent the entire grid from collapsing. So to be clear, the issue wasn’t that supply in an absolute sense fell, but rather that demand soared. (Texas typically uses more electricity in the summer to keep things cool, rather than in the winter to keep things warm.)

With that context in place, here are the stats for electricity output from various sources on February 15, 2021: 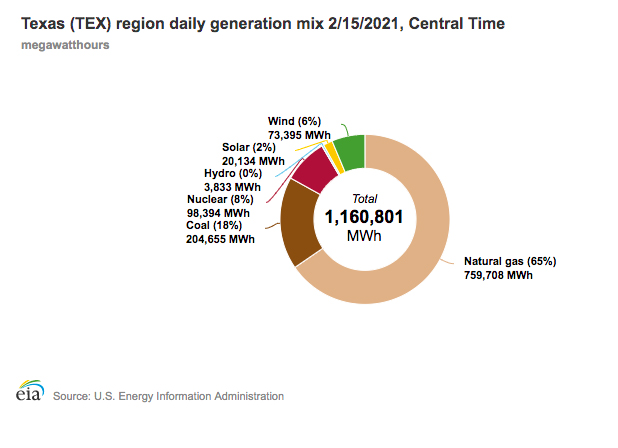 Already we see something interesting. Of the total amount of electricity delivered on this first day of blackouts, 65 percent came from natural gas, while only 6 percent came from wind and 2 percent from solar.

But in fairness, maybe what guys like Krugman meant is that this is much lower than what we normally could expect from natural gas. (Remember Krugman had said that natural gas “normally supplies most of the state’s winter electricity.”)

To test this possibility, we can look at the situation one year prior, on February 15, 2020: 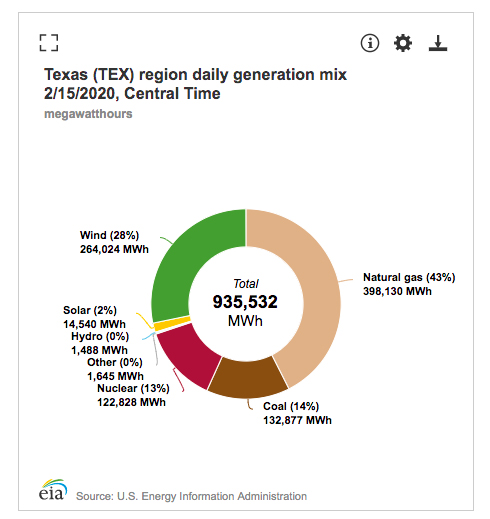 Now, this is interesting. A year earlier, during a normal mid-February day, natural gas “only” supplied 43 percent of the total electricity, whereas wind accounted for 28 percent and solar was the same at 2 percent. Remember how Krugman said wind was only a “small fraction” of Texas generation? Overall for the year 2020, wind produced 22 percent of Texas’s electricity, a higher share than coal.

To sum up, compared with the same date a year earlier, during the first day of the blackouts in Texas, electricity from natural gas was 91 percent higher, while electricity from wind was 72 percent lower.

To reiterate the clarification I gave earlier, part of the confusion here is that electricity demand in February isn’t normally as high as it was because of the freeze. So to test whether natural gas is the culprit, we can compare the generation from various sources during the freeze to the situation back during the summer. For example, let’s look at how things stood on August 15, 2020: 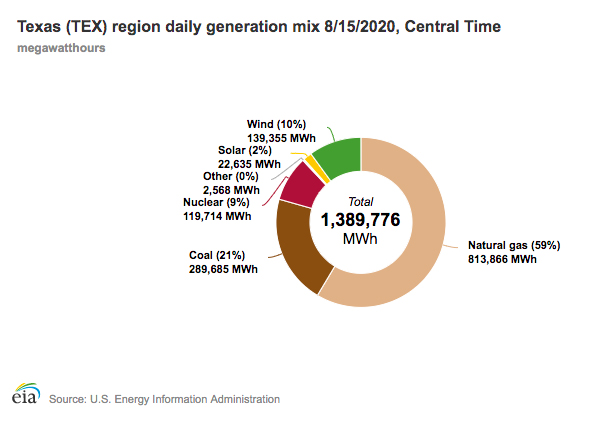 As our date occurred in the dog days of summer, total electric demand was higher in mid-August 2020 than on February 15, 2021. Furthermore, output from every source was lower during the freeze when compared with their performance the prior August 15. However, it seems odd to single out natural gas as the culprit, when it experienced the lowest percentage drop, and (on all dates) was the single biggest source.

The following table summarizes electrical output from various sources on the three dates we have analyzed, and shows the change going from the earlier dates to the first day of the recent blackouts:

Among all sources, the percentage difference between either the previous year or the previous summer was highest for natural gas. That is, the surge in natural gas output year over year was the biggest by far (with coal coming in second with a 54 percent surge), and compared with the summer load its drop was the smallest at 7 percent.

In light of these statistics, it’s a bit odd for commentators to blame the Texas blackouts on natural gas while excusing wind.

What They Mean: Wind Is the Ted Cruz of Electricity

Now, in fairness, what the commentators blaming natural gas have in mind is that ERCOT’s emergency planning assumed that natural gas (and the other “thermal” electricity sources, namely coal and nuclear) could be called upon to fill the gap should there be record demand during a winter storm. If we measure in terms of the total capacity that was temporarily knocked out because of the freeze, then the culprits were thermal sources, rather than wind and solar.

As Jesse Jenkins, an assistant professor at Princeton tweeted out, “Main story continues to be the failure of ... natural gas, coal, and nuclear plants ... which ERCOT counts on to be there when needed.” He further specified, “Of about 70,000 MW of thermal plants in ERCOT, ~25–30,000 MW have been out since Sunday night. Huge problem.”

And so we see what people mean when they say the Texas blackouts are the fault of natural gas, rather than wind: since no serious official ever expected wind to be any help during a crisis, it can hardly be blamed for not showing up when disaster struck. In effect, Krugman is arguing that wind power is the Ted Cruz of electricity.

When assessing blame for a disaster, it’s hard to know what the relevant counterfactual should be. Yes, had the (relatively) unregulated Texas power providers done a better job in winterizing their natural gas lines, things would have been better last February.

But by the same token, had the federal government never implemented the wind production tax credit (PTC)—which subsidizes wind so heavily that it sometimes sells for a negative price in the Texas wholesale market—then there would have been more fossil fuel-generated capacity in Texas, which the numbers clearly show did better at providing electricity during the deep freeze. Normally the boosters of renewable energy point with pride to Texas, which has the most wind capacity of any state by far in absolute terms, and even has almost 25 percent of its official generating capacity consisting of wind. Yet when wind collapsed during the deep freeze, suddenly even its biggest fans admit that nobody ever thought it could do the same job as natural gas.