Why Biden and Krugman Are Wrong about the $15 Minimum Wage: News: The Independent Institute

President Biden claimed during his Super Bowl interview that “all the economics show” that if the government imposes a $15 minimum wage then “the whole economy rises.” For his part, Nobel laureate Paul Krugman has claimed for years that “[t]here’s just no evidence that raising the minimum wage costs jobs, at least when the starting point is as low as it is in modern America.” Is this really possible? Are all of the free market fans on the internet just spouting unscientific nonsense when they argue that a minimum wage hike will hurt unskilled workers?

The quick answer is no; Biden and Krugman are wrong. Although the empirical evidence regarding the minimum wage is not the slam dunk it once was, the studies that find a modest impact on employment couch their results in terms of a modest hike in the minimum wage. But the proposal to raise it from $7.25/hour to $15/hour involves a more than doubling. To my knowledge, not a single peer-reviewed econometric study has looked at the historical evidence and concluded that such a massive increase would have a negligible impact on employment.

In this article, I’ll review the scholarly research on the minimum wage to understand how Krugman can make such a slippery claim. I’ll then demonstrate that the proposed $15 minimum wage hike would be extremely aggressive and make it difficult for millions of young, unskilled workers to get a job in the first place.

The Textbook Treatment of Minimum Wage

In an introductory economics class, they can use supply and demand curves to illustrate a major problem with the minimum wage: By insisting that employers pay a higher wage than the market-clearing level, the government will cause a surplus or “glut” of workers on the market. For example, here’s the diagram from my introductory economics text (published by the Mises Institute and available as a free PDF): 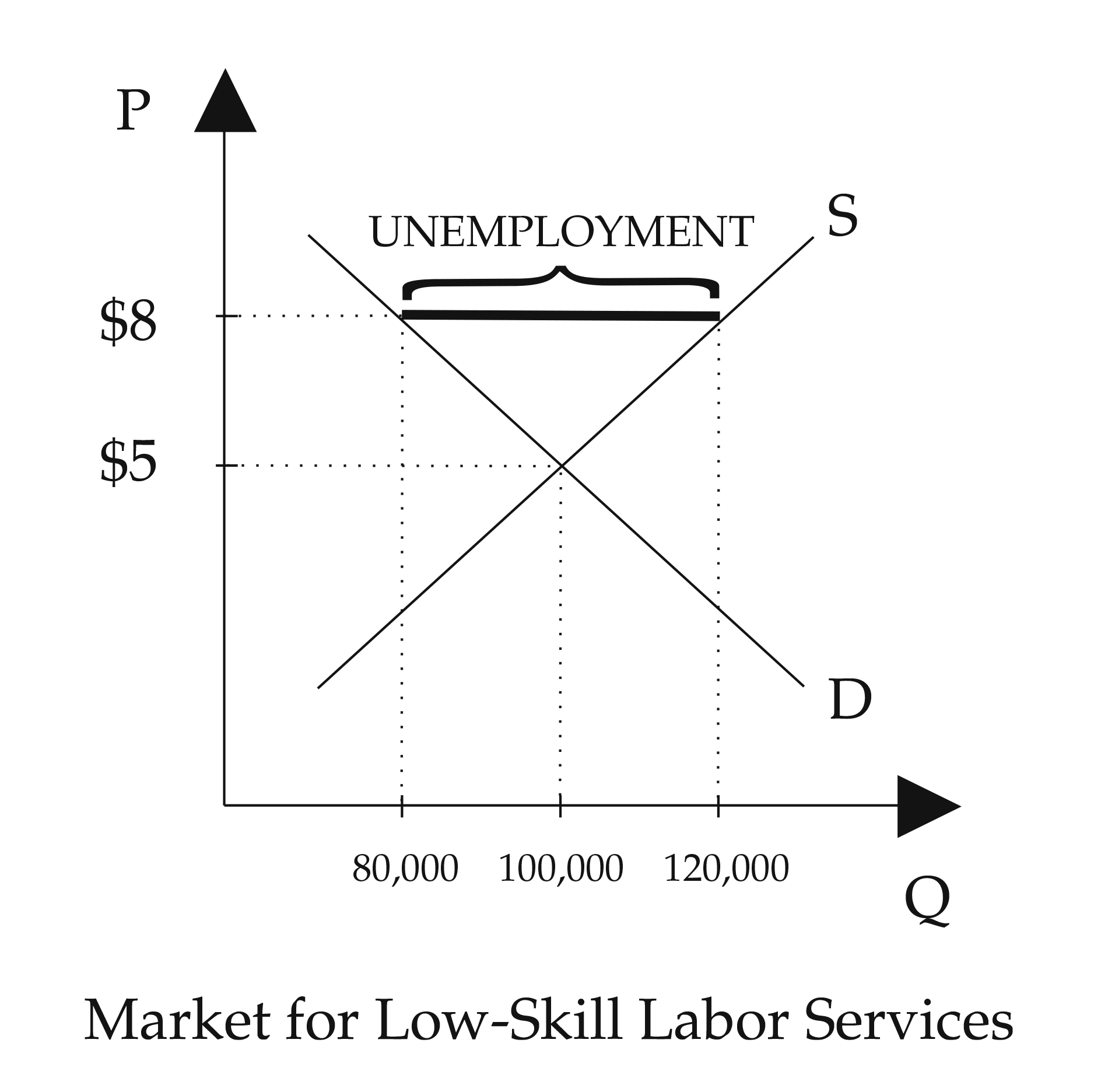 Then the government comes along and sets a minimum wage of $8 per hour. At this higher wage rate, the quantity supplied of labor goes up—more people want to work at $8 an hour than $5 an hour. On the other hand, the quantity of labor demanded drops: when inputs become more expensive, businesses tend to buy fewer units of them.

In the diagram, I supposed that at $8 per hour 120,000 workers wanted a job, but businesses only wanted to hire 80,000. So there is unemployment to the tune of 40,000 workers. Even though they have the same (low) skills as the people with jobs, and even though these 40,000 potential workers would be happy to take a job at the prevailing wage, they just can’t find a match with a willing employer.

Such is the conventional textbook treatment of the economics of a minimum wage. Although it raises hourly earnings for workers who keep their jobs, it makes it harder for low-skill workers to get hired in the first place. If we wonder why the teen unemployment rate is so high—especially for certain historically disadvantaged communities—the minimum wage is one obvious culprit.

It’s important to remember that the minimum wage doesn’t force an employer to hire a worker. Instead, it merely says that if you hire a worker, you have to pay at least such-and-such amount. If the worker in question doesn’t have sufficient skills and experience to produce that amount of additional revenue for the employer, it would be a losing proposition to give this applicant a job. Since most employers aren’t in business to run a charity, the natural response to a minimum wage hike is to “economize” on labor, by adding in more machinery and/or hiring a lower number of more skilled workers to do the job that was previously handled by a bunch of teenagers.

For most of the twentieth century, economists of all political stripes agreed with this basic story. The consensus in the empirical literature, as late as the early 1980s, was that a 10 percent hike in the minimum wage would lead to a 1 to 3 percent reduction in employment among teenage workers. (For a more detailed history of this literature, see my EconLib article.)

However, this consensus started collapsing in the 1990s. An important early volley was the (in)famous Card-Krueger 1994 paper, which looked at the case of New Jersey and Pennsylvania and concluded that, if anything, New Jersey’s state-level minimum wage hike increased employment in fast-food restaurants. Since then, there have been many studies that use various techniques to “control for” other variables besides the minimum wage, and which conclude that—contrary to the original wisdom—raising the minimum wage seems to have negligible effects on employment.

Now, to be sure, there are plenty of studies—some of which use similar econometric techniques to construct “control groups” to isolate the impact of the minimum wage “treatment effect”—that still do find that minimum wage hikes tend to reduce employment of low-skilled (such as teenage) workers. For example, Neumark and Wascher (2007) summarized more than a hundred studies published since the 1990s, from both the United States and abroad, and concluded that

So in the quote I relayed above from Krugman, where he said there’s “just no evidence that raising the minimum wage costs jobs,” he is being extremely misleading. What he means is that he rejects the several dozens of recent studies that all present such evidence because Krugman thinks they don’t adequately control for other variables as well as his preferred studies do. (In addition to my EconLib article, you can look at a study I coauthored for the Fraser Institute in which we summarized some of the important papers in this area.)

However, it’s not necessary for the reader to take sides on the empirical controversy. Even if we accept the “revisionist” studies at face value, they do NOT establish that a doubling of the minimum wage will have little impact on teenage employment. To repeat, their econometric results are typically expressed in terms of a 10 percent increase in the minimum wage variable. Surely Krugman and even Joe Biden (?) would agree that raising the minimum wage to $100 per hour would hurt workers, right? So at some point the empirical literature—focusing on modest hikes—obviously doesn’t apply. Since the proposal to raise the minimum wage from $7.25 to $15 involves a more than doubling, we are already in that territory.

For validation that I’m not engaged in right-wing scaremongering, the Congressional Budget Office (CBO) just released an updated assessment of the $15/hour plan. They conclude that the move would lift 900,000 people out of poverty but would also reduce employment by 1.4 million workers. Furthermore, of those 1.4 million, by 2025 half will have dropped out of the labor force altogether.

Before leaving this section, let me quote from a book review penned by a Nobel-winning economist who had similar things to say about the minimum wage to what I just said:

So what are the effects of increasing minimum wages? Any Econ 101 student can tell you the answer: The higher wage reduces the quantity of labor demanded, and hence leads to unemployment. This theoretical prediction has, however, been hard to confirm with actual data. Indeed, much-cited studies by two well-regarded labor economists, David Card and Alan Krueger, find that where there have been more or less controlled experiments, for example when New Jersey raised minimum wages but Pennsylvania did not, the effects of the increase on employment have been negligible or even positive. Exactly what to make of this result is a source of great dispute....

What is remarkable, however, is how this rather iffy result has been seized upon by some liberals as a rationale for making large minimum wage increases a core component of the liberal agenda—for arguing that living wages “can play an important role in reversing the 25-year decline in wages experienced by most working people in America” (as this book’s back cover has it). Clearly these advocates very much want to believe that the price of labor—unlike that of gasoline, or Manhattan apartments—can be set based on considerations of justice, not supply and demand, without unpleasant side effects. This will to believe is obvious in this book: The authors not only take the Card-Krueger results as gospel, but advance a number of other arguments that just do not hold up under examination. (bold added)

For those readers familiar with my podcast with Tom Woods, you will not be surprised to learn that the writer of the above book review was Paul Krugman, from 1998.

The $15 Minimum Wage Is Very Aggressive

According to fans of the minimum wage hike, namely the progressive Economic Policy Institute in a 2019 analysis, the $15 floor would directly raise the pay of 28.1 million workers who currently earn less than $15/hour. (In addition, the EPI estimated that 11.6 million workers earn more than $15 but would still see a pay hike as employers tried to distinguish their pay from the new minimum wage.) The 28.1 million workers represent about 19 percent of the wage-earning workforce.

In contrast, the previous round of minimum wage hikes was phased in starting in 2007, when the minimum wage was gradually raised (over two years) from $5.15 to $7.25. Another EPI study at that time praised the legislation, estimating that it would directly benefit only 5.6 million workers, which at the time was a mere 4 percent of the wage-earning workforce. Notice the huge contrast: the previous minimum wage hike only (directly) affected 4 percent of workers, but the current proposal would affect 19 percent.

Another way of assessing the aggressiveness of the current plan is to note that, even adjusting for price inflation, it would put the “real” minimum wage at the highest level in US history.

The proposed $15/hour minimum wage would be a bad idea in any economy, but it will be disastrous in our current context, where the economy has been rotting for a decade-plus from insane monetary policy and ludicrous federal budget deficits. Even according to fans, the proposal would impact almost quintuple the number of workers as the last round of minimum wage hikes (begun in 2007), and the current plan would push the minimum wage to a record-high level (even adjusting for price inflation). If the Biden administration wants to create an army of millions of young Americans who can’t get a job, this is a great plan.

RELATED
Which Economists Should Have Gotten Nobels Before They Died?
The Green Side of White Coat Supremacy
Scrap the Insurrection Act of 1807
California Rejects Four-Day Workweek, but Supporters Haven’t Given Up
Making the Case for Alito’s Courage
Whatever Happened to the $15 Minimum Wage?
Losing the People? Then Change the Rules
David Theroux: Gentleman, Scholar, Entrepreneur
Tearing Down the Silicon Valley Wall
University of California Suicide Watch
Water-Starved Citizens and Privileged Criminals
In a Nuclear World, Peace Strategy is Complex