Forget Paris: On the Second Anniversary of Trump’s Pullout: News: The Independent Institute

Two years ago, President Trump announced he would begin the formal process of withdrawing the United States from the Paris Climate Agreement. At the time, the media and climate alarmists went ballistic—for example, famed physicist Stephen Hawking said Trump’s action would push Earth “over the brink.” And yet, as I’ll show in this article, the Paris Agreement has always been a giant exercise in symbolism over substance; it wouldn’t come close to solving the climate “problem,” even on the terms of the alarmists. Whether one thinks climate change is a minor issue to watch, or a full-blown existential crisis, either way Trump’s action should be welcomed. By challenging the reverence for the Paris Agreement, Trump’s pullout gave permission for scientists and others to think about alternative approaches rather than globally-coordinated political control over energy and transportation.

Paris Agreement Was Going to “Fail” Even On Its Own Terms

The most important point to emphasize is that the Paris Agreement was not going to deliver humanity from the scourge of climate change, if we stipulate the alarmist rhetoric for the sake of argument. From the website ClimateActionTracker.org, here is the latest estimate of the Paris pledges and the implied level of global warming through the year 2100: 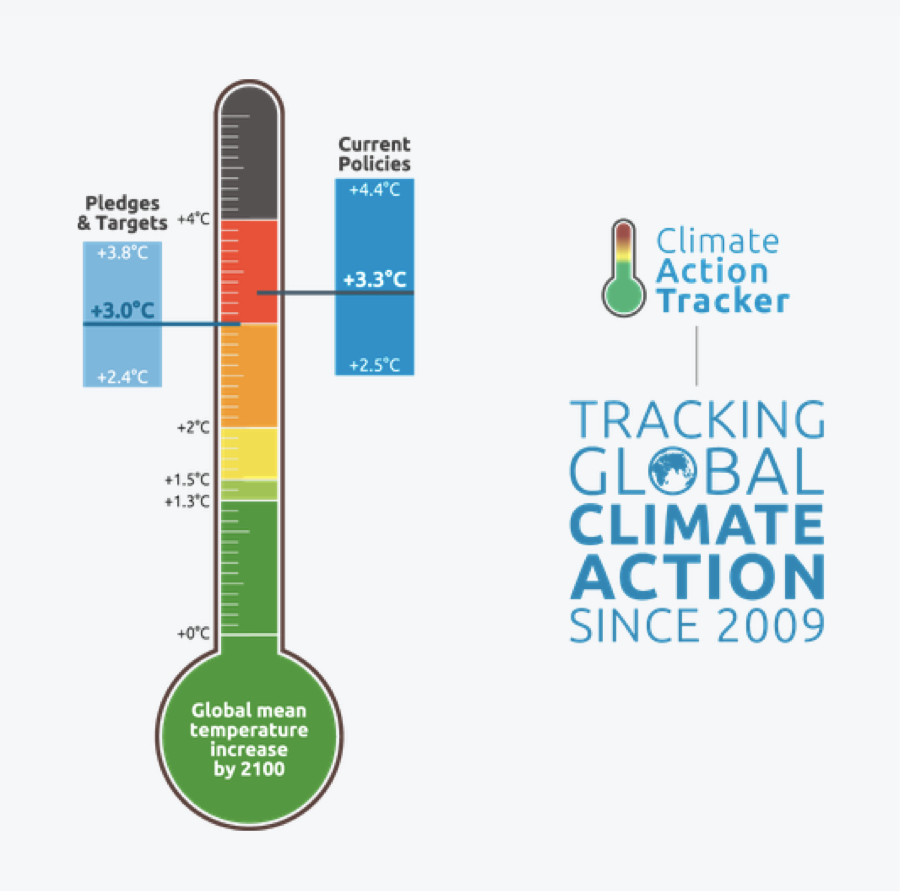 As the figure shows, even if all of the countries (including the U.S., which is still technically part of the Agreement) met their Paris pledges, warming is projected to hit 3.0 degrees Celsius—well beyond the “safe” levels of either 1.5 or at most 2.0 degrees, which are the now-fashionable targets.

What’s worse, the figure also shows that the actual policies now in place will yield projected warming of 3.3 degrees Celsius, because it’s easier to promise to do something than to actually do it.

For another piece of evidence, consider that back in April 2017, David Roberts at Vox updated his article arguing that no country on Earth was taking the then-popular 2 degrees Celsius target seriously. Note that this was before Trump made his announcement about Paris.

For these reasons, we shouldn’t take seriously the argument that Paris would’ve worked just great, thank you very much, except that Donald Trump came along and ruined it. (Rob Bradley patiently dismantles that particular claim over at MasterResource.)

Empty Pledges Are a Feature, Not a Bug

Now to be sure, the fans of the Paris Agreement would dismiss my criticism above, by arguing that once the basic framework of a global agreement is in place, then we can tighten down the screws and get some serious emission reductions.

Yet this is foolish optimism. The only reason so many countries signed up for Paris is that the pledges were non-binding, and beyond that, in many cases the pledges were virtually meaningless.

For example, Oren Cass back in 2015 explained that the “Intended National Determined Contributions” (INDC) of India and China were arguably less ambitious than what would probably happen under business-as-usual. In other words, India and China’s initial “bids” for what they could do to help in the battle against climate change, involved no actual sacrifice since it’s normal for countries to reduce their emissions-per-unit-of-GDP over time.

Even more hilarious, in a 2017 article Cass quoted from Pakistan’s pledge, which was “committed to reduce its emissions after reaching peak levels to the extent possible.” If you think about it, every country could quite confidently make such a pledge: Once emissions reach their peak, they would come down thereafter. That’s why the peak level would be a peak, after all.

To repeat, this is not a coincidence. The only way to get all of the governments of the world to sign on to Paris, was for them each to realize that they weren’t actually on the hook for anything. (Incidentally, the reason it’s the Paris Agreement and not the Paris Treaty is that the framers didn’t want the U.S. Senate during the Obama years to get a crack at rejecting it—the way they voted down the Kyoto Protocol during Bill Clinton’s Administration. This isn’t my conspiracy theory; the fans of aggressive government intervention on climate say the same thing.)

For this reason, it’s duplicitous for fans of Paris to cite it as a robust political framework with which to “get serious” about emission reductions. The near-unanimity of the deal would fall apart, once individual countries were expected to sacrifice their economic growth and take one for the team. Just look at the squabbling and chaos as more and more governments experience voter backlash against restrictions on conventional energy. Here’s how a lamenting New York Times article explained the situation back in December:

In August [2018], an effort in Australia to transition away from coal...resulted in the ouster of the prime minister. The man who succeeded him, Scott Morrison, endeared himself to the industry by bringing a lump of coal into Parliament.

In November, Brazilians elected Jair Bolsonaro, who had pledged to promote agribusiness interests in the Amazon forest...

In Poland, the host country of the latest United Nations talks, the right-wing president, Andrzej Duda, opened the negotiations by saying flatly that his country did not intend to abandon coal.

...Emissions in China have grown for the past two years, signaling the difficulties of shifting the country away from its coal-dependent industrial economy. Germany is having a hard time moving away from lignite because of political opposition in the country’s coal-rich east. The French president, Emmanuel Macron, faces unrest at home over a layer cake of taxes that working-class people say burdens them unfairly.

As the examples above indicate—and they ignore the plunging fortunes of aggressive climate action in Canada too—this is certainly not the fault of Donald Trump. Around the world, the natives are getting restless, and finally saying “enough is enough” to the technocratic “solutions” that drive up energy prices without even solving the ostensible problem of climate change.

President Trump has followed through on his campaign promises to roll back counterproductive regulations on energy, far more than most of us thought would be politically feasible. The Paris Agreement never had a chance of seriously denting global emissions, and all along has been a vehicle to redistribute wealth, to the tune of trillions of dollars, as I explained here at IER several years ago.

Since even the most ardent environmental activists admit that the Paris Agreement hasn’t come close to “solving” the problem of climate change, they should actually be thanking Trump for being the first to announce that it doesn’t work and ending this farce.

RELATED
An End to Tax Withholding
Is America Becoming Rome Versus Byzantium?
Don’t Commit to Defense of Taiwan
Why Americans Are Not Anxious to Get Back to Work
How the Fed Finances U.S. Debt
Can You Even Be an ‘Informed’ Citizen?
Down with White Coat Supremacy!
Code Red for Humanity—More Like a False Alarm
The Left Got What It Wanted—So Now What?
Putting a Proper Price on Spending
America and The Dying Citizen
The Woke Left’s Primitive Economics