The [Canadian] federal government’s website lists 177 main departments and agencies. Including their sub-bureaus, they make up a 15-page list. All this costs more than $180 billion a year. From 1992-93, when the deficit reached its peak, to the fiscal year ending this March 31, expenditures will have risen 15%; the deficit has been eliminated mainly by a 55% jump in revenues.

The upcoming federal budget should address the major problem, which is expenditures. But where could the government cut?

Of total federal government expenditures of $183 billion in 2002 (latest data on a national accounts basis, which is slightly different than the estimates), 20% was spent on servicing the public debt. The budget can do nothing about this item. 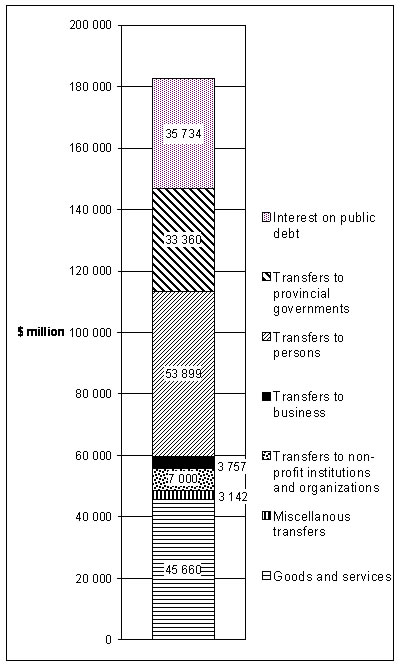 A big chunk—55% of federal expenditures—is made of transfers (i.e., grants and subsidies), mainly to provincial governments (18%), to persons (30%), to non-profit organizations (4%), and to businesses (2%). The state is, foremost, a redistributive machine.

Little can be done in the short run about provincial transfers, which are composed of equalization payments for close to one third, and of the Canadian Health and Social Transfer for nearly two thirds. However, an efficient long-run strategy for the federal government would be to replace these expenditures with tax transfers to the provinces.

Transfers to persons make up for 30% of total federal expenditures. Some 90% go to old-age security, guaranteed income supplement and spouse allowances, employment insurance, and child tax benefits. Although a significant part of these expenditures go to the non-poor, let’s assume that they are untouchable in the short run. There remains about $5 billion of transfers to persons that finance grants to researchers, artists, individual do-gooders, state propagandists and other favourites of the regime. Why not get a couple of billions back in the taxpayers’ pockets?

Transfers to non-profit institutions and organizations account for 4% of federal expenditures. The subsidies from the Sponsorship Program fall into this category but, at $20-million per year, they are only the tip of the iceberg. Most of these $7 billion in subsidies should be abolished quickly.

As for the $3.8 billion in business subsidies (which include agriculture), they have no economic justification either except in the sense that they serve to buy-off political clientèles. The estimates tabled on Tuesday include $1.5 billion to the Export Development Corporation, which helps other favourites of the regime. All these subsidies should be abolished. In the short run, substantial cuts should, and could, be made.

The same is true for our miscellaneous transfers category ($3.1 billion)—mainly subsidies to international organizations and states. In many cases, and to call a fat cat a fat cat, they are subsidies to help foreign tyrants hire rich Canadian consultants.

These calculations indicate that total transfers could be reduced by $15 billion without hurting the poor.

The remaining 25% of federal expenditures ($46 billion in 2002) purchase goods and services. About one half of this is spent on the bureaucrats’ remuneration. Freezing hiring and remuneration could make significant savings. But they who run the state would probably go on strike. Although they would do less harm on strike than by regulating us, let’s leave the bureaucrats more or less alone (for now), and try another approach.

A mere 10% of total federal expenditures goes to what Statistics Canada calls protection of person or property. Moreover, these $18 billion include not only expenditures on federal police, justice and national defence, but also regulatory measures, i.e., some of the 177 bureaus such as, for example, the Canada Firearms Centre.

We may thus safely assume that 90% of the $23 billion in purchases of goods and services (excluding remuneration), i.e., about $20 billion, are not related to the protection of person and property. Cutting by, say, 33% would save $7 billion.

Very conservatively, we have isolated some $20 billion ($15 billion in transfers and $7 billion in goods and services) of expenditures that could be eliminated. Federal expenditures could be cut more than 10%, again without even challenging the official welfare state.

Of course, we would expect lots of protest from the privileged beneficiaries of the taxpayers’ coerced largesse, including from the bureaucrats who would lose paper, pencils, furniture, outside consultants, travel expenses and other perks (more than $2 billion is spent annually on travel and propaganda).

Technically, the budget is about taxes, raising the revenues necessary to finance the expenditures presented in the estimates (last Tuesday). The old, orthodox view of public finance is that essential public expenditures are decided first, then matching taxes are raised. A new "public choice" approach argues that Leviathan works the other way around: It maximizes taxes, i.e., grabs what it can get away with, and then spends the money on its pet projects. In this perspective, the more revenues on which the state can put its hands, the more it will spend.

The only way to control the state’s expenditures becomes to dry up its revenue sources. If it is serious, the upcoming budget would cut taxes globally by at least 10%. It would also explore ways to prevent future governments from getting through deficits what the taxpayers deny it, but the deficit is not as much a threat as continuously expanding revenues.

If the Cabinet had to arbitrage among survivors after a 10% drop in government revenues, I suspect many bureaus, such as the Canadian Broadcasting Corporation, the Canada Firearms Centre or the Canadian Radio-television and Telecommunications Commission (just to name a few), would be happily starved to practical death.

Pierre Lemieux is a Research Fellow at the Independent Institute and an Economist in the Department of Management Sciences at the Université du Québec en Outaouais (Canada).

RELATED
The World Is Facing Its Day of Inflationary Reckoning
Time to Stop Coddling Crypto
Congress Has a Stake in the Dollar’s Integrity
Our Spanish Civil War?
Ditch the Global Minimum Tax Grab
Putin May Fear Default More than Defeat in Ukraine
Denial of Russian Access to Bank Transfers Was Once Likened by Russia’s Prime Minister to an ‘Act of War’
Economic Theory and Public Policy
Could a Collapse of Cryptocurrencies Force a Reform of the Global Monetary System?
Never Let a Plague Go to Waste
Time to Listen to the Coronavirus Dissidents
China’s Crackdown on Think Tank Illustrates Importance of Hong Kong Protests