Say what you will about the climate policy discussions at Vox, but they don’t mince words. They come right out and tell you how much they want to micromanage every last detail of your life. Vox’s resident expert, David Roberts, recently interviewed policy wonk and author Hal Harvey, to discuss which areas of society government should regulate in the name of slowing climate change. Everything was on the table—ranging from building codes to auto fuel efficiency to diet to family size—with the only debate being over the relative results from the various interventions.

Among other results, this peek into the interventionist mentality should serve as a wake-up call for the few writers who keep charmingly calling on libertarians and conservatives to strike a carbon tax deal with progressive leftists. As the Roberts/Harvey discussion says quite plainly, a carbon tax is just one arrow in the quiver of those championing aggressive government intervention to slow climate change.

A Carbon Tax Is Not Enough

Let me validate the carbon tax claim first. Here’s the key exchange from the Vox interview:

These days, people across the political spectrum are talking about carbon pricing. How does it fit into the larger effort?

The thing about carbon pricing is, it’s helpful, but it’s not dispositive. There are a number of sectors that are impervious to a carbon price, or close to impervious.

A carbon price works when it’s part of a package that includes R&D and performance standards. It does not work in isolation. It helps, but it doesn’t do nearly as much as is required.

Harvey elsewhere in the interview explicitly criticizes the standard “market solution” rhetoric behind a carbon tax when he says:

[Government-mandated performance standards] have a bad rep from an age-old and completely upside-down debate about “command-and-control” policy. But we use performance standards all the time, and they work really well. Our buildings don’t burn down very much; they used to burn down all the time. Our meat’s not poisoned; it used to be poisoned, or you couldn’t tell. And so forth. If you just tell somebody, this is the minimum performance required, guess what? Engineers are really good at meeting it cost-effectively.

In addition to their (naïve) promises of revenue neutrality, those pushing for a carbon tax swap deal also promise conservatives and libertarians that a “price on carbon” would allow for the dismantling of the existing top-down regulations. Yet we now have several lines of evidence to show just how naïve this hope is: (1) Harvey in the quotation above throws them under the bus. (2) The recent Curbelo carbon tax bill contained no *meaningful* regulatory relief. (3) Economist Paul Krugman is fine with outright bans on new (and existing?) coal-fired power plants, and (4) the people at Vox have said for years that a carbon tax would only work in conjunction with other anti-emission government policies. Notice that I am not scouring obscure subreddit threads to find Marxists posting from a hipster café, I am quoting from quite mainstream sources who are openly declaring that putting “a price on carbon” will not do enough to reduce emissions.

The reader should also realize that Roberts and Harvey don’t merely consider fuel economy standards and building efficiency codes when it comes to “command and control” regulations. Everything is on the table, and the only reason to refrain from pursuing certain strategies is the dilution of political capital. The following excerpt illustrates:

The book also has nothing about behavior change — no turning off lights or going vegetarian. Do you find that lever unrealistic?

It’s a policy design book, and there aren’t many policies that have people change their diet. Michael Bloomberg taxed sugar, so there’s one. But we’re not gonna have the tons-of-barbecue-per-capita tax in North Carolina...

Trying to invoke behavior change on something as personal as eating en masse is morally sound, it’s ecologically a good idea, but as a carbon strategy, it doesn’t scratch the surface.

Indeed, even when they give a nod to basic human rights, Roberts and Harvey sound creepy. Consider this exchange:

Paul Hawken’s Drawdown Project looked at options for reducing greenhouse gases and found that educating girls and family planning were the two most potent.

When I was at the Hewlett Foundation, we sponsored a study by the National Center for Atmospheric Research that asked the question: Globally, if you met unmet need for contraceptives — that is to say, no coercion whatsoever — what would it cost and what would the carbon impact be?

We found large-scale abatement at less than a dollar a ton. So I’m completely in favor of that. [Bold added.]

It’s the part in bold that is chilling. For starters, I point out that this is the one area of life—the decision on how many children to have—where Harvey apparently feels that the government should not be using coercion to alter people’s behavior; coercive interventions in every other arena—from building design to diet to urban transit—were only tempered by pragmatic considerations.

Beyond that, the reason Harvey had to stress that his approach would be voluntary is that historically, this wasn’t taken for granted. There is a long and sordid history of wiser-than-thou social planners forcibly restricting how many children others could have, all in the name of some higher social good.

Indeed, Vox’s founder—Ezra Klein—recently got himself into an awkward spot when the website originally promoted his discussion with Bill Gates using the following tweet: 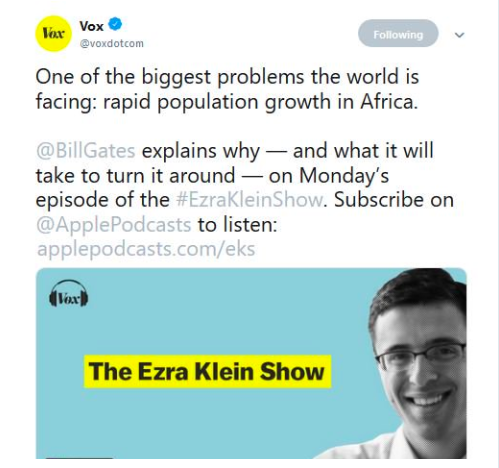 Vox quickly deleted the tweet after outrage and advertised the interview in a more sensitive manner, but the whole episode offered another peek into the interventionist mindset.

On these pages I have tirelessly pushed back against the small but vocal group of pundits and scholars who call on conservatives and libertarians to accept a carbon “tax swap deal” with leftist progressives. Beyond their failure to appreciate some of the technical nuances in the tax literature, these pleas overlook the simple fact that the mainstream thought leaders among the wonkish progressives have long since moved beyond the idea of a simple “price on carbon.” Every aspect of our lives, from our cars to our meals to our family sizes, affects global emissions—and therefore the interventionists want every tool at their disposal to control others.