What Are You Thankful for? Here Are Five Awesome Global Trends: News: The Independent Institute

But things used to be worse, and now they are getting better. Much better, by a lot of margins. Thomas Hobbes wrote that in the state of nature life is solitary, poor, nasty, brutish, and short. But things have changed a lot in the last three centuries or so, and the lives we live today are connected, rich, clean, peaceful, and long. Here are just five trends that make me optimistic (and if you want more reading, here’s Mark Perry with fifty).

Solitary No More: Literacy is Connection

The social media revolution of the last few decades has been obvious--you are going to give thanks today with lots of people physically but lots of other people virtually as you wish one another a happy holiday or good-naturedly taunt one another during a football game via your social media channels.

Or maybe, if you’re kind of an introvert and all the actual being around actual people is a little overwhelming, you’ll curl up on the couch with a good book and connect with great characters and great ideas, taking part in a global conversation spanning the millennia. In 1800, most people in the world wouldn’t have been able to do that because they were illiterate and, therefore, cut off from the kind of connection across space and time that literacy allows. Today, we’ve seen a near-total inversion as about 85% of the world’s population of people aged fifteen and older are literate. 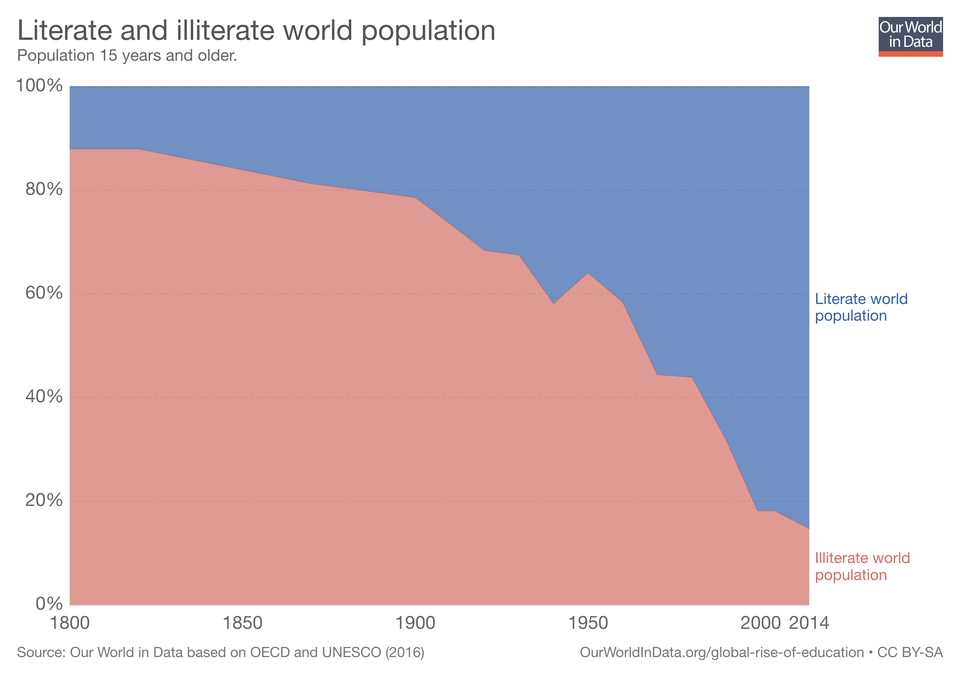 Poor No More: The World Is Getting Richer.

Virtually everyone everywhere was very poor a couple of centuries ago, but since then Europe and its overseas offshoots staged a daring escape from poverty--and the rest of the world has been started catching up.

Internationally, there is cause for great Thanksgiving. The Brookings Institution reports that, for the first time, more than half of the world’s population is "Middle Class" (which they define as "households spending $11-110 per day per person in 2011 purchasing power parity"). It’s a broad measure, and $11 a day it is, as my coauthor Deirdre McCloskey’s mother would say, "no bag of bluebirds." It’s a far cry from extreme poverty ($1.90 per person per day) and over three times the average of something like $3 per person, per day that humankind has made do from time immemorial until just a few centuries ago. 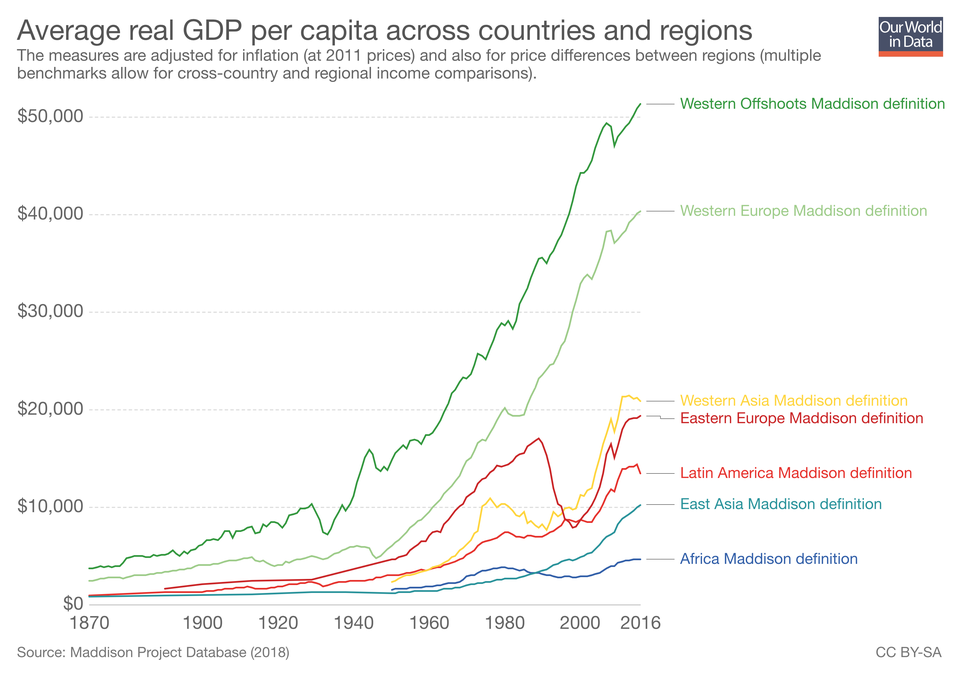 Consider one of the major problems of modernity in wealthy countries: obesity. Where our ancestors starved, our problem today is that we have too many cheap, tasty calories. And today, literally, is a perfect example. Mark Perry of the American Enterprise Institute reports that, according to the American Farm Bureau Federation, the inflation-adjusted cost of a Thanksgiving meal "is lowest since 2010 and 26% lower than 1986." Using average hourly wages, he notes that the "time cost"--the number of hours you would have to work to be able to afford the meal--has fallen by a third from 3.21 hours to 2.14 hours since 1986.

Nasty No More: The World is Getting Cleaner. 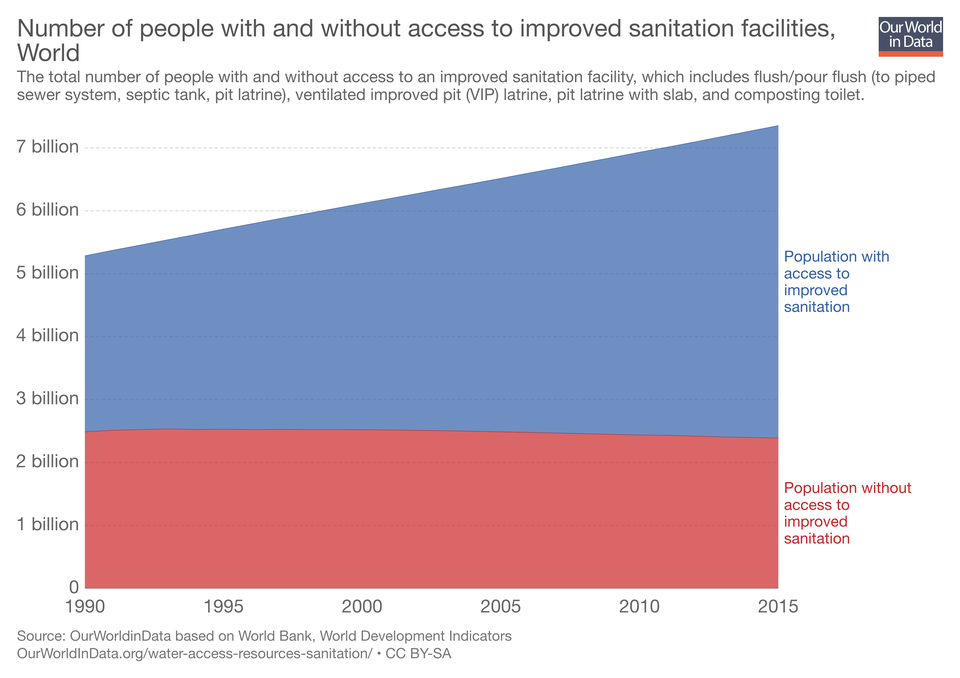 Sanitation improvements are among the most important advances of the last century. We can get clean, drinkable, not-infested-with-parasites-and-therefore-will-n0t-kill-you water pumped into our homes in practically unlimited quantities. Importantly, flush toilets and garbage collection mean refuse can be whisked away so that we don’t have to live in our own filth. As recently as 1990, only about half of the world’s population had access to "improved sanitation facilities" (like flush toilets). By 2015, that fraction had fallen to about one-third--and the absolute number of people without access to improved sanitation had fallen from 2.49 billion to 2.39 billion.

One of the regular features on economist Don Boudreaux’s blog is "Cleaned By Capitalism." Think about (just to use one example) your teeth. They are cleaner and healthier--and your breath is a lot better--thanks to innovation and market forces.

Brutish No More: The World is Less Violent.

There was a slight increase in homicide rates by age group in the 1990s, but it has been falling steadily since then. Furthermore, as the psychologist Steven Pinker has written, violence more generally has fallen. 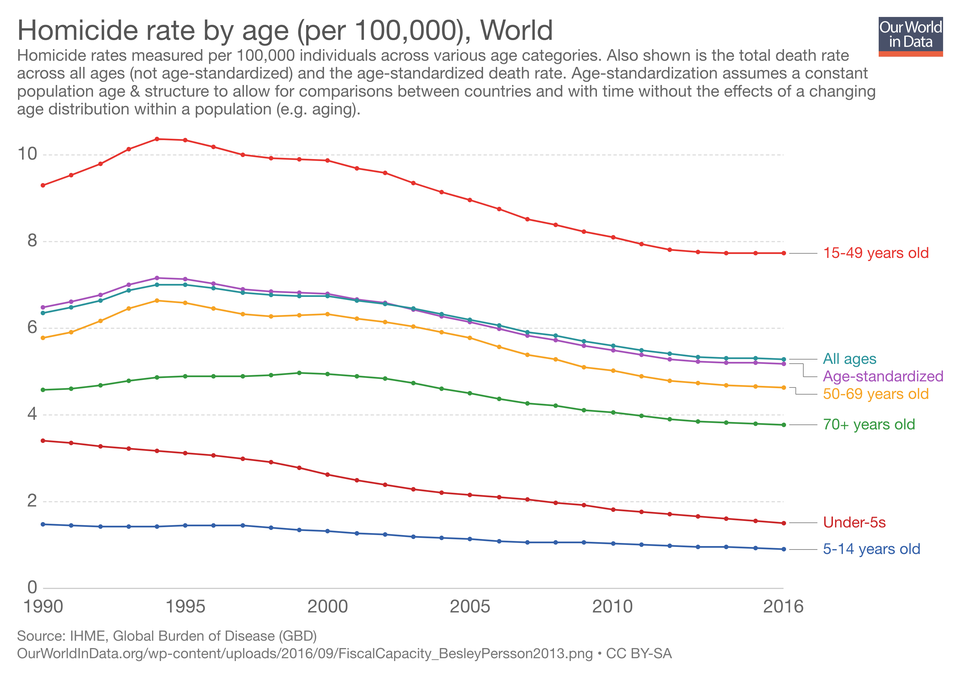 Here’s a TED Talk in which Pinker explains the decline in violence more generally. Social media and the 24-hour news cycle make it easy to get a constant stream of horror stories from around the globe, but this paints a misleading picture of the average human experience.

Short No More: There Are More People Living a Lot Longer. 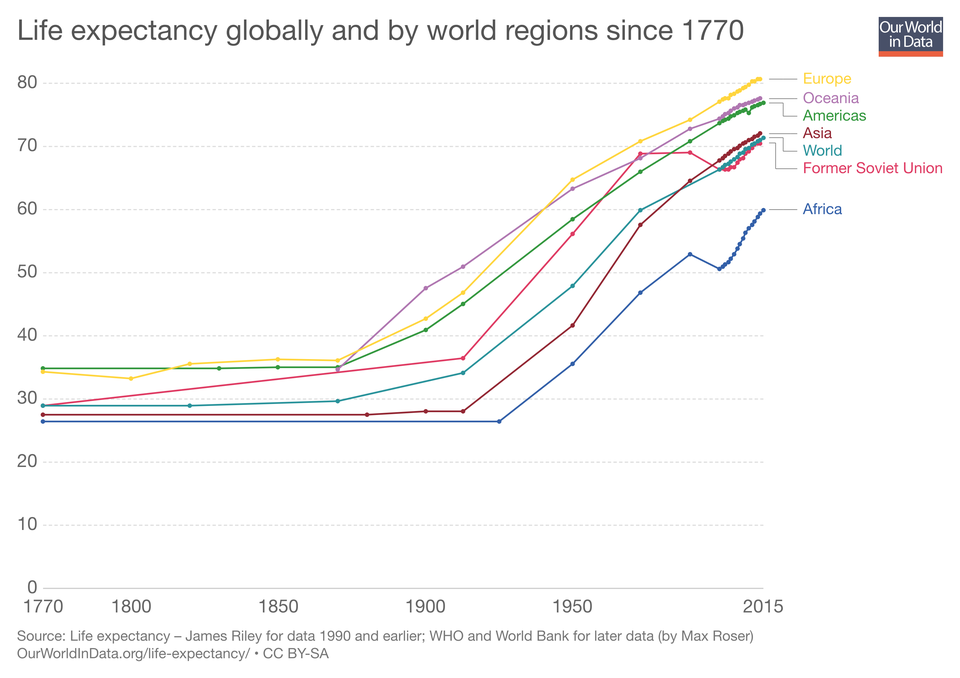 There are a lot more people in the world today, and we live a lot longer. In 1770, life expectancy everywhere was below 40, and everywhere but Europe and the Americas it was under 30. Since then, however, life expectancy has more than doubled globally, and we and our children can expect to live to ripe old ages.

Despair No More: The World is Richer, Cleaner, and Safer Than Ever Before.

This isn’t to minimize genuine tragedy happening around the world, or in your life, or in mine. But a dose of perspective is in order as we give thanks. If you’re tempted to despair this holiday season, remember just how much better things have gotten compared to how they used to be. And that’s something to be thankful for.

RELATED
The GOP Needs to Go Back to Sound Principles on Free Enterprise, Small Government, and Legal Immigration
Fine. Blame Ticketmaster for the Taylor Swift Fiasco, but Don’t Overlook the Fundamental Cause.
Can’t Get Taylor Swift Tickets? Blame Other Fans, Not Ticketmaster
End the COVID National Emergency Now
Let Them Compete: Labor Markets Are Workers’ Friends, Not Their Enemies
Why Do Progressives Support Democrats? Part Two
There Are 8 Billion People. We Should Celebrate Superabundance, Not Lament ‘Overpopulation’
What Difference Did the Election Make?
Why Do Progressives Support Democrats? Part One
Enjoyment of the Upcoming World Cup Will Come at a Price
Diabetic Complications and Economic Fundamentals
Where Is the Free Market Utopia?