←  ISSUES
INTERVIEW
Interview with Robert Higgs
May 21, 2013
By Robert Higgs
Also published in The Journal of Peace, Prosperity, and Freedom Fri. April 12, 2013  « Show Fewer
Robert Higgs is a Senior Fellow with the Independent Institute, and is well known for his work on economic history (among other things). Having earned his PhD in Economics from Johns Hopkins University, he has also been a visiting scholar at Oxford University and Stanford University, and has held teaching positions at the University of Washington, Lafayette College and Seattle University.

You built your career in academia and then shifted to the Independent Institute, a research organisation funded by sympathetic donors. What are the main differences between academia and working at a think-tank?

In academia, my prime concern was teaching and training students. In my affiliation with the Independent Institute, my major responsibility was editing the institute’s quarterly scholarly journal The Independent Review.

In my research and writing I was completely independent in both situations. In academia no one ever prescribed what type of research I would do, how I would do it, or what conclusions I would reach. In my work for the Independent Institute, which now continues on a reduced basis, I have enjoyed the same intellectual independence.

Whether nonacademic work is more or less intellectually constrained depends on the organization one works for and the type of work one does. I have been fortunate in both regards.

You wrote a memorial piece for Murray Rothbard which was published by the Mises Institute. However not everyone is a fan of Rothbard; George Selgin—who has had disagreements with Rothbard on monetary issues—thinks he is a nut on fractional reserve banking, and David Friedman has blogged critically about Rothbard (see here and here), calling him intellectually dishonest. I was wondering your thoughts on these debates between wings of the movement.

Murray Rothbard was a personal friend of mine and also someone whose intellect and accomplishments I have always held in high regard. George Selgin is an old friend of mine, and I have known David Friedman for a long time. I try to avoid infighting among libertarians, some of which springs from personal enmities and eccentricities.

It is entirely to be expected, however, that economists in general and libertarian economists in particular should differ somewhat in their views. We do not belong to a cult. Lock-step conformity is neither required nor admired by people who have intellectual integrity. If all libertarian economists held the same views, that situation would signify that our discipline had stultified. Lively controversy is all for the good. It would be best, of course, if people kept their differences on an intellectual plane and did not descend to personal invective or insinuations, but libertarian economists are subject to the usual assortment of human foibles.

Why is Rothbard not taken more seriously by economists?

Rothbard upheld the Misesian approach to economics, which maintains that economic theory is an a priori body of logically connected propositions resting at bottom on the Action Axiom—that “human action,” by definition, consists of the purposive attempt to attain chosen goals by the use of chosen means. (Rothbard did differ with Mises in his understanding of the epistemological status of the Action Axiom, but he did not consider this difference especially important.) In this approach, economic theory is apodictically certain: its propositions are necessarily true as long as they are correctly deduced from the Action Axiom and other incontestable propositions.

Mainstream economists reject this approach to economics (which, by the way, was espoused by many economists in the nineteenth and early twentieth centuries). Modern economics rests on positivistic epistemological foundations of the same sort that (mainstream economists suppose) undergird the work of researchers in the natural sciences. Mainstream economists build models, derive testable hypotheses from these models, and use statistical methods to test the hypotheses. If the observed data are inconsistent with a hypothesis, the economist (in principle) either abandons the hypothesis or returns to the theoretical drawing board to reformulate the model in a way that can account for the variations in the observed data.

Misesians such as Rothbard view the mainstream approach as unsuited to the study of human action, which is always situated in a “complex” and changing context so that no theoretical ceteris paribus proviso is ever satisfied; nor can the researcher artificially impose this proviso statistically in an empirical test. Mainstream economics treats the human actor as no different from an atom or a molecule, expecting that the actor will always behave (at least as a central tendency) in accordance with some fixed “law,” whereas Misesian economics sees the human actor as having the capacity to change his goals, select new means of achieving them, and alter his relative valuations at any moment—hence, in Mises’s expression, there are no constants in economics.

Mainstream economists regard themselves as scientists and regard Misesians such as Rothbard as kooks, so naturally they pay no attention to his work. They view him and others like him as cultists or ideologues. I need hardly add that I consider them wholly mistaken in this regard.

What do you know of Australia and would you ever consider visiting us here?

I know a bit about Australia from having had good Australian friends—above all, the great Max Hartwell—and from having had American friends who have visited or lived for a while in Australia. I very much doubt that I will ever be able to visit there myself, however. I am on the verge of retirement, and I will be emigrating (I hope before the end of 2014) to a remote location in Mexico. Once I’ve left the USA, I probably will not travel anywhere except locally in Mexico and perhaps in Central America (I have many friends in Guatemala.)

One of Australia’s free-market think tanks published a policy monographentitled ‘Why Does Government Grow?’ which points out that non-combatants during World War II experienced comparable expansions in the size and scope of government (p. 15 of the monograph). Does this line of argument undermine the argument that crises—in this case, wars—are the culprit when it comes to government’s growth?

As I wrote in the first chapter of my book Crisis and Leviathan, the modern growth of government has various sources. The researcher’s job is to identify which of them have operated at specific times and places and to determine how much weight to give each of them. Crises certainly have been a fertile source of the growth of government in the USA, many Western European countries, and elsewhere. The detailed historical research on this claim leaves little doubt of its truth.

World War II, however, drew in almost all of the world’s major countries. Of those not drawn in, some experienced the same effects, springing from the same causes. For example, Sweden, which was not a belligerent in either world war, nevertheless prepared for war in both instances, in case it should have to defend itself against attack. The actions the Swedish government took in order to prepare for war closely resembled the actions other countries’ governments took in order to prepare for war and then to engage in it. One should not be misled by formalities such as whether a country declared war or by whether it sent soldiers to fight in it. The important changes prompted by war pertain to the new and expanded powers that governments exercise in connection with war or preparation for war.

Moreover, economic and political history is not physics. In one’s explanation of the growth of government, there is no reason to expect or to insist that a single model must fit every country in the world. Finding cases in which war was not a prime culprit does not, in itself, refute the finding that in other cases war was the prime culprit.

In my work on U.S. history since the late nineteenth century, crisis (along with certain ideological preconditions) is the critical event. War is the crisis that has the greatest effects because it is the one that creates the greatest public fear and therefore leads the public to demand or to acquiesce in the government’s exercise of new or expanded powers ostensibly to allay the perceived threat. However, other crises, such as the Great Depression and other economic turmoil, may also have the capacity to elicit similar expansions of government power and activity because they, too, cause great public fear and apprehension about the security of people’s livelihoods and property values.

More workaday reasons for the growth of government also exist, including those emphasized by mainstream economists under the unfortunate rubric of “market failure.” In my work, however, I have yet to find a historical case in which these sources merit heavy explanatory weight.

One also needs to recognize that what happens in one country, whether it has fought in recent wars or not, affects other countries, including those that may have avoided the fighting. Ideological changes spill across the globe, affecting redistributional politics, government policies, and many other developments. Commercial and financial relations severed or altered during a major war also bear on countries everywhere. International migrations are affected, both in their volumes and in their sources and destinations. A country can scarcely remain unaffected if a major war is occurring somewhere on earth, and some of these effects promote the growth of government.

What would you say to aspiring scholars—is it possible to carry out an Austrian research program in the social sciences and succeed in gaining employment at a major research university? Is good work published in the leading journals and recognized by faculty irrespective of the particular argument put forward by the author?

It is extremely difficult for Austrians to get a job in a top tier university or to place their articles in leading professional journals—not impossible, but extremely difficult. Austrians can succeed in getting jobs at second or third tier schools and in placing their articles in second or third tier journals, but, again, given the overwhelming dominance of the neoclassical paradigm in mainstream economics, even this degree of professional success is quite difficult.

You are now entering retirement. Are you pessimistic or optimistic about the prospects for people understanding just how much unnecessary death and destruction governments cause?

I do not expect that many people will ever appreciate the full extent of the state’s destructiveness. The state has all the advantages, from public schooling to the statist news media to almost every major institution with real power and influence in society. Of course, it has vast funds at its disposal, too, looted from the productive members of the public. People are therefore exposed, from the cradle to the grave, to indoctrination and propaganda tilted in the state’s favor. Very few ever raise the pertinent questions about the state, much less answer them correctly.

States sometimes fail, of course, but when they do, new states quickly replace them, as most people want. Modern people, for the most part, are unwilling to assume the same degree of personal responsibility that their ancestors assumed. They have therefore sold their souls to the state, looking to it for personal and economic security and relying on its general beneficence. In this regard, they evince the triumph of wishful thinking over realistic understanding.

Robert Higgs is Retired Senior Fellow in Political Economy, Founding Editor and former Editor at Large of The Independent Review.
EconomistsEconomyPhilosophy and Religion

Elizabeth Warren, the Flips, and the Fight

University Trustees Are Often Clueless: Does It Matter? 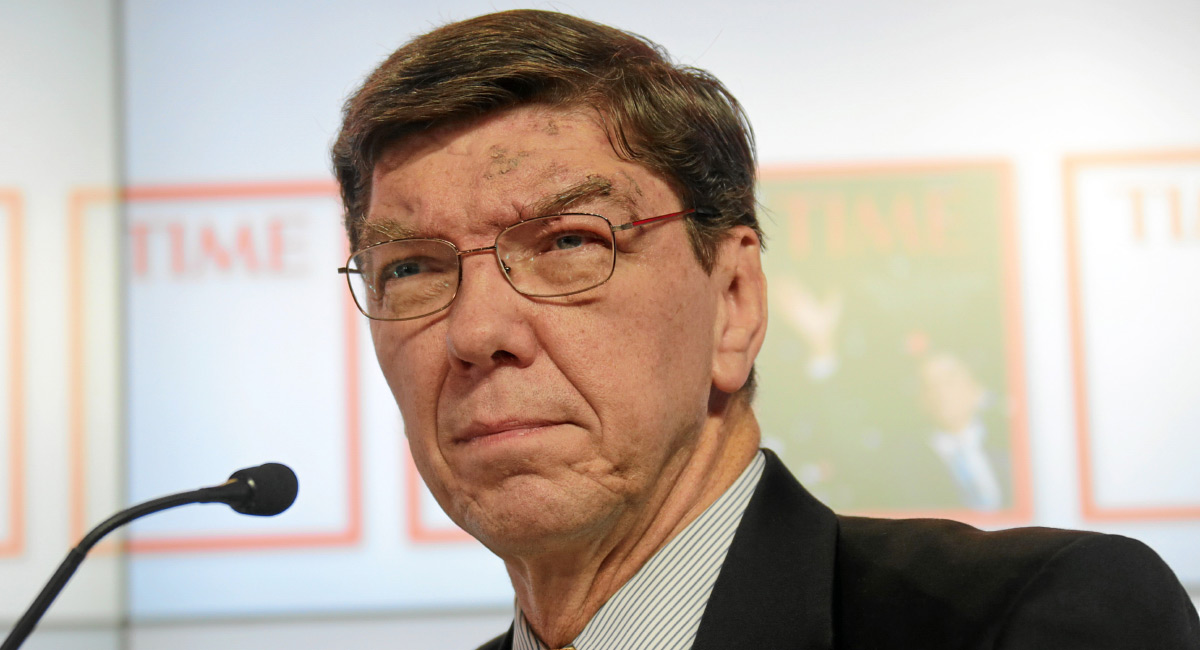