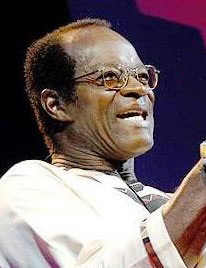 Dr. Ayittey is the author of the books, Africa Unchained: The Blueprint for Development, Africa in Chaos, The Blueprint for Ghana’s Economic Recovery, Africa Betrayed, Defeating Dictators: Fighting Tyrants in Africa and Around the World, and Indigenous African Institutions. Africa Betrayed won the H.L. Mencken Award: “Best Book for 1992,” and in 2009, he was selected by Foreign Policy magazine as one of the “The World’s Top 100 Global Thinkers.”

A contributor to numerous scholarly volumes, as well as The Wall Street Journal and The Los Angeles Times, he served as Contributing Editor to the Journal of Defense and Diplomacy and has consulted on various economic policy issues with the World Bank, U.S. A.I.D., U.N.D.P. and other international organizations. He appeared on numerous radio and television programs, including NPR, BBC, Radio Canada, CNN, NBC, CTV (Canadian), among others. He further testified before the Senate Foreign Relations Committee, Presidential Advisory Council on HIV/AIDS, House Africa Sub-Committee, and Standing Committee on Foreign Relations of the Senate of Canada.

Dr. Ayittey was the recipient of the Canadian International Development Agency Award, University of Ghana Award, and the Mellon Faculty Research Award from American University. He was nominated for The Africa Prize for Leadership by The Times of London, invited to the White House by Presidents George H.W. Bush, William Clinton, and George W. Bush, and invited to the G-8 Summit in 2005 by the German Marshal Fund.