Larry J. Sechrest (1946–2008) was a Research Fellow at the Independent Institute, and Professor of Economics and Director of the Free Enterprise Institute at Sul Ross State University in Alpine, Texas. He received his B.A., M.A., and Ph.D. from the University of Texas at Arlington, where his undergraduate work was in history and philosophy with graduate work in economics and finance. He was a Foundation Scholar with the Foundation for the Advancement of Monetary Education in New York City and also served as a Trustee of the Free Radical Foundation in Wellington, New Zealand and on the Board of Advisors of the Defense of Freedom Foundation in Newport Beach, California.

He presented papers or gave invited lectures in Washington, D.C., San Francisco; New Orleans; New York City; Houston, Texas; Auburn, Alabama (on several occasions); Oberlin, Ohio; Charlottesville, Virginia; San Antonio, Texas; Charleston, South Carolina; Columbia, South Carolina; Cancun, Mexico; and York, England. In addition, he had been elected to membership in the prestigious New York Academy of Sciences. He was a member of the Editorial Boards of both the Quarterly Journal of Austrian Economics and the Journal of Ayn Rand Studies. 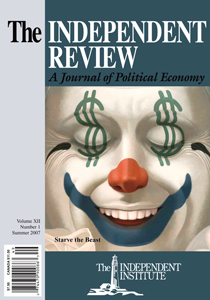