←  ABOUT US
About
›
Board of Advisors, In Memoriam
›
Person Detail
Arthur Seldon 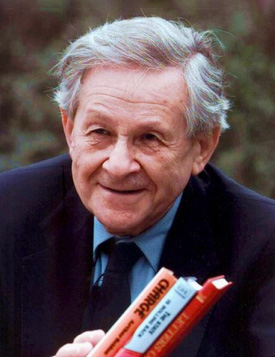 Arthur Seldon CBE was Founder-Director of the Institute of Economic Affairs (IEA) in London and a founding Member of the Board of Advisors for the Independent Institute.

Seldon was born Abraham Margolis in the East End of London to Masha and Pinhas Margolis, who came to Britain from Kiev, Ukraine, fleeing the anti-semitic pogroms in 1903-1904. The family was very poor: his father worked making caps at a Jewish immigrant's factory, Goldstein & Co. Seldon's brothers Susman and Solly changed their names to Cecil Margolis and Sidney Margolis; only Abraham changed his whole name. When his parents both died in the Spanish flu pandemic of 1918, his uncles' families took the boys in, and then sent them away to school. Abraham was put up for adoption by a cobbler, Pinchas Slaberdain, and his wife Eva in Stepney. Seldon never forgot where he came from and the intense poverty that had shaped his family's arrival in England. But rather than turning for help to government, he worked hard, first at school, and then to get a tertiary education becoming self-reliant.

Seldon was educated at Sir Henry Raine's Grammar School where he was influenced by History Master E. J. Hayward's interpretation of the cottage industry's transition to capitalism. A scholarship paid for the London School of Economics where he read Friedrich Hayek, Arnold Plant and Lionel Robbins serving to deepen his interest in classical liberalism. Friedrich Hayek's bestselling book Road to Serfdom introduced him to the Austrian school of economics.

In 1970 Seldon invited Milton Friedman to speak at the IEA, which was quick to recognize the value of monetarist policy. As a result, the ideas imported from the University of Chicago had a great influence on members of the Conservative Party, especially Enoch Powell, Sir Keith Joseph, and Margaret Thatcher. He organized a conference in 1978 called "Economics in Britain" that featured the American economist James Buchanan, co-founder of Public Choice. In 1980 Seldon founded the IEA's journal Economic Affairs.

Seldon won the Fisher Arts Literary Prize in 1991 for his book Capitalism, and he received an honorary degree in 1999 from the University of Buckingham. Among his additional books are The Virtues of Capitalism; Government Failure and Over-Government; Everyman's Dictionary of Economics; The Welfare State: Pensions, Health, and Education; Charge; IEA, the LSE, and the Influence of Ideas; Introducing Market Forces into Public Services; The State is Rolling Back; Corrigible Capitalism, Incorrigible Socialism: A New Approach to an Age-Old Debate; and The Dilemma of Democracy: The Political Economics of Over-Government.