←  ABOUT US
About
›
Person Detail
Ronald H. Coase 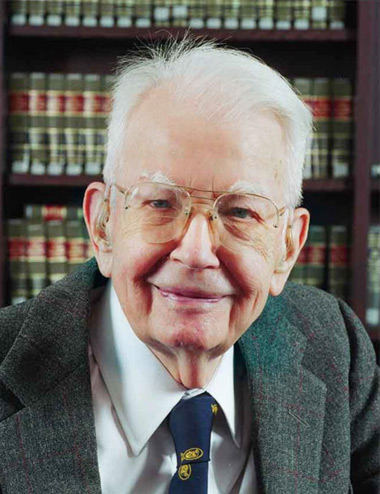 Ronald H. Coase (1910–2013) was the Clifton R. Musser Professor Emeritus of Economics at the University of Chicago Law School, and he served as the highly influential editor of the Journal of Law and Economics from 1964 to 1982. He received the Nobel Prize in Economic Sciences in 1991, for which Assar Lindbeck (chairman of the prize committee) stated that, “Coase explains the structure of a market economy. He tries to explain why we have firms, how companies evolve and the reason why they do or don’t expand. . . . The largest practical use for his studies is that people better can understand how the world works and why.”

Coase is best known for his pioneering work in law and economics, property rights, contracts, transaction costs, the nature of the firm, the problem of social cost, and the “Coase Conjecture” that durable-goods monopolists do not have market power because they are unable to commit to not lowering their prices in future periods. Coase’s two major studies are “The Nature of the Firm,” in which he introduced the term transaction costs, and illustrated their crucial importance, and “The Problem of Social Costs” (or Coase Theorem) in which he discussed property rights. His books include The Firm, the Market and the Law: Essays on Economics and Economists.

He was also a Sir Ernest Cassel Traveling Scholar, Rockefeller Fellow, Fellow at the Center for Advanced Study in the Behavioral Sciences at Stanford University, and Senior Research Fellow at the Hoover Institution, and in 2003 he was the winner of The Economist’s Innovation Award in the category of “No Boundaries.”

His famous article, “The Lighthouse in Economics” formed the inspiration for the logo of The Independent Institute.

And he is the subject of the following articles: