←  ABOUT US
About
›
Person Detail
Lech Wałęsa 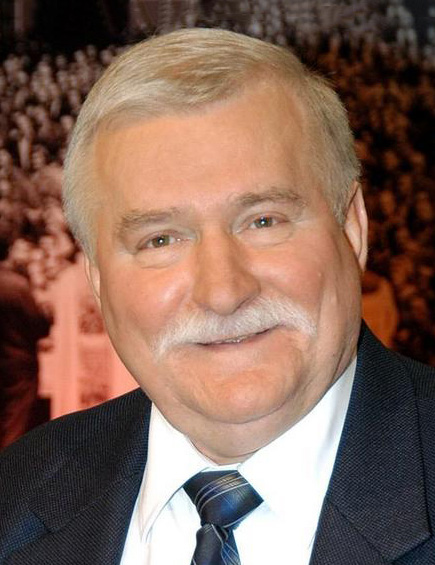 Lech Wałęsa, the first President of the Republic of Poland, is the world-renowned Nobel Peace Prize laureate and human rights activist. As the charismatic co-founder and leader of Solidarity (Solidarność) in Poland, Wałęsa led the popular movement to challenge the totalitarian grip of communism in Poland—ultimately sparking uprisings across eastern Europe that led to the collapse of the Soviet Union and transition of Poland to a free-market economy.

Wałęsa was born on September 29, 1943, in Popowo, Poland. He graduated at a vocational school, worked as an electro-mechanic, and served a two-year term being drafted into the Polish Army. As a twenty-four-year-old car mechanic he moved to Gdańsk where he found a job as an electrician in the Lenin Shipyards. When workers’ protests broke out in 1970, he became a member of the strike committee. The communist authorities put down the strike and heavy loss of life was involved by the violence leashed out by the government. In the following years, Wałęsa faced many challenges, including constant state surveillance, numerous arrests and dismissals form various jobs. In spite of all these difficulties he actively participated in creating Free Trade Unions that eventually were established in March 1978. Even during this period of opposition to the authority of the communist regime, he did not resort to counter violence or aggression.

On August 14, 1980, he launched a struggle against the authorities at the Gdańsk shipyard in Poland for the right to establish free unions of workers, guaranteeing the rights of workers to strike and assuring freedom of speech. To do this he climbed over the fence and entered the Gdańsk shipyard from where he had been dismissed for anti-communist activity. Wałęsa was always ready to listen to and understand the opponent’s point of views and give as much importance to one’s duty as one’s rights. He explained to his fellow members that if the government went wrong, the right way was to find a way out of the bad impasse and to see that the battle remained thoroughly non-violent.

Subsequent to the strike, Wałęsa became the leader of the nation-wide social movement of Solidarity that ultimately was responsible for bringing down the communist regime in Poland. In September 1981, he was elected Chairman of the Independent Self-Governing Trade Union Solidarity at its First Congress.

With the imposition of martial law by Prime Minister General Wojciech Jaruzelski on December 13, 1981, the government “suspended” Solidarity, arrested many of its leaders and imprisoned Wałęsa for 11 months. In November 1982 he was released and reinstated at the Gdańsk shipyards. Although kept under surveillance, he managed to maintain contact with Solidarity leaders in the underground. His activities attracted worldwide attention particularly because his struggle was a non-violent one. The aim was to appeal to higher natural-law values so that the regime officials could see light and improve their behavior. While martial law was lifted in July 1983, many of the government’s restrictions on personal freedoms were continued. In recognition of his ongoing struggle and the ideals that he came to symbolize Lech Wałęsa received the Nobel Peace Prize in October 1983.

In May and August 1986, he led workers’ protests in the shipyard and contributed prominently to accelerating of the process of political change. He became the Head of the Civic Committee of such political initiative espoused by the activists of the Polish opposition movement.

Later Wałęsa co-chaired the Round Table Negotiations in 1989 between the opposition and the communist government. This resulted in the outlawed Solidarity movement becoming legal again, and in parliamentary elections that, although limited, led to the establishment of a non-communist political system. In 1990 Wałęsa was elected first President of the Republic of Poland, and his commitment to the cause of liberty has continued after he concluded his term as President in establishing the Lech Wałęsa Institute. He and his wife Danuta have eight children.

The only Pole to have addressed a joint meeting of the U.S. Congress, Wałęsa has been named “Man of the Year” by Time, The Financial Times, and The Observer. On February 8, 2002, he represented Europe, carrying the Olympic flag at the opening ceremonies of the XIX Olympic Winter Games in Salt Lake City. Two years later, on May 10, 2004, Gdańsk International Airport was officially renamed Gdańsk Lech Wałęsa Airport and his signature was incorporated into the airport's logo. And he represented Poland at the funerals of both Ronald Reagan and Boris Yeltsin.

Wałęsa is the recipient of numerous awards including the European Human Rights Prize, Eisenhower Medallion, Liberty Medal, Premio Galileo, Grand Cross of Legion of Honour, National Order of the Southern Cross, Order of Merit of the Italian Republic 1st Class, International Democracy Award, Knight with the Collar of the Order of Pius IX, Presidential Medal of Freedom, Knight Grand Cross of the Most Honourable Order of the Bath and thirty honorary doctorates from universities around the world.