←  ABOUT US
About
›
Person Detail
Archbishop Desmond M. Tutu 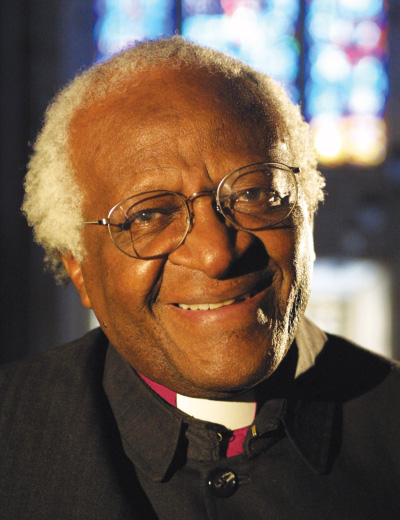 Desmond M. Tutu (1931–2021) was Archbishop Emeritus of Cape Town and former head of the Anglican Church in South Africa. He was born in Klerksdorp, in the South African state of Transvaal. The family moved to Johannesburg when he was 12, and he attended Johannesburg Bantu High School. Although he had planned to become a physician, his parents could not afford to send him to medical school. Tutu's father was a teacher, and he himself trained as a teacher at Pretoria Bantu Normal College and graduated from the University of South Africa in 1954.

The government of South Africa did not extend the rights of citizenship to black South Africans. The National Party had risen to power on the promise of instituting a system of apartheid—complete separation of the races. All South Africans were legally assigned to an official racial group; each race was restricted to separate living areas and separate public facilities. Only white South Africans were permitted to vote in national elections. Black South Africans were only represented in the local governments of remote "tribal homelands." Interracial marriage was forbidden, blacks were legally barred from certain jobs and prohibited from forming labor unions. Passports were required for travel within the country; critics of the system could be banned from speaking in public and subjected to house arrest.

When the government ordained a deliberately inferior system of education for black students, Desmond Tutu refused to cooperate. He could no longer work as a teacher, but he was determined to do something to improve the life of his disenfranchised people. On the advice of his bishop, he began to study for the Anglican priesthood. Tutu was ordained as a priest in the Anglican church in 1960. At the same time, the South African government began a program of forced relocation of black Africans and Asians from newly designated "white" areas. Millions were deported to the "homelands," and only permitted to return as "guest workers."

Desmond Tutu lived in England from 1962 to 1966, where he earned a master's degree in theology. He taught theology in South Africa for the next five years, and returned to England to serve as an assistant director of the World Council of Churches in London. In 1975 he became the first black African to serve as Dean of St. Mary's Cathedral in Johannesburg. From 1976 to 1978 he was Bishop of Lesotho. In 1978 he became the first black General Secretary of the South African Council of Churches.

This position gave Bishop Tutu a national platform to denounce the apartheid system as "evil and un-Christian." Tutu called for equal rights for all South Africans and a system of common education. He demanded the repeal of the oppressive passport laws, and an end to forced relocation. Tutu encouraged nonviolent resistance to the apartheid regime, and advocated an economic boycott of the country. The government revoked his passport to prevent him from traveling and speaking abroad, but his case soon drew the attention of the world. In the face of an international public outcry the government was forced to restore his passport.

In 1984, Desmond Tutu was awarded the Nobel Prize for Peace, “not only as a gesture of support to him and to the South African Council of Churches of which he is leader, but also to all individuals and groups in South Africa who, with their concern for human dignity, fraternity and democracy, incite the admiration of the world.”

Two years later, Desmond Tutu was elected Archbishop of Cape Town. He was the first black African to serve in this position, which placed him at the head of the Anglican Church in South Africa, as the Archbishop of Canterbury is spiritual leader of the Church of England. International economic pressure and internal dissent forced the South African government to reform. In 1990, Nelson Mandela was released after almost 27 years in prison. The following year the government began the repeal of racially discriminatory laws.

After the country’s first multi-racial elections in 1994, President Mandela appointed Archbishop Tutu as Chairman of the Truth and Reconciliation Commission, investigating the human rights violations of the previous 34 years. As always, the Archbishop counseled forgiveness and cooperation, rather than revenge for past injustice.

In his work, he has publicly denounced tyranny and terrorism in all its forms, including communism, terrorism, invasive wars around the world, suicide bombers and the mistreatment of innocent people anywhere, and he a champion of the universal application of the rule of law. In this regard, he has been especially vocal in his criticism of Zimbabwean President Robert Mugabe, calling on him to step down, and urging all African leaders to denounce him. He has also pled for free trade to the G8 leaders, and he has been a tireless campaigner in support of controlling TB and HIV, having also served as Honorary Chairman for the Global AIDS Alliance.

In 1996 he retired as Archbishop of Cape Town and was named Archbishop Emeritus, then served as Professor of Theology at Emory University. His books include Crying in the Wilderness, Hope and Suffering, and The Rainbow People of God.