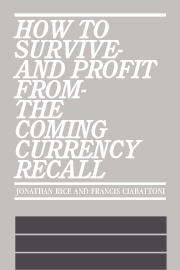 In March 1986 the U.S. Treasury announced a plan to replace our currency with new money. Although the Treasury claims its purpose is to prevent counterfeiting, such an explanation is highly suspect, since the cost of the currency exchange will far surpass the losses that occur through counterfeiting. It is important to note that plans are being considered for the new currency to have embedded elements that will allow the government to track and trace the movement of cash throughout the economy, whether above ground or underground.

The effects of any currency exchange would be far-reaching, affecting the wealth and wellbeing of every American. It would, for example, flush out the underground economy (which is estimated to represent up to 30 percent of the GNP). A call-in could also be used repudiate the national debt.

What effects will the new currency have on each individual? How should you protect your assets should be "hoarded" to position yourself strategically and what should be liquidated? Which investment strategies should be executed before the currency exchange occurs? These are some of the questions the authors answer about what will probably be the single most momentous economic event in our lifetime.