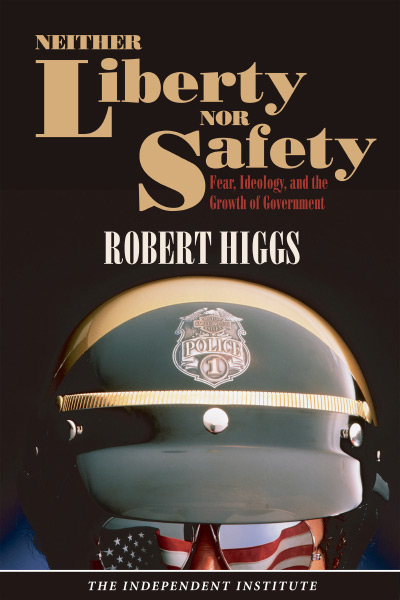 • Advocates of a larger government often use fear to make the public more receptive to their plans. Social scientists studying the growth of government usually neglect the role of fear, crisis, and ideological change. Also, they often rely on flawed statistics (e.g., government spending as a share of GDP) that fall far short of measuring the actual extent of government involvement in the economy and in people’s personal lives. (ch. 1-4)

• When scholars consider what pushed the United States into and out of the Great Depression, they usually restrict their analysis to the years 1929 to 1941 or so. This approach is very misleading. It gives inadequate weight to the economic policies implemented during World War I and the decade that followed, which set the stage for the onset of the Depression and help to explain why the government adopted policies that worsened it. It also assumes incorrectly that the U.S. civilian economy was prosperous during World War II. (ch. 5)

• Although the United States was on the winning side of World War I, World War II, and the Cold War, Americans ended up with fewer liberties than they had before the wars. “Every year, on Veterans Day, orators declare that our leaders have gone to war to preserve our freedoms and have done so with glorious success, but the truth is just the opposite,” writes Higgs. “In ways big and small, direct and indirect, crude and subtle, war—the quintessential government activity—has been the mother’s milk for the nourishment of a growing tyranny in this country, and it remains so today.” (ch. 6)

• Since the early 20th century, long-term structural changes, the enduring effects of great “national emergencies,” and collectivist- leaning ideological changes have promoted the formation of political interest groups, each seeking to use government power to promote its ends at the expense of the general public. Constitutional doctrines that had long restrained the growth of government have been abandoned. For the past century (and probably for decades to come) the U.S. case illustrates Jefferson’s dire dictum: “The natural progress of things is for liberty to yield and government to gain ground.” (ch. 7)

“Those who would give up essential Liberty, to purchase a little temporary Safety, deserve neither Liberty nor Safety,” wrote Benjamin Franklin. Attempting to gain security by sacrificing liberty is also a foolish action, some would add, because it only increases the potential for harm.

In Neither Liberty nor Safety: Fear, Ideology, and the Growth of Government, economist and historian Robert Higgs illustrates the false trade-off between freedom and security by showing how the U.S. government’s economic and military interventions reduced the civil and economic liberties, prosperity, and genuine security of Americans in the 20th century. Extending the theme of Higgs’s earlier books, Neither Liberty nor Safety stresses the role of misguided ideas in the expansion of government power at the expense of individual liberty. Higgs illuminates not only many underappreciated aspects of the Great Depression, the two world wars, and the postwar era, but also the government’s manipulation of public opinion and the role that ideologies play in influencing political outcomes and economic performance.

After a brief introduction, in which he explains the decades-long development of his research agenda, Higgs takes up a fundamental issue pertaining to freedom and security in chapter 1, “Fear: The Foundation of Every Government’s Power.” To achieve compliance with their edicts, governments ultimately rely on their police power—i.e., the legal power to summon, arrest, detain, fine, regulate, and tax. Exclusive reliance on force, however, is crude and costly. Hence, according to Higgs, governments have developed more efficient methods to ease their domination. In olden times, court priests promoted a theology of obedience. Nowadays, intellectuals and politicians mount scaremongering campaigns, exaggerate miscellaneous “crises,” and propose “solutions” that enhance government power at the expense of individual liberty.

Besides ignoring the role of fear in the growth and maintenance of government, many scholars have embraced gross oversimplifications that have misguided their research, Higgs argues in chapter 2, “Eighteen Problematic Propositions in the Analysis of the Growth of Government.” Economists, for example, sometimes use a single measure (e.g., government’s share of GDP) as a proxy for the size of government and explain changes in this proxy by relating it to a single, often amorphous, cause (e.g., “public demand”), which they assume influences outcomes in the same way at all times and places. Such approaches ignore not only hard-to-quantify causal factors, but also the institutional conditions that can alter the growth rate of government. Traditional historical research— asking who did what, when, why—is more revealing than exclusive reliance on statistics or mathematical modeling.

Higgs examines another overlooked piece of the puzzle in chapter 3, “The Complex Course of Ideological Change.” Given ideology’s influential role and ubiquity (virtually everyone has one), it is unfortunate that many social scientists have given it short shrift. An ideology, according to Higgs, helps people to economize in thinking about politicoeconomic causes and effects; provides a framework for evaluating whether actions and outcomes are good or bad; suggests a course of political action; and helps to shape one’s personal identity and group affiliations. Higgs explains how ideologies spread and critiques several theories of ideological change.

Although Higgs devoted much of his book Crisis and Leviathan (1987) to considerations of ideology, some reviewers accused him of arguing that crises had promoted the growth of government mechanically, regardless of people’s ideas and motives. Others thought he had claimed that the growth of government is always and everywhere the result of a crisis. Higgs dispels such misconceptions in chapter 4, “Crisis and Leviathan: Review and Response” (which also includes historian Burton Folsom’s review of the earlier book). Had the country’s opinion leaders not fallen under the sway of Progressivism, which espoused regulations to constrain big business, fostered cartels, and favored the centralization of government power, the 20th century’s challenges might have elicited policies with very different consequences for the growth of American government.

The Growth of Government

The rise of Progressivism and the decline of laissez-faire and small-government republicanism established the context for the pivotal events of 1914-29, which set the stage for both the Great Depression and the federal government’s counterproductive responses to it, Higgs explains in chapter 5, “What Got Us Into and Out of the Great Depression.” World War I destroyed the classical gold standard and led to the adoption of a monetary system that facilitated the unsustainable economic boom of the Roaring Twenties. In addition, wartime economic planning presaged the New Deal programs that prolonged the Depression.

“Because the government’s economic rescue program worked at cross-purposes or interfered with the successful operation of the private competitive economy, they exacerbated the downturn between 1929 and 1933, making it deeper than it otherwise would have been, and slowed the economy’s recovery after 1933, so that even when the government began to shift the economy onto a war footing in mid-1940, full recovery had not yet been attained,” writes Higgs. “In short, the government’s cures made the disease much worse and slowed the patient’s natural recovery.” Prosperity returned, not during World War II, but afterward, as massive amounts of labor and capital returned to civilian production and investors’ confidence in the security of their private-property rights was restored.

Although the United States became wealthier in the decades after the war, the political economy never returned to the old, limited-government pattern. The war had institutionalized a symbiotic relationship between the military, the arms industries, and Congress, which sucked a substantial amount of resources from taxpayers. More important, collectivism increasingly scored small victories over individualism in public life, Higgs argues in chapter 6, “The United States Won the World Wars, but Americans Lost.” The legislative and executive branches asserted authority to regulate more activities in the name of economic and military security. The Supreme Court, having approved the suppression of critics of World War I and refused to block the internment of more than 110,000 people of Japanese ancestry during World War II, was no longer a reliable friend of liberty.

“Perhaps even more consequential than the war’s constitutional legacies were its effects on the country’s dominant ideology,” writes Higgs. “As World War I had done, only more so, the Big One produced a prominent move toward acquiescence in and often affirmative demand for collectivism. Not only did the masses now look more expectantly to the federal government for salvation from life’s troubles, large and small, but the leadership of the business class also came finally to make a complete peace with the government it had long seen as a nuisance and a menace.”

Higgs documents many of the new roles the U.S. government assumed after the war in chapter 7, “Government and the Economy in the United States since World War II.” The Truman Doctrine, the Marshall Plan, and U.S. entry into NATO coincided with a greatly enlarged peacetime military budget and a new, leading role for the country in international affairs. Preparation for war occurred continuously, and crises erupted episodically, convincing many people that their interests were identical to those of the bipartisan national-security elite. The power of the congressional component of the military-industrial-congressional complex also increased, adding a new twist to political vote buying.

The welfare state also played the log-rolling game. “During the 1950s, 1960s, and 1970s,” Higgs writes, “members of Congress turned Social Security into a fabulous vote-buying scheme, repeatedly raising the amounts of existing benefits, expanding the types of benefits (for example, adding disability insurance in 1956), and easing the eligibility requirements for receiving benefits.” Higgs describes not only many social-welfare statutes, but also several kinds of business subsidies and restrictions that undergirded an elaborate, generous system of corporate welfare and regulatory protectionism— payoffs that further entrenched an ideology first associated with the Progressive movement.

The acceleration of transfer payments (including subsidies) is not confined to the United States, Higgs explains in chapter 8, “The Ongoing Growth of Government in the Economically Advanced Countries.” He maintains that some leading analysts have incorrectly argued that the growth of government in Europe and elsewhere has slowed or even stopped since the early 1980s, a mistake that arises from their focus on misleading measures such as government’s share of GDP or employment. Higgs then examines two distinct causal factors of government growth—structural trends and “trigger” events—as well as their interaction. Finally, he contrasts his ideas on the mixed economy with those of Ludwig von Mises and Sanford Ikeda, explaining why he believes the economically advanced countries will continue to oscillate between highly controlled and not-quite-so-highly controlled and are unlikely to adopt either laissez-faire or complete socialism during the next several decades.

Buy Neither Liberty nor Safety