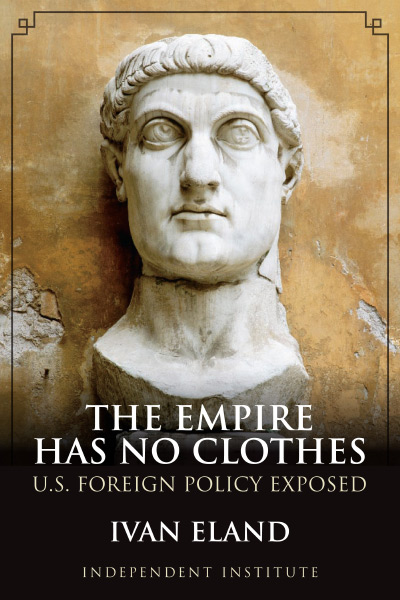 Most Americans don’t think of their government as an empire, but in fact the United States has been steadily expanding its control of overseas territories since the turn of the twentieth century. Nor do most Americans think that the global U.S. military presence threatens their security or economic interests or that it hinders the democratic aspirations of citizens of other countries; many Americans consider U.S. interventionism progressive or, at worst, benign.

Unfortunately, a great chasm lies between common perception and reality, according to defense policy expert Ivan Eland (senior fellow and director of the Independent Institute’s Center on Peace & Liberty). In The Empire Has No Clothes: U.S. Foreign Policy Exposed, Dr. Eland argues against both conservative and liberal proponents of American empire, methodically making the case that U.S. military interventionism harms the interests of Americans politically, economically, and militarily. His thesis—that the United States and probably the world would be more free, secure and prosperous if the U.S. government reduced its military involvement overseas, much as the nation’s founders had urged—is certain to garner intense interest from those who recognize the need for a thoroughgoing examination of U.S. foreign policy and national security policy.

The Origins and Nature of the U.S. Empire

Although U.S. imperial stirrings began with a colonial foray in the Spanish-American War of 1898 and in the Caribbean and Central America in the early 1900s, the global American empire did not explode onto the world scene until 1950, Eland explains. Only during the Cold War did America finally abandon its traditional foreign policy of acting as an offshore balancer of power in favor of Pax Americana—a worldwide network of alliances, forward-deployed military forces at bases scattered around the globe, and a policy of direct and indirect intervention in the affairs of many other nations. If the purpose of Pax Americana were simply to fight the spread of communism, it would have been dismantled after the demise of the Soviet Union. Instead, the American empire grew larger after the Cold War ended.

Unlike the Roman and British empires, the American empire for the most part is not one of territorial conquest (although the U.S. occupation of foreign territories is happening with increasing frequency). America’s empire is a subtler, more informal version along the lines of Ancient Sparta. The United States exerts more control over its allies’ foreign policy than over their domestic affairs, although it probably would not allow major allies to become authoritarian or totalitarian states. Furthermore, the empires of old gained resources and plunder, captive markets for their exports, and tax revenue from their territories. The United States gets none of those things from its allies and client states. (U.S. allies even refuse to fully open their markets to U.S. exports and investment.) Instead, it gets a bill—in blood and treasure—for the defense of nations that are now rich enough to defend themselves.

Why Conservatives Should Be Against Empire

Eland argues that the concept of empire is contrary to the principles of both liberals and conservatives. Conservatives should oppose an American empire, because war is the primary cause of Big Government—including the growth of nondefense spending—which in turn requires increased taxes. Hostile relations with other nations also breed protectionism and controls on financial flows, thus undermining the principles of free trade. Bloated government, high taxes, and restricted international commerce slow economic growth, undermining the prosperity and well-being of American society. Over time, lower U.S. economic growth rates could cause the United States to fall into relative decline, as happed to the overextended, overtaxed British Empire in the last century.

Conservatives worry about the nation’s security, but the United States does not need an empire to ensure it; America has two great oceans as moats, weak and friendly neighbors, and the most potent nuclear arsenal on the planet.

Why Liberals Should Be Against Empire

Liberals should oppose an empire, Eland argues, because many of the so-called “humanitarian” military interventions of the United States often have unhumanitarian consequences. The abysmal track record of attempts to bring democracy and free markets to countries coercively shows that such interventions usually fail to restructure fractured and violent societies. In the long term, violations of nations’ sovereignties—even for “humanitarian” ends—undermine international norms against cross-border aggression and encourage separatist groups to revolt. Over time, therefore, more people are likely to be killed than saved by U.S. interventions into failed states. Instead of placing the lives of U.S. soldiers between two opposing sides not yet ready to make peace, the international community should focus on helping nations in which all parties to a conflict are exhausted by war and are ready to stop fighting.

Why All Americans Should Be Against Empire

Perhaps the most compelling reason for all Americans to oppose a U.S. empire, according to Eland, is that the empire is destroying the republic. An imperial foreign policy has led to an imperial presidency that is much more powerful than the founders intended. In recent years, the overextended American empire has threatened the American homeland and the civil liberties of Americans—both through “blowback” (the dangerous backlash against prior policies) and the enormous expansion of domestic federal power, including broader police surveillance and detention powers.

As much as some would like to use U.S. military power to restructure failed states, this is likely to be an unsuccessful and dangerous undertaking. Bitter civil wars—ethnic and otherwise—breed terrorism. The United States is hated worldwide for its interference in the affairs of other nations and peoples, and the attacks on September 11 were only the most obvious instances of blowback from U.S. foreign policy. Because intelligence is imperfect and America—the largest truly open society in the world—is very vulnerable to terrorism, improved homeland security can go only so far in protecting Americans from future catastrophic terrorist attacks. A better solution is to whiteout the bull’s-eye painted on America by dismantling its empire and scrapping its interventionist foreign policy.

With the demise of America’s chief rival, the Soviet Union, the benefits of Pax Americana and profligate military interventions worldwide have declined dramatically. With the advent of catastrophic terrorism, the costs of such an activist foreign policy have increased precipitously. Thus, the quest for empire is a foreign policy but not a security policy.

The republic’s founders realized that America’s geographical remoteness vis-à-vis other nation-states allowed the luxury of distancing itself from entangling alliances and foreign quarrels, defining its vital interests narrowly, and adopting a policy of military restraint. In an age of catastrophic terrorism, the founders’ original foreign policy is more relevant than ever. Profligate intervention overseas is not needed for security against other nation-states and only leads to blowback from the one threat that is difficult to deter—terrorism. In short, the U.S. empire lessens American prosperity, power, security and moral standing. It also erodes the founding principles of the American Constitution.

Americans have ignored the economic, political and security costs of the burgeoning empire at great peril. As Eland writes in the book’s introduction, “The fuzzy criteria that the U.S. government uses to determine whether American forces should intervene indicate that the American foreign policy is askew. Unlike the empires of old, which limited their military interventions to certain parts of the world, the United States is trying to police the entire globe. This book offers an alternative vision of a more restrained U.S. foreign policy that is more focused, more achievable, less costly, and a lot less dangerous.”

Public debate about the U.S. role in the world has finally begun in earnest, and The Empire Has No Clothes delivers a penetrating argument to that debate, exposing the imperial motives behind an interventionist foreign policy, questioning the historical assumptions on which it is based, and advocating a return to the founders’ vision of military restraint overseas.

IVAN ELAND is recognized as one of the leading experts in U.S. defense and foreign policy. He is Senior Fellow and Director of the Center on Peace & Liberty at The Independent Institute.

He received his M.B.A. in applied economics and Ph.D. in national security policy from George Washington University. He has been Director of Defense Policy Studies at the Cato Institute, Principal Defense Analyst at the Congressional Budget Office, and Investigator for the House Foreign Affairs Committee.

Eland is the author of Putting “Defense” Back into U.S. Defense Policy and The Efficacy of Economic Sanctions as a Foreign Policy Tool, a contributor to numerous volumes, and the author of forty-five in-depth studies on national security issues. His articles have appeared in Arms Control Today, Bulletin of the Atomic Scientists, Mediterranean Quarterly, and Middle East and International Review, and his popular writings have appeared in such publications as the Los Angeles Times, USA Today, Philadelphia Inquirer, Washington Post, Newsday, Chicago Sun-Times, and Defense News. He has appeared on ABC, NPR, PBS, Fox News, CNBC, CNN, C-SPAN, MSNBC, Radio Free Europe, and BBC.

Buy The Empire Has No Clothes (First Edition)