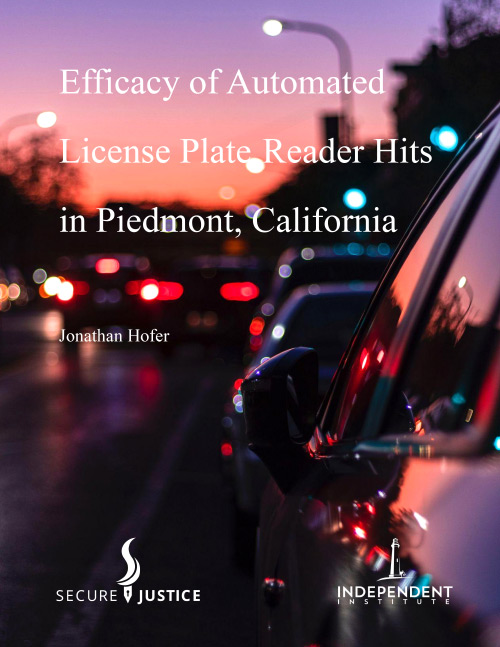 This new Independent Institute report finds that automated license-plate readers (ALPRs) fail to justify their part in municipal mass surveillance. These cameras violate the liberties of the innocent and fail to catch the criminals—and they are seriously expensive. It’s a lose/lose/lose situation America’s cities don’t need now—or ever.

In recent years, American cities have increasingly adopted license-plate readers (ALPRs) for use by local police. The cameras are supposed to help deter vehicle theft, assist police in recovering stolen cars, and assist law enforcement in tracking down important investigative leads, such as locating a witness or identifying a suspect. But they have done nothing of the kind, as this groundbreaking report, co-published with another nonprofit, Secure Justice, reveals.

And these failures were expensive. The city of Piedmont spent $576,378.80 of tax-payer money for more crime and less individual liberty. There is good news, however. Thanks to this report, no other cities in America need to make these mistakes.

Jonathan Hofer is a Research Associate at the Independent Institute.

RELATED
Race Everywhere
Ownership, Control, and Reform: Market-Based Approaches to Universities
The Cost of San Francisco’s Reparations Proposal: Nearly $600,000 Per Household
What the Populists in Congress Get Right and Get Wrong
Texas Conservatives Should Not Support Banning Land Sales to Foreigners