The Second Amendment Was Adopted to Protect Liberty, Not Slavery: Independent Institute 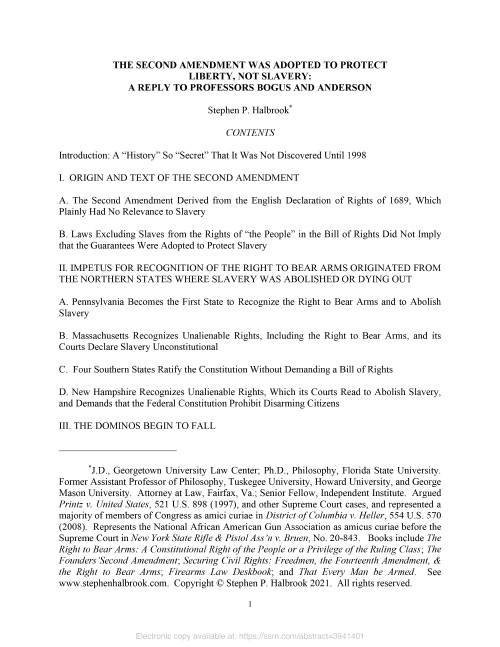 Was the Second Amendment right of the people to bear arms adopted to protect liberty or to perpetrate slavery? The latter was the thesis first published by Professor Carl Bogus in a 1998 law review article “The Hidden History of the Second Amendment.” His basic argument is that the Amendment was adopted so that the Southern states could maintain militias to suppress slave rebellions. New life was given to the thesis by Professor Carol Anderson in her 2021 book The Second, which asserts that the Amendment was “not some hallowed ground but rather a bribe, paid again with Black bodies.”

As Bogus concedes, no direct evidence supports the thesis. Instead, historical fact refutes it. The predecessor of the Amendment was the English Declaration of Rights of 1689, which protected the right of Protestants to have arms. England had no domestic slave population. Beginning in 1776, some states adopted bills of rights that recognized the right to bear arms. Three of them were Northern states that abolished slavery. When the federal Constitution was proposed in 1787, it was criticized for lack of a bill of rights. Demands for recognition of the right to bear arms emanated from antifederalists, including abolitionists, in the Northern states, while several Southern states ratified without demanding amendments at all.

New Hampshire, whose bill of rights was read to abolish slavery, was the first state to ratify the Constitution and demand a prohibition on the disarming of citizens. The Virginia ratifying convention followed. While some supported an amendment that the states could maintain militias if Congress neglected the same, support for the militia was largely tied to rejection of a standing army, not maintenance of slavery. The right to bear arms was proposed in a declaration of rights that had nothing to do with slavery. New York ratified next, also proposing recognition of the arms right.

James Madison introduced what became the Second Amendment in the first federal Congress, and it worked its way through both Houses without any hint of concern for the interests of slavery. Congress rejected the separate structural amendments that included a proposal for more state powers over the militia.

Contrary to Bogus, no secret conspiracy was afoot to make “the right of the people” to bear arms an instrument of slavery. Instead, the abolitionists, and then the framers of the Fourteenth Amendment, would use those words to show that “the people” meant just that. African Americans were people and were thus entitled to all of the rights of Americans. The failure at the Founding was not that the rights of citizens were accorded to whites, but that these rights were not accorded to all persons without regard to race. By its very terms, the Second is a bulwark for the protection of the fundamental rights of all of the people.

RELATED
Hulu’s 1619 Project Docuseries Peddles False History
Concentrate Where the Murders Are Concentrated
Reckless Reparations Reckoning
‘Belief in Freedom’ Is Bad for You
Sins Against Children: On America’s moral compass in the face of Covid.
10 Steps to Save America: Yes, there is a way. But is there the will?
Analogical Reasoning and the Second Amendment
Should Courts Appoint Historians as Experts in Second Amendment Cases?

Securing Civil Rights (2021)
Freedmen, the Fourteenth Amendment, and the Right to Bear Arms

Securing Civil Rights (2010)
Freedmen, the Fourteenth Amendment, and the Right to Bear Arms