What Is a Year of Life Worth? Part II: News: The Independent Institute

In making decisions about medical care everyone should factor in cost—patients, doctors health insurance companies and government. Consider two alternative procedures, A and B. If for each $1,000 spent on procedure A, patients gain one extra month of life whereas using procedure B costs $2,000 for the same gain, A should be preferred to B. By making the efficient choice we free up money to meet other health and non-health needs.

There remains this problem, however: what if the person who makes the decision about cost is different from the person who realizes the gain. That is what gives rise to charges of “rationing” and “death panels.”

Other countries routinely use cost-effectiveness data to make decisions about health coverage. In Britain, the National Institute for Health and Care Excellence, a government agency that gives guidance about which services the National Health Service should cover, has a threshold of 20,000 to 30,000 pounds per QALY (about $31,000 to $47,000). They don’t make decisions on whether to cover therapies based on this number alone, but it is certainly considered a factor.

Where a QALY is a quality-adjusted year of life. And since government health care budgets are strained everywhere in the world, you can be sure that the cost effectiveness criteria is “considered” a lot.

According to a 2002 World Health Organization report, 25,000 cancer patients die prematurely in Britain each year—often because of lack of access to drugs generally available in the United States and Europe. (See also this 2013 NHS estimate on all causes of premature deaths.)

To use an example closer to home, in 1994 Hillary Clinton decided that as part of her own health reform, health plans would provide free mammograms only to women 50 and older—and only at two-year intervals. In contrast, the National Cancer Institute and the American Cancer Society at the time were recommending mammograms for women after 40, either annually or every other year, and yearly mammograms after 50. Similarly she hinted that she would relax the usual recommendation of a Pap smear every year for sexually active young women. (Canada, at the time, offered the test every three years.)

While these decisions were being made, a review of the literature by Tammy Tengs and her colleagues showed that:

In essence, Clinton decided that the lower number was an acceptable use of money while the higher figure was not. The review of the literature on Pap smears showed that:

Clearly, Clinton and her advisors thought $1.5 million was way too high.

These decisions are said to have turned the general public against Hillary Care and doomed the Clinton health reform effort. But we shouldn’t take the wrong lesson away from that experience.

Hillary Clinton was not wrong about the cut off choices she made. She was wrong in thinking that the White House should make this decision for all the women of America. The tests involved are relatively inexpensive. They can easily be paid for from a Health Savings Account. If not getting a test is keeping someone awake at night, then by all means she should be encouraged to spend the money and get the test.

Here are some public policy principles to guide us going forward:

In case you missed it, Chris Conover has applied cost effective analysis to the entire Obamacare program, based on results from Massachusetts. He writes:

“.... even under the most wildly optimistic assumptions possible, Obamacare costs a jaw-dropping $224,000 per QALY. In the worst case, the costs would be as high as $1.3 million per QALY.” 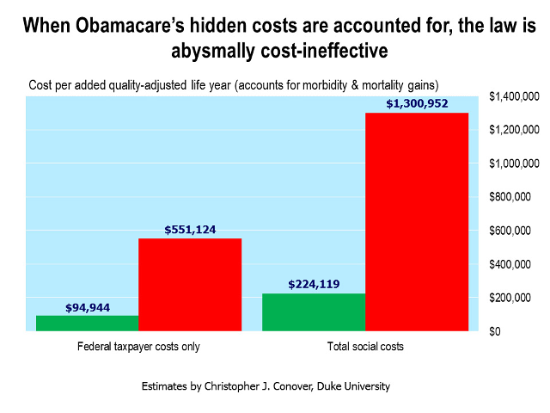 RELATED
Why Doesn’t This Economist Want His Daughter to Be a Feminist?
Why Do Progressives Support Democrats? Part One
Diabetic Complications and Economic Fundamentals
Vote Like a Woman: When You Vote, Remember Who Has Recently Most Hurt Women
No on Prop. 31: Big Police Can Be Worse than Big Tobacco
The Tentacles of the Social Media Octopus
Health Reforms Both Parties Should Endorse
Medicare Prescription Drugs: A Case Study in Government Failure
Prohibition Is A Bad Way to Deal with Flavored Tobacco
What the U.S. Supreme Court Bruen Decision Will Mean for America
Better Solutions for Rx Problems
Here’s What’s Wrong With BBB Lite