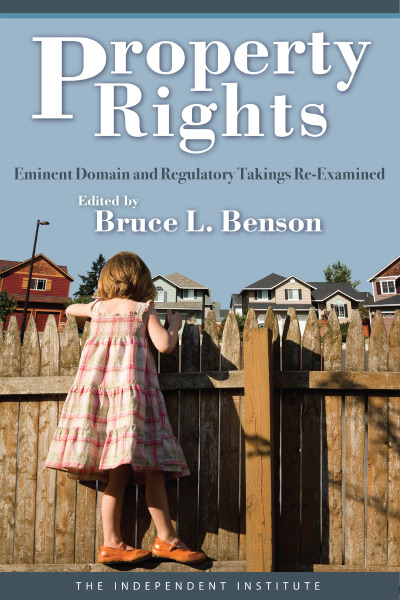 The U.S. Supreme Court decision in Kelo v. City of New London has become a dramatic focal point for the abuse of eminent domain by the government, and has resulted in a widespread backlash. State legislatures all over the country have responded to the backlash by considering, and often attempting to impose, new constraints on the ability of local governments to take property from one private party and transfer it to another. Property Rights now provides an in-depth and critical examination of the uses and abuses of eminent domain and regulatory takings.

Property Rights explores the uses and abuses of eminent domain and regulatory takings in four areas: proposed constraints on the use of eminent domain, compensation issues in theory and practice, eminent domain from a public choice perspective, and the spillover costs of takings. This comprehensive book brings together an outstanding group of scholars and experts, including the attorney who represented Susette Kelo before the U.S. Supreme Court, the legal scholar who wrote Regulatory Takings, and experts on land value determination, land-use policy, environmental regulation, regulatory policy, entrepreneurial activities, and economic behavior.

4. Compensation for Taking When Both Equity and Efficiency Matter
Paul Niemann and Perry Shapiro

5. How Fair Is Market Value? An Appraiser’s Report of Temptations, Deficiencies, and Distortions in the Condemnation Process
Wallace Kaufman

6. The Inadequacy of the Planning Process for Protecting Property Owners from the Abuse of Eminent Domain for Private Development
Scott G. Bullock

7. The Limits of Backlash: Assessing the Political Response to Kelo
Ilya Somin

8. Eminent Domain for Private Use: Is It Justified by Market Failure or an Example of Government Failure?
Bruce L. Benson and Matthew Brown

11. Markets versus Takings and Regulation: Deciding the Future of the Past
Matthew Brown and Richard L. Stroup

“The Supreme Court’s controversial decision in Kelo v. New London has produced not only a backlash against eminent domain abuse, but now, with the path-breaking book, Property Rights, a serious scholarly challenge to the premises underlying even non-abusive claims for eminent domain. Some of the best scholars and litigators in the field are assembled here to give their very insightful re-assessment of, and challenge to, the ‘despotic power’ of eminent domain.”
—John C. Eastman, Donald P. Kennedy Chair in Law and former Dean, Chapman University School of Law

“Professional and lay readers alike can profit from the different perspectives contained in this comprehensive and thoughtful book edited by the energetic Bruce Benson.”
—Richard A. Epstein, Laurence A. Tisch Professor of Law, New York University; author of Takings: Private Property and the Power of Eminent Domain

“Property Rights makes a valuable contribution to the public debate that has swept the country in the wake of the Supreme Court’s widely criticized decision in Kelo v. City of New London, and contributes to the understanding of the competing contentions of those who respectively favor and oppose the use and misuse of eminent domain.”
—Gideon Kanner, Professor Emeritus of Law, Loyola Marymount University

To Serve and Protect