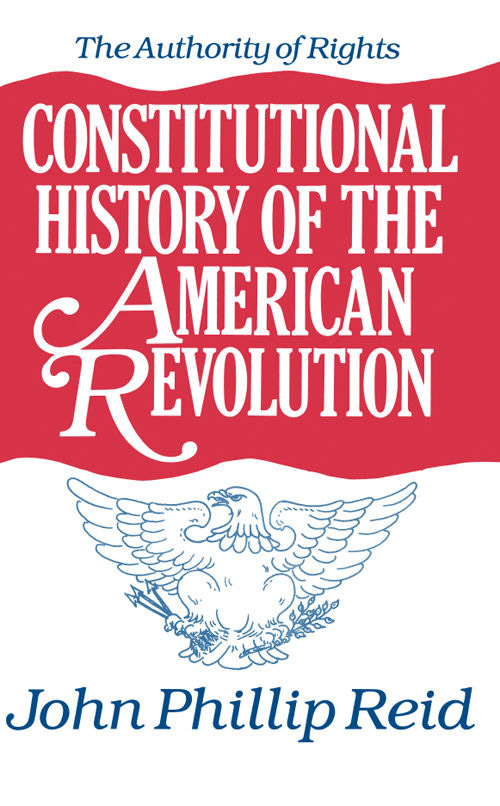 This abridged version of John Phillip Reid’s monumental four-volume history of the American Revolution is a welcome addition to the texts on that event in particular and the development of early American constitutionalism in general. Reid, a professor of law at New York University and one of the country’s most distinguished legal historians, has devoted more than a decade to rewriting the constitutional history of the Revolution. The first of these volumes, The Authority of Rights, appeared in 1986, followed by The Authority to Tax (1987), The Authority to Legislate (1991), and finally The Authority of Law (1993). In each instance, Reid challenged the received historiographical wisdom on the coming and consequences of the Revolution. The current volume ties his arguments into one neat package, giving the general reader a lively overview of this important subject.

Reid’s position, while nuanced, is clear. He begins by critically assessing the existing scholarship, taking special aim at what he calls the “ideological school” of historiography, associated primarily with the writing of Joyce Appleby and Jack P. Greene. These new ideological historians de-emphasized the importance of studying individuals and the ideas that they articulated and, instead, insisted on highlighting the way societies constructed reality through shared discourses. Borrowing from social psychology, the new cultural history, and critical literary theory, with its emphasis on deconstruction of texts, these scholars concentrated on the assumptions, traditions, conventions, values, and habits of thought that underlay the Revolutionary movement. This approach, however, placed little value on constitutional documents and legal authority per se; instead, it treated them as one part, and a small part at that, of the larger structure of ideas at work in the world of the Revolutionaries. Law and constitutionalism in the hands of the new ideological historians not only shrank in importance, but were also represented as having minor significance in the thinking and actions of educated Revolutionary leaders. Most important, the ideological historians tended to equate constitutionalism with the fungible concepts of politics rather than recognize it as a principled expression of deep-seated belief in the law. The law, these scholars claimed, had largely failed as a guide in the midst of the Revolution’s constitutional crisis. The apparent attachment of Americans to law and legal discourse was more a way for them to work out their concerns with what they believed to be a grand conspiracy by the crown to steal their liberty than an argument about the limits of their own authority to rebel.

Finally, the ideological school, in attempting to occupy the middle ground between constitutional history as it had traditionally been practiced and the new cultural history, ended up swallowing whole the concept of “republicanism.” Few phrases, Reid wisely notes, have come to explain so much yet mean so little in analytical terms. Republicanism generally had civic virtue as its chief goal. According to this rubric, persons agreed to bury their self-interest in the greater good of the commonwealth. As Reid argues, however, there was hardly one definition of republicanism at the time of the Revolution, either in the colonies or in England. The term became something of an intellectual catchall that expanded as more scholars tried to pour meaning into it only to have it become increasingly vague, even elusive. By explaining everything, republicanism ceased to explain anything.

The point of Reid’s scholarship has been to read the law and constitutionalism back into the story of the American Revolution. His argument, however, is not that “law alone explains the coming of the American Revolution, or even that all the ideology shaping the pre-revolutionary controversy was constitutional” (p. xv). Instead, Reid insists that to the extent that the causes of the Revolution were ideological, they were arguments about constitutionalism, which occupied the core of eighteenth-century thinking about government. Far from being antagonistic, the approaches of the ideological school and of Reid’s concerns with constitutional thought and development are reciprocal and reinforcing. Reid, for example, stresses the importance of constitutional values to debates at the local level, showing that such concerns were not the exclusive province of major political leaders, such as Madison and Hamilton. Moreover, Reid finds that Americans and the inhabitants of Great Britain were animated by a common desire: to live under a rule of law. In this sense, the Americans were not rebelling but instead attempting to restore an understood relationship between government and the governed in which the former owed a duty to the latter based on law. It was, in fact, the arbitrary actions of the English Parliament that stirred resentment and prompted the colonists to demand that they be treated like what they thought they wereEnglishmen.

Reid argues that the Revolution concerned not just Parliament’s ability to impose internal taxes on the colonies, but Parliament’s ability to impose any laws on the colonists. According to Reid, the empire faced a dichotomy of two constitutions. On the one side of the Atlantic the British envisioned Parliament as the sovereign source of all civil rights, whereas on the other side the Americans clung to the concept of a sovereign limited by the fundamental rights of citizens. American constitutional theory, therefore, was a reaction to Parliament’s efforts to prevent the resurgence of monarchical power. In this struggle, the colonists aligned themselves with the Crown, which they viewed as a check against arbitrary legislative action.

This view also adds a dimension to our understanding of the role of economic considerations in the Revolutionary generation. The so-called Progressive historians, such as Charles Beard, acknowledged that the Revolution represented a constitutional crisis involving both home rule and who should rule at home. These historians stressed the essential hypocrisy of the American leaders; that is, behind the mask of constitutionalism lurked greed and avaricious economic self-interest. Yet Reid brilliantly argues that even the most militant colonial advocates of the Revolution were willing to have trade regulated by the Parliament so long as it was done under a rule of law that applied with equal force throughout the empire. The English Constitution was in crisis, in that regard, because the monarchy could no longer play the central role of restraining Parliament from arbitrarily disrupting the rights of British citizens.

The most important contribution of Reid’s work is its emphasis on the concept of the rule of law. The Revolutionary generation invoked legal language to animate the concept of republicanism and give operational meaning to the idea of civic virtue. No one, according to Reid, could be virtuous without embracing the concept that law prevailed over persons and that its commands were necessary to realize the ambitious goals of republican political theory. One of the chief arguments to emerge from this emphasis on the rule of law was an insistence that the judiciary, through the doctrine of judicial review, had a critical role to play in limiting legislative power. The ability of judges to review legislative acts on independent constitutional grounds gave expression to both the rule of law and the concept of constitutionalism. Where the English had insisted on the power of Parliament to determine what was constitutional, Americans ultimately resorted, when the monarchy was no longer able to do so, to the judiciary as the final interpreter of what was constitutional. That development, Reid argues, was a singular contribution of the Revolutionary era, one not sufficiently appreciated by the ideological school. As Reid concludes, when viewed in this way, “[r]epublicanism is, in large part, constitutionalism recycled under another label” (p. xvi).

This abridged version of Reid’s scholarship has the enormous advantage of accessibility. It stands out as perhaps the most convincing exposition of the idea that law counted in the American Revolution, that constitutional values were central to action as well as thought, and that the outcome of the Revolution sent Americans moving in a direction far different from that of their English counterparts. Consequently, Reid concludes, the Revolution is best understood as a major turning point in thinking about the relationship of the government to the governed. Ironically, such an approach reaffirms the insights of the now much maligned nationalist historians of the Revolution. They too stressed that the Revolution was a profoundly constitutional event, in which the chief result was to tame the whim of legislative authority. Reid is smart enough to realize that such interpretation, based on a simple dichotomy between patriots in search of liberty and imperialists bent on tyranny, does not suffice, but he also acknowledges what the new ideological school is prone to forget: that concepts of liberty, freedom, and justice counted for a great deal among the Revolutionary generation.

Reid, of course, has suffered many critics, especially scholars who insist on a different way of understanding what constitutes ideology and who also claim that Reid gives too much credence to the formal aspects of law, lawyering, and judging. Although such complaints surely remind us to broadly examine Revolutionary-era ideology and interests, they significantly undervalue the Revolutionary generation’s concerns about how to break the law while remaining legal.