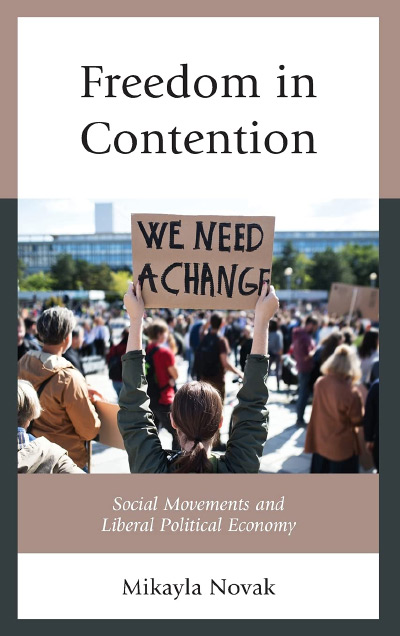 Freedom in Contention
Social Movements and Liberal Political Economy
By Mikayla Novak
Kindle Hardcover
This book review is a web exclusive for the Winter 2021/22 issue of The Independent Review.

Social movements, as Mikayla Novak writes in the last and concluding chapter of her Freedom in Contention: Social Movements and Liberal Political Economy, “are nothing new, and, indeed have posed as a critical feature of our societal landscapes for many years, if not decades and centuries” (p. 191). Yet, she claims, a “renewed growth in movement activities...calls for the need to better understand these phenomena” (p. 191; italics added). This is what Novak intends to do in her book. The goal is all the more ambitious that she wants to understand “social movements through the prism of liberal political economy” (p. 11) as well as “through the perspectives of...liberalism...as a moral, political, and philosophical framework” (p. 191). Here, liberal political economy is not, by contrast with what Novak says, “simply . . . political economy with liberal characteristics” (p. 11). Novak uses a specific version, which combines the insights “drawn from the Austrian (with Hayek as figurehead), Bloomington (Ostroms), and Virginia (Buchanan) traditions” (p. 13).

Ambitious indeed, as social movements easily appear incompatible with liberalism. For one thing, liberal political economy explains economic and social phenomena as individual, emerging or spontaneous and self-regulating, the product of human (cooperative) actions rather than of human design while social movements are “group-oriented phenomena” (p. 193), reputed for being “intentional, proactive and even, insistent, collective agents for changes in society” (p. 166). Thus, Novak writes, social movements “pose a challenge to liberal modes of explanation” (p. 189). And in terms of values too: what has liberalism, a philosophy that promotes individual freedom and democracy but also order and stability, in common with movements that “are seen to be prone to advance their goals in a disruptive fashion” (p. 166), that do not hesitate to use violence and that are even “believed to undermine democratic political procedures and systems” (p. 166)? The contrast is so sharp that answering the question seems useless. And Novak’s project seems doomed to fail, as she tries to reconcile the irreconcilable.

Yet, the book is anything but a failure. Whether the explanations of social movements provided here are better than those that already exist is hard to tell. What is certain is that the analyses are precise, extremely well documented, and persuasive. Indeed, with its 200 pages and 8 chapters extremely well written and very pleasant to read, the book convincingly demonstrates that social movements are perfectly compatible with liberalism and with liberal political economy. One could even say that Novak shows that social movements are profoundly and genuinely liberal phenomena.

If one starts with liberal values, Novak provides evidence that shows how social movements actually have “contributed to freedom in various guises” (p. 113)—economic, political and social freedom—, how they have promoted actions “in favor of human betterment” (p. 49) which is also part of a liberal ethos, and how they have been “involved in the struggle to garner respect, and amplify participation and voice, for the oppressed, and even have had their hand in political democratization and the downfall of unaccountable, even despotic rule” (p. 139). There are “numerous examples” of social movements that have contributed “toward regressive sliding toward illiberalism on several fronts” (p. 193). However, “it is also possible to fashion a social movement history of liberalism in which certain movements have meaningfully contributed to human liberty (p. 193). In her book, Novak carefully notes that many social movements are disreputable from a liberal perspective, since their participants aim at promulgating illiberal projects. Her point is not that all movements are pro-liberty and pro-democracy. She rather claims that without the actions of the pro-liberal movements, our societies would not be as liberal, as democratic, and as just as they are. Social movements are not only part of the history of liberalism, they were instrumental in promoting liberalism—“social movements are important . . . participants within critical episodes of liberal history” (p. 139). This means, and this is particularly important, that social movements have played this liberalizing role for decades and centuries, and can still play this role since we live in a period in which “illiberalism appears, again, on the rise” (p. 163). As Novak notes, “liberty is a struggle” and social movements have a part to play in it.

Almost perfect, one could unfairly add about an altogether excellent book. Indeed, one may wonder if James Buchanan fits in the picture. The 1986 Nobel Prize laureate is presented as a leading figure of the Virginia School of Political Economy, which he was. Yet he is relatively less present in the book than the Austrians (Hayek, in particular) or the Ostroms. Now, Buchanan believed, like Elinor Ostrom, in individuals’ willingness and capacity to cooperate—at least under certain institutional conditions. He was thus as convinced as Ostrom that individuals solve the collective action problems and social dilemmas they face. From this perspective, his work could also be used to explain social movements, and Novak could also have used it in her reasoning. But Buchanan also believed that rules were required to guarantee the proper functioning of the social game. Such rules could not be, in his view, changed while the game was played and could only be changed with the unanimous consent of the people affected by the change. By contrast, there are also rules used within the game that could be and are changed all the time. So the question would be, from Buchanan’s perspective, to know whether or not social movements contribute to change the rules of the game or the rules used within the game. Obviously, the answer is: it depends. Some social movements are consistent with Buchanan’s frame of analysis. Others are not. A chapter discussing social movements in those terms would certainly have been a nice addition to Novak’s book. A book that is nonetheless already very complete and, as it is, useful and important.