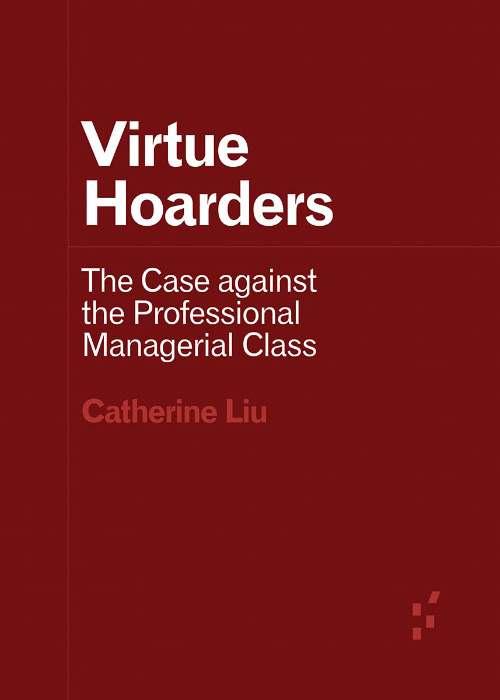 Virtue Hoarders
The Case against the Professional Managerial Class
By Catherine Liu
Kindle Paperback
This book review is a web exclusive for the Summer 2021 issue of The Independent Review.

Catherine Liu is a bona fide “liberal.” She’s opposed to cronyism, intolerance, and hypocrisy. She values free speech and robust inquiry. She’s passionate about the working poor and the middle class. All of this means that she can’t stand Democrat leadership and “the elites” on the Left. There are so few liberals (and conservatives) these days. We need many more people like her—principled, persuasive, aggressive, and willing to call out others in their camps.

Unfortunately, Liu is a “Socialist”—hard-core by her own description. But who knows what that means? She’s also a Bernie fan and he’s not much of a Socialist anymore—in the textbook sense of government owning the means of production. She also confuses “capitalism” with “crony capitalism" and its “rent-seeking” (p. 4). Then again, Liu is a professor of “film and media studies,” so one might not expect her to know too much about economics.

Still, Liu’s comments in Virtue Hoarders on politics seem spot-on. Her chief target is the “PMC”—the “professional managerial class.” As an academic, she is in the PMC but is disturbed by its norms. White-collar, upper-class in terms of education and income, and often ideologically on the Left, she describes the PMC as engaged in class warfare against the lower classes.

Worse yet, the PMC sees itself as vastly superior to “powerless” people who they ignore—or objectify as they try to save them from various sins and pitfalls. The PMC defines virtues and then attempts to “hoard” them through “virtue signaling.” Its members create “moral panics” over violations of these virtues. They turn politics and policy battles into “individual passion plays” (p. 2).

The approach is deeply disunifying and destructive. The PMC condescends against “deplorables” and attacks those who disagree. As Geoff Shullenberger expresses it in his review: “The politics of virtue-hoarding is anti-universalist. Rather than pursue shared public goods, its function is to fortify the class’s dominant position by morally distinguishing it from the underclass” (“The Dictatorship of Virtue,” Washington Examiner, January 26, 2021:48–49). This pursuit of power and privilege—by already-powerful and privileged people—is profoundly offensive to Liu as a Marxist.

Liu is upset at their methods, but there is a practical problem as well: a political backlash from blue-collars and other common folk. “Ordinary people without college degrees have rejected PMC technocracy in favor of populist authoritarianism because they no longer believe” (p. 74). They don’t trust that “the elites” have their best interests in mind and otherwise find them somewhere between annoying, blind, and despicable.

This explains much of the recent popularity of Donald Trump and Bernie Sanders. Certainly, the GOP is looking to capitalize on disdain for the elites. To Liu, the Republican reaction is “pure media theater” (p. 4). While the GOP is an anticipated obstacle, she has much higher hopes for the Democrats. Unfortunately, such expectations are a fool’s errand these days. Democrat politicians aren’t liberal (on military interventionism, civil liberties, or the working class) any more than Republicans are conservative on fiscal matters.

Liu is particularly upset at the PMC’s elevation of race over class through “identity politics,” since she sees class as the dominant lens to understand the world. She discusses “The 1619 Project” as a key example in this regard. Addressing race to some extent is not problematic. But elevating it over class is not in line with reality or, thus, ultimately helpful.

Sociologically, elevating class over race is a common mistake. Race matters, but class matters more. Consider this thought experiment: Is it easier for you to talk with someone of a different race but the same class—or someone of the same race but a very different class? For me and most people I ask, the latter is much more difficult.

Class also matters much more in policy terms. Race and culture can connect to preferences and behaviors. But class-based differences routinely emerge, especially with means-tested policies. To note, Charles Murray observed that welfare changed “the rules of the game” for the poor—in terms of working, forming a family, saving money, getting an education, etc. (Losing Ground: American Social Policy, 1950-1980; New York: Basic Books, 1984). With the War on Poverty, the elites dramatically changed incentives for the poor, especially for family structure.

Along these lines, Liu’s two chapters on children and family are important, but illustrate a strange disconnect in her thinking. She notes that the PMC preaches that marriage and traditional families are not important; they argue that concerns about family structure and stability are overblown or even irrelevant. But then in their personal lives, they treat marriage as highly desirable and productive. (Charles Murray addresses this with Belmont vs. Fishtown in Coming Apart: The State of White America, 1960-2010 [New York: Crown Publishing Group, 2012])

Ironically, Liu’s discussion of welfare ignores class-based explanations! She perpetuates the myth that Reagan slashed social spending. And she confuses “demonizing the poor” with the critique of Reagan and Murray about what government was doing to the poor (p. 15). She’s old enough to remember when liberals also criticized welfare programs—for dehumanizing the poor through bureaucracies, but maybe she wasn’t paying attention back then.

The more-recent obsession on race (over class) has often had an exceedingly negative impact. Liu is helpful here too. As with “fragility” (White and Black) and the most popular applications of “systemic racism,” the PMC practices a terrible form of religion—with a nasty “rhetorical tone” (p. 9) and various forms of “asceticism” (p. 10). Its members “police each other to enforce the sort of social and intellectual conformity required by their class” (p. 73).

The result of this “woke religion”: guilt without the Cross, “original sin” but only for certain groups, scapegoats without salvation; hypocritical virtue-signaling (a la Matthew 6:5-18) without socially-beneficial virtues. Joshua Mitchell calls this “a fourth religious awakening”—unfortunately, without God, forgiveness, or redemption (American Awakening: Identity Politics and Other Afflictions of Our Time; New York: Encounter Books, 2020).

In all of this, I agree with Liu when she exhorts her readers: “We must be heretics. We should blaspheme” (p. 77). For Christians, this false religion is not only wrong but hostile to basic freedoms. So, we pray for our leaders so “we may live peaceful and quiet lives in all godliness and holiness” (I Timothy 2:1-2). But this isn’t just about Christianity. If our country does not have enough liberals who will engage in heresy and blasphemy against the Left’s now-dominant religion and its PMC values, our future will likely be bleak and merciless.