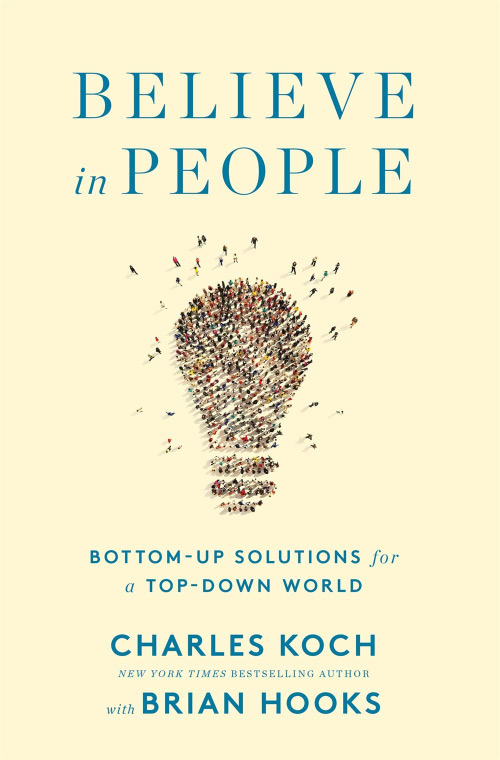 Believe in People
Bottom-Up Solutions for a Top-Down World
Charles Koch, with Brian Hooks
Kindle Hardcover Audiobook Audio CD
This book review is a web exclusive for the Spring 2021 issue of The Independent Review.

I walk into a room in my house. It’s dark, so I turn on the light. Now, all the contents of the room, and the room itself, are more valuable to me, because I can see them and use them. That means I am an entrepreneur: the contents of the now-lighted room are more valuable than they were in the dark. I corrected a mistake (the lights were off), because that’s what entrepreneurs do.

This view of entrepreneurship, though at the level of firms or market actors responding to “mistakes” in resource allocation, was laid out by Israel Kirzner in his 1979 book, Perception, Opportunity and Profit: Studies in the Theory of Entrepreneurship (University of Chicago Press). Entrepreneurs use “awareness” to identify mistakes and correct them, and capture the profits that result. Unfortunately, the idea of social entrepreneurs being aware and putting community resources to better use has been neglected (see Michael Munger, “Making the Voluntaryist Venn Work For Us, Not Against Us.” The Independent Review. 2019. 23(4): 503-520).

A new book by Charles Koch and Brian Hooks redresses this error. An objection that is sometimes raised is attributed (I think wrongly) to Ludwig von Mises (Human Action: A Treatise on Economics, 2007, Liberty Fund): the only two domains are “the state” and “markets.” And markets use prices. So any process that doesn’t rely on price is statism, and should be rejected.

But as Munger (2019) points out, there is a tradition in classical liberalism that embraces what Richard Cornuelle called “the independent sector,” dating back at least to Alexis de Tocqueville. Many of the most important problems in society are not amenable to solution by markets, because property rights are diffuse and there are intersubjective components to the goals. Koch and Hooks hark back to this tradition, in a way that’s both timely and persuasive.

In the case of my example of the dark room, the “error”—leaving the light off—was subjective. What I mean is that the “value” of the room, dark and light, is a matter of individual taste and contingent circumstance. If the sun is shining through the window, or I want to sleep, I’ll be aware of those conditions and leave the light off. Many of the problems that society faces, in health care, in education, in poverty, and other arenas are scaled-up versions of thousands of micro-level “somebody needs to turn the light on, or leave it off” challenges. There is no universal answer, and any top-down—“all lights must be on” or “off”—solution will fail. Individuals empowered to use the resources they already have can micro-optimize according to particular local conditions. There would be no policy problem in the first place, because decentralized action would already have solved it.

Maria P. Paganelli (“Adam Smith: Why Decentralized Systems?”, Adam Smith Review, 2, pp. 203-208) gives a compelling interpretation of Adam Smith’s focus on decentralized, bottom-up approaches to social problems. Humans are imperfect, poorly informed, and subject to over-estimating their own importance and abilities. The social system of propriety has evolved over time to correct and redirect individual sentiments and actions in socially more beneficial paths. The individual and the society are both made better off by multiplying the number of “decision centers” around him/her.

Yet, scale is a trap. We want large-scale solutions to social problems, which suggests large-scale planning. The insight of the “local entrepreneurship, light and dark” view is that it makes clear how rapid solutions require a bottom-up approach. Some people want more light, others like the dark, and some people are about to leave to walk the dog. Should the light in that room, now, be on or off? No central planner or hierarchical regulation could solve the problem. But the bottom-up, decentralized system works well: each person, at each point in time, decides whether to turn on the light or to leave it off.

F.A. Hayek, in his celebrated article, “The Use of Knowledge in Society” (American Economic Review, 1945), pointed out that prices coordinate the actions of myriad individuals by constantly updating (mostly) accurate information about the value of resources. Is there an analogous approach, lacking prices, to solve social problems? As the title of the Koch and Hooks’ book suggests, the answer to non-market problems is to empower “social entrepreneurs”; to do that, we must Believe in People.
As Koch puts it on p. 4, his “North Star” was clear early on: “Do all I can to empower people so they can transform themselves—and the world around them.” In a sharp, but effective, critique of Progressive policy interventions, Koch notes that many attempts to help the public are in fact “predicated on distrusting and discounting them” (p. 5). The reason why technocrats and experts must order people around and protect them from harm is that citizens are too ignorant, or dim-witted, to look out for themselves. (Somehow, the technocrats are supposed to be immune to the biases and cognitive problems that cripple the commoners!)

But if we “believe in people,” then almost everyone is capable of making their own choices, and deciding how best to help each other. “When people are empowered, they find solutions to the problems they are closest to, as they have the proximity and knowledge to do so” (p. 4). A striking part of Koch’s account is that he openly repudiates his own earlier focus on formal organizations—including the Republican Party: “By the mid-2010s, it was clear that...partisanship was not the answer” (p. 14).

Koch recognizes that his previous book, Good Profit (Currency Press, 2015), with its focus on “Principled Entrepreneurs,” wasn’t wrong but it wasn’t truly transformative: “Whereas in Good Profit I demonstrated how the principles of social progress can be applied to build a better organization, in Believe in People I show how those same principles can help you build a better society” (p. 6; emphasis added).

A number of early commenters on the book have expressed surprise at this seeming admission of political error. After all, Koch support has been identified with a hyper-partisan, and frankly “top-down” Republican movement since the 2000 election, at least. I think it is fair to take Charles at his word, accepting the claim that the support of the Republicans was a means to an end (“We bet on the ‘team’ whose policies we believed better enabled people to improve their lives. You only get two choices in our system, so we chose the red team,” p. 14). When the ends were not achieved, the means were abandoned, with a substantial drop-in support for Republican candidates (to be fair, it’s not yet clear that’s entirely true, but that is the claim in this book). A social entrepreneur, and that’s surely how Charles Koch sees himself, has to be aware of error, after all. Especially his own.

Putting all that aside, the central claim of the book is interesting and important in its own right. Seeing people as assets, rather than mentally and financially impoverished weaklings to be managed and cared for, is an important move. The simplest way to see the contribution of Believe in People, though, is to return to the light switch example I started with. Suppose you wanted to find a policy that would ensure that most of the light switches in the office buildings and homes of the United States were in the optimal position. You could have a set of rules and policies, with complicated contingencies, and perhaps software to implement these policies. Or, you empower the people in those rooms and those offices to make their own choices and give them accessible switches they can manage. Clearly, Believe in People is advocating for the second path. And social entrepreneurs are turning the lights back on, all over America.