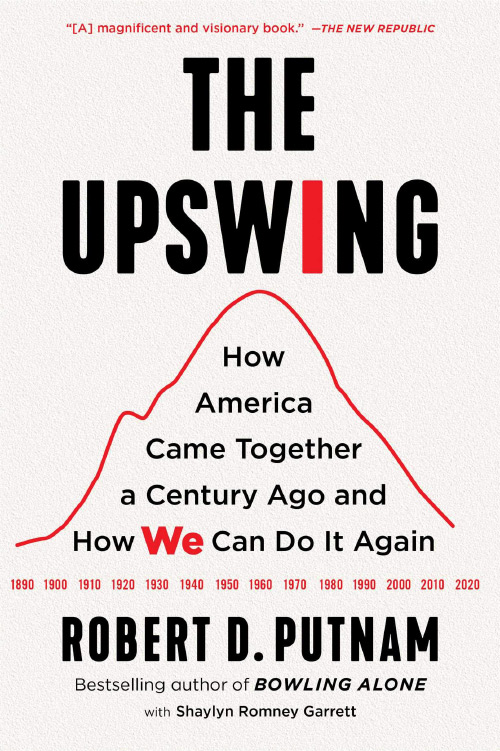 The Upswing
How America Came Together a Century Ago and How We Can Do It Again
Robert Putnam and Shaylyn Romney Garrett
Kindle Hardcover Paperback Audiobook Audio CD
This book review is a web exclusive for the Spring 2021 issue of The Independent Review.

The Upswing is a sweeping work covering six dimensions of life in the United States from 1890 to today. The book’s central argument, summarized in the first chapter, focuses on what Robert Putnam and Shaylyn Romney Garrett refer to as the “I-We-I Curve,” an inverted U-curve describing American life over the last century and a quarter. This statistical summary of a wealth of data depicts American history as a movement from inequality, partisanship, isolation, and individualism in the 1890s to equality, comity, sociability, and communitarianism in the 1960s, what the authors term the “upswing.” This upswing then reversed, and America returned to its 1890s woes by the mid-2010s. The book is no mere exercise in data fitting, however. Alongside the numerous statistical sources is a qualitative, historical narrative that situates the changes in each dimension within their relevant sociopolitical history.

The second chapter presents evidence that economic equality rose from the early to mid –twentieth century and then began to fall, continuing to fall as long as data are available. The authors point out that throughout this period incomes were rising, albeit at a slowing pace, and education was becoming more widespread. However, at the same time, evidence points to an inverted U pattern in wealth equality, income equality, and intergenerational economic mobility. The authors attribute this to a race between education and technology as well as inverted U-shaped changes in unionization rates, fiscal policy, financial regulations (especially antitrust), and the minimum wage.

Political comity, the opposite of partisanship, likewise follows an inverted U-curve according to the data presented in chapter three. Cross-party collaboration in Congress, party conflict reported in the national press, split-ticket voting, and partisanship in presidential approval ratings all show a pronounced inverted U. A substantial contributor has been the rightward shift of the Republican Party since midcentury. Explanations of the pattern include the possibility that elite partisanship influenced the masses’ politics to rising partisanship after 1960, and the possibility that voters today are more effectively sorted into parties along ideological lines. If the latter is the case, it raises the question of whether Democrats and Republicans’ feelings towards each other is the relevant topic to consider. The more relevant question may be how people of differing political ideologies regard one another.

The argument in chapter 3 will be recognizable to those familiar with Putnam’s previous book Bowling Alone (New York: Simon & Schuster, 2000). According to this argument, which is repeated in The Upswing, social capital in the United States has declined since midcentury, meaning that Americans are less sociable and connected to each other today. Other sociologists have criticized this claim, saying “The thesis that social capital is on the decline in the United States and elsewhere is obviously premature and, in fact, false” (Nan Lin, Social Capital: A Theory of Structure and Action, Cambridge: Cambridge University Press, 2004, p. 237). Part of the suspicion around Putnam’s claim extends from his reliance on data regarding membership in organized social groups, like the Shriners or the Knights of Columbus, whereas many social relationships take place outside these formal structures. However, these data, when extended back to the start of the twentieth century, reveal an inverted U-curve, as do data concerning generalized social trust, median age at first marriage, marriage rates, and motherhood by 30 and 45. If these are related, there is a case for saying sociability in American life followed the I-We-I curve.

To show that American culture followed the now well-worn path of other indicators, chapter 5 details how American culture has traveled from individualism to communitarianism and back again. Using data from Google Ngram, the authors highlight how the use of words and phrases like “social gospel,” “association,” “socialism,” “cooperation,” and “conformity” fits the expected pattern. Furthermore, conventionality in baby names was high from 1920 to 1980 but was much lower before and after that period. Even the ratio of the word “We” to “I” rises from 1900 to 1960 before plummeting thereafter. However, my quick search on Google Ngram reveals that the words “special,” “individual,” and “private” show the opposite pattern from what the authors’ theory would predict, so the major takeaway from their evidence is unclear. The authors also argue that the rejection of conformity present in such 1950s novels as The Catcher in the Rye or On the Road is a form of backlash and constitutes evidence for a highly communitarian society during this period. However, if criticism of conformism constitutes evidence for the presence of communitarianism it is unclear what could constitute evidence against the authors’ argument.

The authors are careful to note throughout that although the I-We-I curve is the pattern borne out by their data on many features of American life, the American “We” during much of the twentieth century excluded or subordinated a large percentage of the population through marginalization of ethnic minorities and women. There is extensive discussion of African American history and the civil rights movement in chapter 6, and women’s history and the women’s movement in America in chapter 7. Unfortunately, however, it is unclear what the authors believe should be revised in the I-We-I story in light of this marginalization, as they do not significantly complicate their picture. They observe that the mid-century civil rights movement was in part a product of the rising unity of American society and that the tumult of the 1960s social movement may have contributed to the mid-century reversal of the curve. Otherwise, however, the discussion in each chapter reads almost as though there were parallel historical dramas playing out alongside the I-We-I curve, dramas that deserve mention and occasionally interacted with the curve but that generally do not challenge its validity.

The penultimate chapter addresses causality. Earlier in the book, the authors describe the Progressive Era as establishing a set of reforms that enabled the upswing, but, unfortunately, no particular element of the I-We-I curve stands out as a major driver of the observed changes. Admirably, the authors state that their original hypothesis, that economic inequality was the primary cause, is belied by the fact that economic inequality lagged the other variables. They regard the changes in inequality as likely a consequence of something else, instead. Expanding government spending is likewise a lagging variable. Rising economic prosperity, war, gender and racial backlash, and more are each in turn rejected as candidates for a main cause. At this point, the chapter somewhat jarringly changes subject to an analysis of social change in the 1960s that provides little insight into what is arguably the most important question of the book.

The final chapter addresses how the authors believe “the engineering of a new American upswing” (p. 330) might happen. They trumpet three Progressive Era social reformers to argue that their generation of activists set America on the path for the first upswing. Among the progressives, racism was very much the norm, and the authors argue that this exclusion contributed to the unraveling of the upswing in the 1960s. Hopefully, the authors contend, with a new moral awakening akin to the social gospel movement of the Progressive Era, one without the progressives’ racial prejudice and with a focus on changemakers among today’s youth, a new upswing can begin, especially in the wake of popular protest movements against racial injustice and various elements of the Trump presidency.

Although the breadth of coverage in The Upswing is admirable, and the sheer quantity of historical evidence is impressive, it is ultimately unsatisfying both in most of its descriptive claims and in its normative prescriptions. I have expressed evidence-related misgivings above, but more generally one can question whether it makes sense at all to contend America was more cohesive in the midcentury so long as one disregards people who were marginalized based on their race, gender, religion, national origin, sexuality, or disability status. Accounting for the way these forms of marginalization interlock and how their marginalization shaped others’ lives means the analysis of the I-We-I curve cannot be so simple as restricting the discussion to the non-marginalized subpopulation. There can be little doubt that the U.S. of the past six or so years has been experiencing a period of unusual political strife and cultural conflict, but whether this is the second low point of a century-long curve remains to be proven.

Furthermore, it is unclear how coherent the curve is even if the “We” it depicts were more cohesive. Are economic equality, political comity, sociability, and communitarianism really structurally interrelated, or is the I-We-I curve a kind of running evaluation of American life? The lack of a strong theoretical backing to the curve raises questions about how relevant the pattern really is for anything beyond historical summary.

As for the authors’ prescriptions, the call for a new moral awakening to answer the problems of the U.S. today is laudable, as is the recommendation that a new generation of social entrepreneurs take up a broad swath of issues. In this much, I find great value. Unfortunately, the authors seem to regard local and problem-specific efforts with suspicion, saying these appear to be a kind of “War of the We’s” (p. 332) and preferring a coordinated movement for “large-scale reform” (p. 332). The authors occasionally use libertarians as a kind of intellectual punching bag, but libertarians and social anarchists alike may balk at the call for mass politics when material change might be more readily achieved through a robust civil society and mutual aid. The closing section of the book discusses a hypothetical and uncharitable argument, attributed to libertarians in a quote from Harvard political scientist Danielle Allen, that there is a zero-sum tradeoff between community and individuality. A familiarity with intellectuals drawn on by libertarians, like Adam Smith, Alexis de Tocqueville, Friedrich Hayek, Richard Cornuelle, Vincent Ostrom, and Elinor Ostrom, belies this. A great moral awakening to address pressing social problems could easily be more likely to succeed through a polycentric network of overlapping efforts. This would be not a “War of the We’s” but a true community of individuals.