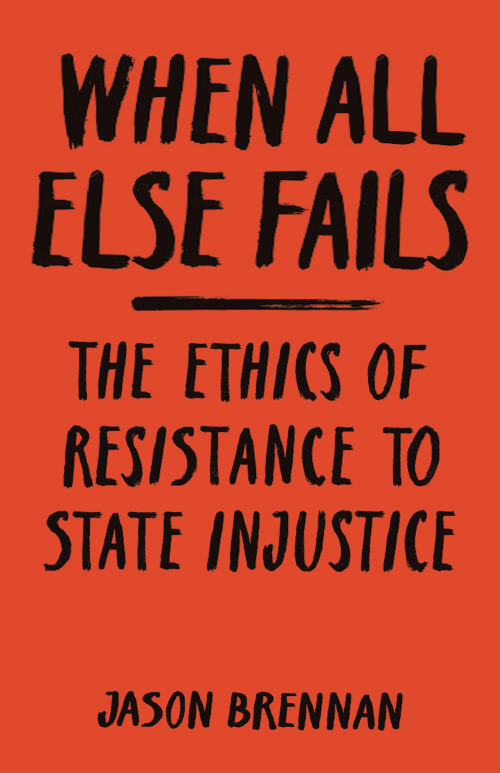 When All Else Fails
The Ethics of Resistance to State Injustice
Jason Brennan
Kindle Hardcover Paperback
This book review appeared in the Spring 2021 issue of The Independent Review.

Brennan’s arguments are powerful in part because of the minimal foundations to which he appeals. Although he recognizes that libertarians and classical liberals will likely be sympathetic to his conclusions, he does not rest his judgments on libertarian, much less anarchist, premises. Instead he frames his arguments in ways designed to persuade people who embrace a wide range of understandings of the grounds and limits of state power, suggesting that his conclusions should be persuasive to social democrats, say, as much as to libertarians. And although he sometimes dissects real or envisioned philosophical arguments for particular positions, he defends his thesis primarily by appealing to moral intuitions he believes almost everyone will share.

Brennan defends the simple and intuitively plausible idea of moral parity: that is, when asking whether it is reasonable to use force or to lie, it shouldn’t matter whether one’s target is a state or a nonstate actor. He defends moral parity with admirable clarity by outlining a series of cases involving resistance to injustice by nonstate actors in which it will seem obvious to most people that force or lying was appropriate.He then goes on to elaborate a set of parallel cases involving injustice by state actors. If we believe force or lying is appropriate in the former set of cases, we might well feel uncomfortable about denying that they are appropriate in the latter.

Brennan doesn’t pretend that the appeal to intuition is enough to establish his moral parity thesis. Rather, he recognizes that a variety of arguments might be used to establish a special immunity for government actors from the kinds of defensive force or lying to which nonstate actors might appropriately be subjected. And he provides clear and vigorous responses to these arguments.

He critically examines the idea that governments have authority, that they can create special obligations for their subjects. He notes that political philosophers of multiple ideological stripes have tended increasingly to agree that arguments for governmental authority in this sense fail, even if they maintain that some governments may legitimately coerce their subjects. He notes that a variety of other objections to moral parity fail, too. Good reasons to avoid being a vigilante don’t count against using defensive force against state actors in emergency situations, for instance. Peaceful strategies may lead to policy changes but are unlikely to enable people to stop individual instances of abuse, so people can’t be obligated to opt for these strategies in the face of individual violent threats. We should be careful about using violence defensively, but that we should do so isn’t a reason not to use it defensively against state actors.

The fact that a state actor is following the orders of a political, bureaucratic, military, or law enforcement superior doesn’t give me a reason to avoid responding forcibly to injustice on the actor’s part. And such orders don’t give the subordinate any sort of permission to act unjustly or to ignore moral requirements that preexist and are independent of any obligation she might have to obey her superior. Some state actors might be thought to have fiduciary duties to the state, but even if they do, such duties can’t exempt them from prior, independent moral responsibilities.

Brennan helpfully disposes of the idea that state actors must sometimes follow directives they know are unjust. He shows, among other things, that proponents of “public-reason” justifications for state coercion will have great difficulty supporting the idea that state actors must follow orders they know to be unjust. He also notes that although superiors may sometimes know more about a given situation than their subordinates, subordinates will often have and reasonably believe that they have enough information to identify orders as unjust and so worth breaking. They will even in some cases be reasonable in believing that their superiors are appropriate targets of force designed to keep them from unjustly injuring others.

Brennan thinks we ordinarily suppose that although it is wrong to lie simply to gain some personal benefit, it is acceptable to lie in order to stop a serious injustice or the equivalent. Whatever the defensible limits on lying, he shows that we have no reason to treat government agents any differently than we treat other perpetrators of injustice. It will be reasonable, then, to lie not only to the Nazi at the door but also to someone who might punish me for consuming illegal chemicals. He also maintains that it is appropriate on similar grounds for politicians to lie to voters so that the politicians can gain opportunities to prevent or end various state injustices. Similarly, he suggests that judges are entitled not only to refuse to issue orders mandating compliance with unjust laws but also to lie about the putative meaning of the law in order to preclude serious government wrongdoing.

Although defending the right to resist unjust state actions, Brennan is chary of the view that we are obligated to resist. There may be an imperfect obligation to resist state injustice, an indeterminate obligation that can be fulfilled in multiple ways and that need not dominate our lives, though Brennan remains uncertain about this. Perhaps in a narrow range of cases, ordinary people might have strict duties to resist, but this won’t ordinarily be true. Some state actors, however, might have more robust duties to interfere with unjust choices by other state actors. Brennan incisively demolishes the claim that ordinary actors acquire strong duties of resistance because failing to resist would somehow render them complicit in the injustices they fail to resist, emphasizing that complicity requires purposeful cooperation.

Not everyone will share the underlying intuitions on which the book draws. For instance, arguing that if it is permissible to lie to nonstate aggressors, it is equally permissible to lie to state aggressors, Brennan treats it as a desideratum of an acceptable moral theory that it not endorse an unqualified prohibition on making false assertions. And, of course, he may be right that such a prohibition is irrational. The rigorist tradition as regards lying, associated especially with Augustine and Kant, might or might not be right. I have argued against it in print in some detail (see Gary Chartier, “Lies,” in Flourishing Lives: Exploring Natural Law Liberalism [Cambridge: Cambridge University Press, 2019], 69–85), and I confess that I hope it is mistaken. But it may stand up to criticism more effectively than Brennan supposes (as Chris Tollefsen, among others, has argued; see, e.g., Chris Tollefsen, Lying and Christian Ethics [Cambridge: Cambridge University Press, 2014). Of course, again, Brennan’s view is that we may lie to state actors in cases in which we may lie to others, and that view seems obviously right whatever we make of Augustine or Kant on lying.

Brennan’s proposal that judges are entitled to lie when interpreting laws and constitutions in order to prevent injustice is provocative. Judicial lying will of course be possible only in a limited number of cases. A Supreme Court justice won’t be able to rule that, say, a dangerous president’s term of office should be understood as two years rather than the Constitution’s four or that, given an out-of-control Speaker of the House of Representatives, the Senate rather than the House should elect the Speaker. The relevant constitutional mandates are clear. The option to lie will arise only when there’s space for judicial discretion, and there’s space for judicial discretion only when constitutional or legal phrases are vague. But interpreting phrases such as “the freedom of speech” or “cruel and unusual punishment” or “due process of law” in ways that preclude injustice need not be deceptive: it may instead be a matter of using our best considered moral judgments to interpret phrases that are morally laden and that invite moralized readings.

Thus, the issue of lying seems likely to arise only for a judge who embraces an historically driven account of constitutional interpretation—as, for instance, one that ties the meaning of a given constitutional text to its original public meaning. This kind of interpretive strategy leaves something to be desired, but a judge who endorses it is likely to do so not on the basis of general hermeneutic criteria but rather in light of normative considerations regarding the importance of legal transparency and reliability.

These normative considerations will enter into the judge’s understanding of what she is morally required to do when confronting a given case. As a result, she may grant that lying to state actors, including those who will implement her decision in the relevant case, is permissible, and she may agree that the actions they will perform if she interprets the legal or constitutional text in light of what she takes to be the correct theory will be unjust. But she may also conclude that because of the systemic role her decision can be expected to play and the importance precisely on moral grounds of affirming the interpretive values she endorses precisely, it would be wrong, all things considered, to ignore her historical theory of interpretation. And, given her systemic role and the general considerations that lead her to embrace that theory, she might take this view quite consistently.

Whatever we conclude about the issue of judicial lying, Brennan has made what seems to me to be an essentially unassailable case for the moral parity thesis. It would be easy to take this thesis in a more radical direction, to see it as grounding at least a presumption in favor of anarchism. Brennan carefully and deliberately declines to do that. But the case he has made is thoroughly radical nonetheless—and very well argued.