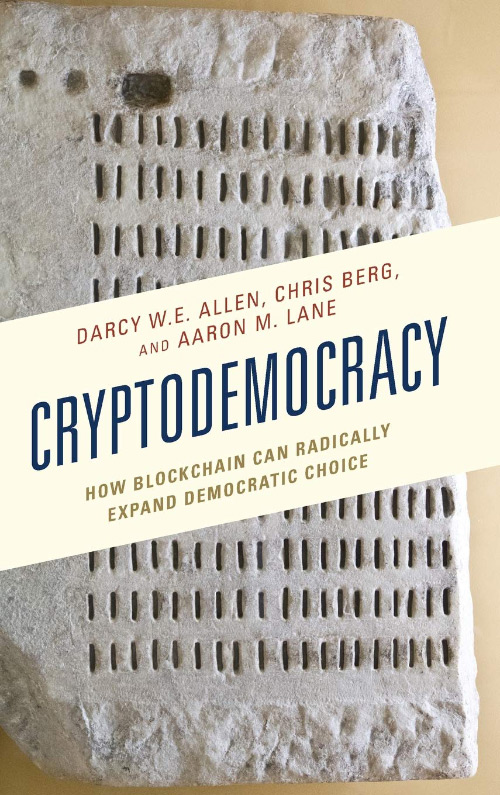 The title of this short book is Cryptodemocracy, and its chapters detail the ways in which blockchain technology can assist collective action and decision making primarily through the establishment and delegation of bundles of voting rights. However, the less obvious but perhaps more radical beating heart of the book lays in describing how blockchain technology may make it possible to choose not just how to allocate voting rights within a democracy but the rules of collective decision making tout court. “Voting” therefore is a stand-in for voluntary agreements between people that include the possibility of delegating decision making in a system that is unconstrained by the need to resemble modern democratic decision making, or really, anything that could conceivably be called democracy.

Chapter 1 (“Introduction”) is a substantial standalone read that effectively summarizes the primary approach and arguments of the book. In particular, it expounds upon the technological capabilities of the blockchain that grant its advantage over traditional ways of coordinating between the disparate goals of people, goals which themselves may rely on collective participation to exert their full benefit.

Because it is necessary to understand the subsequent points, let’s summarize the technological advantages of blockchain for coordinating the disparate goals of people. Blockchain is decentralized by its proof-of-work mechanism, which can be conducted by anyone in the mining network and rewards miners with Bitcoin or another cryptocurrency as defined by a particular fork off the original Bitcoin blockchain (of which there are hundreds to date, the vast majority of which are not financially successful). The majority (51%) attack possibility is low in mature and successful networks, which attracts at the time of writing something north of 100,000 miners, though good estimates are hard to come by given the secretive nature of mining pools. That means blockchain is censorship resistant. A consensus over facts in the blockchain is possible even in the presence of noncooperative agents (it is byzantine fault tolerant).

The Ethereum fork in particular has a Turing-complete programming language and allows for the running of complicated scripts like smart contracts, which utilize byzantine fault tolerance and censorship resistance to allow agreements between any trading partners that specify some conditions one party must meet for payment placed in escrow to be received by that party. Only when the conditions are met is the payment in escrow automatically released; this enables the counterparty to maintain property rights over the payment, circumnavigating the principal-agent problem.

The core argument is that (p. 10): “the cryptodemocratic framework we describe in this book is best understood not as a specific system of government . . . but as a base layer of economic and political infrastructure on which a variety of systems of government can emerge.” The authors do not shroud this point in esotericism even though they focus their world-building on more robust sorts of democratic sociopolitical configurations. This is for the best. The hypothetical “What if?” rabbit hole can distract even the most fastidious reader from the basic point of a speculative text of this nature. It’s best to demonstrate how a new kind of governance technology like blockchain could alter existing kinds of governance and let readers draw their own conclusions regarding novel forms.

Chapter 2 (“Technologies of Choosing”) centers blockchain technology as merely another in a growing set of technologies of collective choice, such as democratic choice within the institutions of representative democracy. The authors discuss the technologies of pre-democratic collective decision making, language itself the earliest and perhaps most awesome. They discuss Athenian democracy in detail, focusing on who­­, how, and when votes were made. Their thesis is that technology is intimately related to what type of collective choice is adopted, which they support sufficiently in describing balloting systems all the way through “pregnant chads” and digital voting. Blockchain, they argue, is the latest enabling technology and may itself change the form of voting much as did its predecessor technologies.

Chapter 4 (“Delegating the Vote”) follows up on this claim by elaborating upon the ways in which voting could change vis-a-vis the blockchain, primarily by arguing that blockchain voting could better represent the intensity of social preferences than is currently possible, and in a more egalitarian fashion than expensive lobbying and rent seeking. As Walter Williams likes to say—perhaps paraphrasing Armen Alchian: you don’t own something unless you have the right to sell it. What would it mean to have property rights in your vote, or a bundle of issue-specific votes, and have the right to delegate the right to vote on your behalf, or the right to sell your vote? Delegation is another principal agent problem which might be circumnavigable by smart contracts, as explained above, and particularly if one imagines voter representation as a matching problem. Vote selling creates a price system in votes, recalling how the price system is particularly good at allocating scarce resources to where they are most valued (in this case, voters with the most intense preferences). Whether blockchain-enabled vote selling leads automatically to rule-by-the-rich—more so than currently—is unclear, and could be prevented by voting on rules to constrain such behavior at the outset.

Chapter 4 and Chapter 5 constitute the argumentative foundation for the book. Chapter 5 (“Bargaining and Exchange in a Cryptodemocracy”) picks up where Chapter 4 left off, essentially attempting to establish a price theory of voting in a cryptodemocracy. Unlike traditional price theory, “[p]references in a cryptodemocracy are not taken as given—they form and evolve through interactions with others” (p. 83). Here we see the re-emergence of the beating heart, this idea that blockchain voting may allow collective choice to be organized in ways that might not look very much like traditional analog democracy. Regardless of what a cryptodemocracy might look like, “its analysis should begin from the perspective of voter exchange,” explain the authors (ibid). The true purpose of co-creating political institutions isn’t necessarily to conduct constrained optimization over a presumably fully coincident and stable system, but to allow for knowledge production and expansion in the institutions of collective organization under the assumption of within-system conflict and open-ended systemic growth.

Chapters 6 (“Cryptodemocratic Corporate Governance”) and 7 (“Cryptodemocratic Labor Unions”) focus on specific examples of collective choice whose membership, processes and property rights are positively affected by utilizing the blockchain. The examples are straightforward and follow directly from the foundation laid in the previous chapters. Chapter 8 (“The Future of Cryptodemocracy”) summarizes the preceding arguments and returns to the beating heart by generalizing the concept of a cryptodemocracy to “delegative political entrepreneurship” (p. 137), whereby delegates are themselves incentivized to create their own private orderings, “the provision of goods and services in exchange for votes” that is “analogous to the emergence of nation states” (ibid).

Delegate-led polycentric organizational forms “are emergent voluntary states” wherein “individuals maintain the potential for exit” (p. 138). That is, cryptodemocracy, for the first time in history, could divorce governance from its geographic locus and allow for true, borderless competition in collective decision making. The authors wisely end with this barest hint of a hypothetical, leaving their readers to complete the world-building task on their own.