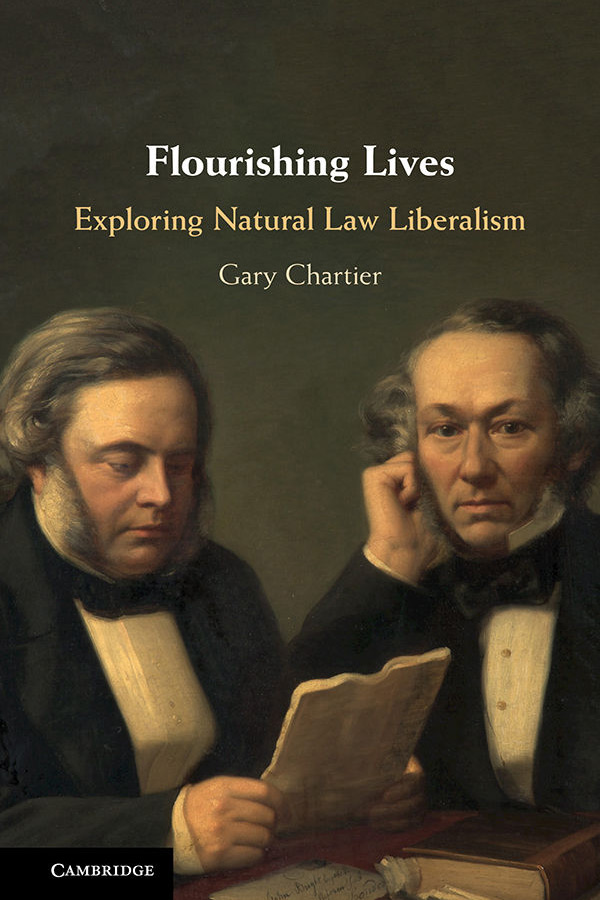 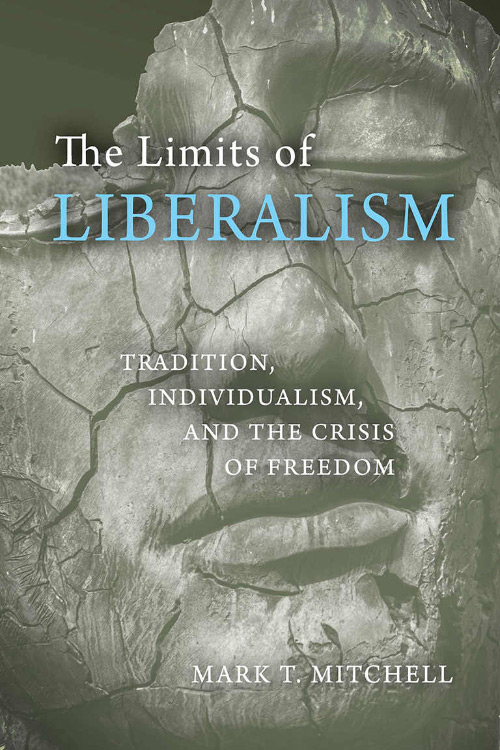 The Limits of Liberalism
Tradition, Individualism, and the Crisis of Freedom
Mark T. Mitchell
Kindle Hardcover
Reviewed By Jason S. Canon
This book review is a web exclusive for the Summer 2020 issue of The Independent Review.

“Exploring” names the approach. This is not an argument—at least not an explicit one—for bolstering liberalism with natural law theory. Chartier’s aim is more modest: to show, through a study of social problems large and small, that the “new” natural law theory of writers such as Germain Grisez and John Finnis can point toward a better, broader liberalism.

The book’s uniqueness is plain from the table of contents, with chapters ranging from lawyering to lying to civil religion. Chapter 3, for example—the longest in the work—concerns academic grading. Flourishing Lives asserts, implicitly but clearly, that a commitment to free and fair societies will lead us beyond concerns of state and market. Shouldn’t liberalism speak to subjects so essential to our well-being? Shouldn’t prosperity mean more than wealth?

An early chapter on the ethics of boycotting meat establishes the book’s method: identifying why liberals ought to care; drawing on natural law analysis in examining the issue; concluding by returning to liberal themes. With meat, the value liberals place on cooperation, exchange, and freedom from suffering leads to a concern for animal welfare, and Chartier thinks that here natural law theory can improve our understanding. The chapter unpacks the proposition that “People have decisive reasons... to avoid killing nonhuman animals... for the purpose of eating their flesh, and to avoid torturing or otherwise purposefully injuring them under any circumstances” (p. 34). Chartier does not defend this view, and in this the chapter is much like the book itself: it satisfies the author’s purposes to state the proposition and its consequences. Few skeptics will be converted.

And so the book progresses: Chapter 3 argues that grades should be given only on grounds of subject-matter competence, Chapter 7 challenges Richard Rorty’s political theology in Achieving our Country, and so on. In each chapter, the author offers reasoned reflections on neglected themes and—most importantly—exemplifies an approach to liberal theorizing that is capacious, clear-eyed, and kind. Would that more liberals had Chartier’s sympathetic eye.

That accomplishment suffices to make the book a success, but we sense Chartier wants more: not to simply record the liberal results of natural law reasoning, but to defend a liberalism built on the work of Grisez and Finnis and their followers. Without that defense, and without a sustained treatment of its implications, many of the book’s broader questions go unanswered. Why is natural law liberalism radical? Other liberalisms will, for example, arrive at similar conclusions on grading. What does liberalism gain from a grounding in natural law? What does it lose? What to do with the misbegotten conclusions of natural law theorists on, say, the immorality of contraception?

Chartier gestured toward these foundational questions in Economic Justice and Natural Law (2009) and Anarchy and Legal Order (2013), but there too backed away from sustained defense. Such explanations are more than niceties for the present work, though, with its claims that “Radical liberals are, in a word, anarchists” (p. 280) and “the kind of natural law theory I employ here rejects... unnecessarily intrusive and conformist social pressure. It thus affirms autonomy” (p. 281). These are undoubtedly true of the author’s own commitments, but he’s yet to show why they follow from his premises.

One hopes to find such elaborations, and more of the same heterodox goodwill, in Chartier’s next book.

None of Chartier’s sophistication is found in Mark T. Mitchell’s The Limits of Liberalism: Tradition, Individualism, and the Crisis of Freedom.

The book presents a challenge to the charitable reviewer. Charity to the author means considering the book in its best light, according to its own ambitions; charity to the reader means stating, plainly and emphatically, that this is a bad book.

To be clear: a good book on this subject would be welcomed. In theory, liberalism is rich with resources to interrogate traditions; in practice, liberals are often caught on their heels. Take any culture war conflict—from transgender equality to Confederate monuments—and note how meekly our words ring against conservative klaxons. Note too how quickly the conviction of liberal rectitude comes to justify state action. Liberals are weakest on questions of old and new. This makes sober critique invaluable.

Mitchell avoids such critique, and shows complete disinterest in actual liberal thought. We are told in the opening pages that liberals—the theorists named are Thomas Hobbes, John Locke, Jean-Jacques Rousseau, and John Rawls—“developed a conception of ‘natural’ man... completely unattached to other humans” (p. 2). Mitchell’s alternative to liberalism is “humane localism” (p. 268), mentioned exactly once in the final chapter, which amounts to appreciating happy things.

The “unencumbered self” is as fresh-faced here as in the days of Crystal Pepsi. Mitchell’s analysis includes the legendary exhortation to “Consider the iPhone, whose very name suggests the isolated self as the locus of control” (p. 15). His summary of the 2017 white-nationalist Unite the Right rally is: “Things got violent. A woman was killed” (p. ix). Even the prose offends: shifts are inevitably “seismic,” and truth is something we feel “in our collective bones” (p. 1). Mitchell is at his strongest in the central chapters summarizing Michael Oakeshott, Alasdair MacIntyre, and Michael Polanyi, but gets little theoretical payoff from their work. (I ignore the parodic analysis of T.S. Eliot’s poetry.)

Mitchell’s thesis, developed at the book’s end, is that traditions matter because they carry knowledge, and because liberalism rejects tradition in favor of individual choice, it must be replaced. Five errors have led to this conclusion.

To begin with the most obvious: liberalism is a tradition. This means, at a minimum, that liberals do not reject all heritage. The author explains, as if to preempt this objection, that the liberal tradition “has ossified into an ideology” (p. 213). If only liberals were as free of ideology as the author! The traditional nature of Western liberalism gives Mitchell a burden he does not meet: to show us how to weigh the merits of competing traditions, and how to vacate our own for his alterative. Mitchell is aware of the difficulty; he finds Oakeshott’s analysis wanting on exactly this question (p. 96). But the author’s own attempts to move beyond liberalism (p. 218) lay bare the limits of his approach.

Second, Mitchell fails to consider why liberals give priority to individual choice. The book never grapples with the hard cases: gender equality, racial equality, sexual freedom, and so on. Mitchell never asks when emancipation from tradition might be necessary. What good to the slave is tradition? What good to the child bride? Liberals stress individual choice because traditions are so often unjust. We aren’t oblivious to the “knowledge” being transmitted; we recognize it as noxious, and reject it.

Third, ignoring Stephen Holmes’s advice in The Anatomy of Antiliberalism (Cambridge, Mass.: Harvard University Press, 1993), Mitchell confuses liberal society and liberal values, assuming that defects in the former are caused by the latter. To wit:

“It is no surprise that birth rates have plummeted in virtually all countries touched by liberalism.... it appears warranted in concluding that liberalism, in the form of plummeting birth rates, destroys societies.” (p. 215).

Let it be noted that liberals, whatever their faults, do not reject multivariate analysis.

Finally, and most damningly, the author never shows why we must abandon liberalism. Grant his diagnosis. Grant that liberalism cares too little for tradition. Why not simply reform it? Mitchell works hard to frame his “tradition-constituted liberty” (p. 218) as an alternative to, rather than a correction within, liberalism. But what liberal would deny the importance of Mitchell’s preferred platitudes of acknowledging “the role of limits” or the “notion of inheritance”? (p. 220). What is essentially incompatible here?

Nuance never suits jeremiads. Had Mitchell read the relevant liberal thought—names like Hayek and Kymlicka are conspicuous in absence—he’d see that his critique requires no revolution. He’d also spot the irony in the book’s title, since good traditions flourish best within the limits of liberal order.