←  PUBLICATIONS
POLICY REPORT
What Price War?
Afghanistan, Iraq, and the Costs of Conflict
May 31, 2011
By Anthony Gregory
PDF
24 pages, 2.5 MB 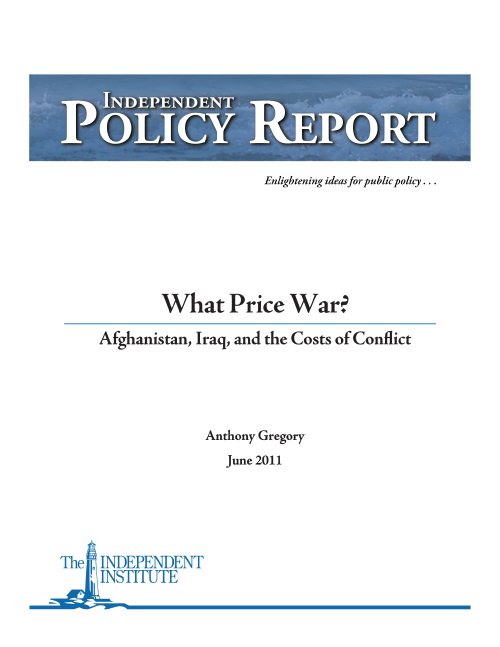 In the decade since 9/11, the U.S. government has pursued a national security policy that has been exceedingly costly in blood and treasure. Even before, U.S. defense spending was high by world standards, due in part to frequent interventions beyond the nation’s borders, and after 9/11 the spending and casualties have mounted precipitously.

There are no indications that our national security policies will change in the near future. Within a day of announcing that it found and killed al Qaeda head Osama bin Laden, the Obama administration maintained that the war on terrorism would continue. Moreover, both the U.S. government and al Qaeda have warned that Osama’s death could elicit retaliatory attacks by the terror network.

In any event, it appears that Osama’s death will not signal a rapid reduction of defense spending or an accelerated withdrawal of U.S. forces abroad. Although some of the government’s activities since 9/11 were useful in locating Osama, it appears that much of it had little to do with this narrow goal, the completion of which was relatively inexpensive and has so far not marked a major shift in policy. Should the administration decide to change course in the coming months, it is still important to look back at the last ten years and assess the costs of U.S. defense and foreign policy.

The wars in Afghanistan and Iraq have been the most expensive and deadly for the United States since the Cold War, and in particular since Vietnam. Many Americans saw this as a consequence of the particular policy approach taken by the George W. Bush administration, and many expected that the trajectory of U.S. foreign policy, especially in Iraq but also in general terms, would change incontrovertibly, if not completely, once Barack Obama became president and had time to implement his changes. Now, more than two years into Obama’s presidency, it is time to examine the new administration’s record in Iraq and Afghanistan and its general approach to foreign policy and the war on terrorism. In doing so, we should compare what has happened to what was promised, as well as to what was undertaken during the last administration.


Anthony Gregory is a former Research Fellow at the Independent Institute and author of American Surveillance.