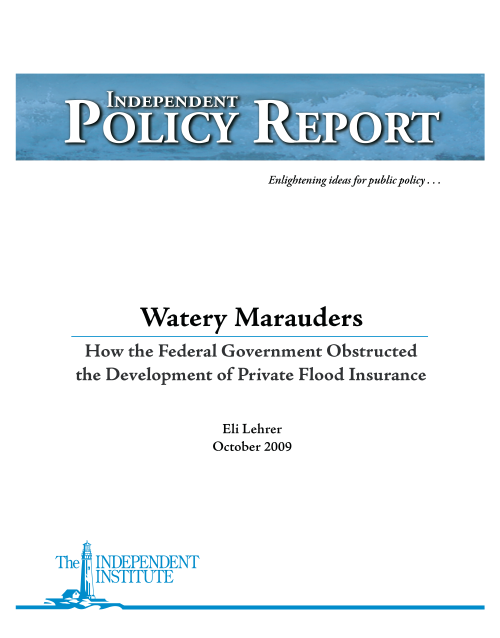 How did America’s National Flood Insurance Program came into existence and why didn’t private flood insurance develop in the United States on a significant scale?

The federal government built levees that altered America’s natural landscape and thus increased flooding, discouraged market entry by failing to repeal a calamitously impractical flood insurance law that was never implemented, supported mapping and zoning efforts that exacerbated flooding problems, and created a flood insurance program that priced policies well below market levels. Flood insurance exists as it does because political institutions sought to “correct” a perceived market failure and thereby made the emergence of private insurance unlikely, if not impossible.

Lehrer concludes: Flood insurance, in its current form, did not emerge as a result of market failure. Instead, the current situation represents an example of what economists call “government failure.”

Eli Lehrer is a Research Fellow at the Independent Institute and President of the R Street Institute.
EconomyEnergy and the EnvironmentEnvironmental Law and RegulationLand UseLaw and LibertyNatural ResourcesProperty Rights, Land Use, and Zoning