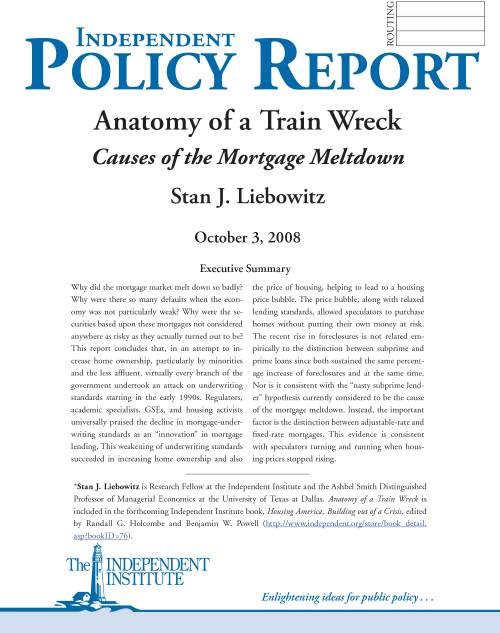 Why did the mortgage market melt down so badly? Why were there so many defaults when the economy was not particularly weak? Why were the securities based upon these mortgages not considered anywhere as risky as they actually turned out to be?

This report concludes that, in an attempt to increase home ownership, particularly by minorities and the less affluent, virtually every branch of the government undertook an attack on underwriting standards starting in the early 1990s. Regulators, academic specialists, GSEs, and housing activists universally praised the decline in mortgage-underwriting standards as an “innovation” in mortgage lending. This weakening of underwriting standards succeeded in increasing home ownership and also the price of housing, helping to lead to a housing price bubble. The price bubble, along with relaxed lending standards, allowed speculators to purchase homes without putting their own money at risk.

The recent rise in foreclosures is not related empirically to the distinction between subprime and prime loans since both sustained the same percentage increase of foreclosures and at the same time. Nor is it consistent with the “nasty subprime lender” hypothesis currently considered to be the cause of the mortgage meltdown. Instead, the important factor is the distinction between adjustable-rate and fixed-rate mortgages. This evidence is consistent with speculators turning and running when housing prices stopped rising.

Anatomy of a Train Wreck is included in the Independent Institute book, Housing America: Building Out of a Crisis, edited by Randall G. Holcombe and Benjamin Powell.

Stan J. Liebowitz is a Research Fellow at the Independent Institute and Professor of Economics at the University of Texas at Dallas.
Banking and FinanceBanking Law and RegulationEconomyHousing and HomelessnessLaw and Liberty

RELATED
The World Is Facing Its Day of Inflationary Reckoning
Fed Interest Hikes May End Up Having Unintended Consequences
Are Elon Musk and Jaime Dimon Crying Wolf about the Economy?
The Cultural Pessimism of 1619
Bernanke’s Prescription for Inflation—Give the Fed More Power