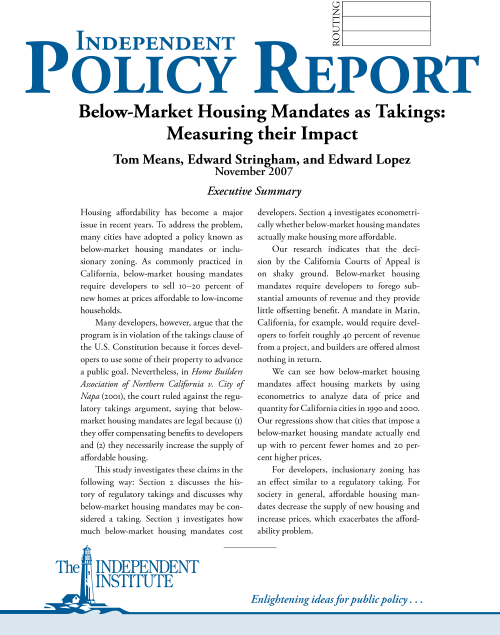 Housing affordability has become a major issue in recent years. To address the problem, many cities have adopted a policy known as below-market housing mandates or inclusionary zoning. As commonly practiced in California, below-market housing mandates require developers to sell 10–20 percent of new homes at prices affordable to low-income households.

Many developers, however, argue that the program is in violation of the takings clause of the U.S. Constitution because it forces developers to use some of their property to advance a public goal. Nevertheless, in Home Builders Association of Northern California v. City of Napa (2001), the court ruled against the regulatory takings argument, saying that belowmarket housing mandates are legal because (1) they offer compensating benefits to developers and (2) they necessarily increase the supply of affordable housing.

Our research indicates that the decision by the California Courts of Appeal is on shaky ground. Below-market housing mandates require developers to forgo substantial amounts of revenue and they provide little offsetting benefit. A mandate in Marin, California, for example, would require developers to forfeit roughly 40 percent of revenue from a project, and builders are offered almost nothing in return.

For developers, inclusionary zoning has an effect similar to a regulatory taking. For society in general, affordable housing mandates decrease the supply of new housing and increase prices, which exacerbates the affordability problem. 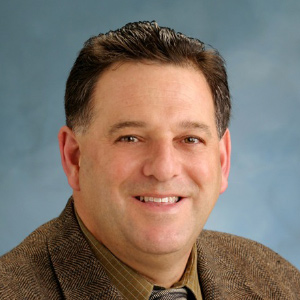 Thomas Means is a Research Fellow at the Independent Institute and Professor of Economics at San Jose State University.
EconomyHousing and HomelessnessLand UseLaw and LibertyProperty Rights, Land Use, and ZoningRegulation

RELATED
The Cost of San Francisco’s Reparations Proposal: Nearly $600,000 Per Household
Texas Conservatives Should Not Support Banning Land Sales to Foreigners
Reckless Reparations Reckoning
San Francisco Falls Into The Abyss
Does the U.S. Need to Contain China in Africa?