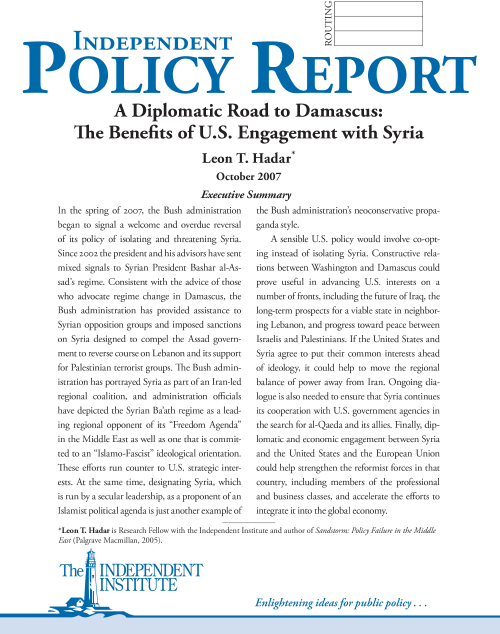 In the spring of 2007, the Bush administration began to signal a welcome and overdue reversal of its policy of isolating and threatening Syria. Since 2002 the president and his advisors have sent mixed signals to Syrian President Bashar al-Assad’s regime. Consistent with the advice of those who advocate regime change in Damascus, the Bush administration has provided assistance to Syrian opposition groups and imposed sanctions on Syria designed to compel the Assad government to reverse course on Lebanon and its support for Palestinian terrorist groups. The Bush administration has portrayed Syria as part of an Iran-led regional coalition, and administration officials have depicted the Syrian Ba’ath regime as a leading regional opponent of its “Freedom Agenda” in the Middle East as well as one that is committed to an “Islamo-Fascist” ideological orientation. These efforts run counter to U.S. strategic interests. At the same time, designating Syria, which is run by a secular leadership, as a proponent of an Islamist political agenda is just another exam ple of the Bush administration’s neoconservative propaganda style.

A sensible U.S. policy would involve co-opting instead of isolating Syria. Constructive relations between Washington and Damascus could prove useful in advancing U.S. interests on a number of fronts, including the future of Iraq, the long-term prospects for a viable state in neighboring Lebanon, and progress toward peace between Israelis and Palestinians. If the United States and Syria agree to put their common interests ahead of ideology, it could help to move the regional balance of power away from Iran. Ongoing dialogue is also needed to ensure that Syria continues its cooperation with U.S. government agencies in the search for al-Qaeda and its allies. Finally, diplomatic and economic engagement between Syria and the United States and the European Union could help strengthen the reformist forces in that country, including members of the professional and business classes, and accelerate the efforts to integrate it into the global economy.

RELATED
Does the U.S. Need to Contain China in Africa?
When Putin Turned His Back on Reaganomics
10 Steps to Save America: Yes, there is a way. But is there the will?
The Most Selfish Generation
If You Really Wanted to Destroy the United States, Then . . .