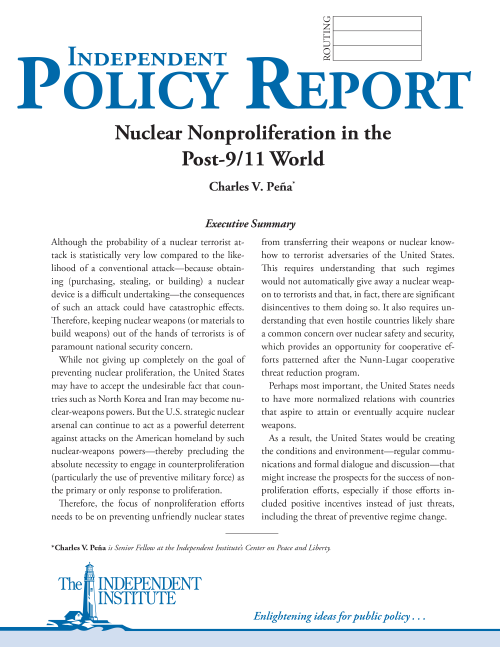 Although the probability of a nuclear terrorist attack is statistically very low compared to the likelihood of a conventional attack—because obtaining (purchasing, stealing, or building) a nuclear device is a difficult undertaking—the consequences of such an attack could have catastrophic effects. Therefore, keeping nuclear weapons (or materials to build weapons) out of the hands of terrorists is of paramount national security concern.

While not giving up completely on the goal of preventing nuclear proliferation, the United States may have to accept the undesirable fact that countries such as North Korea and Iran may become nuclear-weapons powers. But the U.S. strategic nuclear arsenal can continue to act as a powerful deterrent against attacks on the American homeland by such nuclear-weapons powers—thereby precluding the absolute necessity to engage in counterproliferation (particularly the use of preventive military force) as the primary or only response to proliferation.

Therefore, the focus of nonproliferation efforts needs to be on preventing unfriendly nuclear states from transferring their weapons or nuclear know-how to terrorist adversaries of the United States.

This requires understanding that such regimes would not automatically give away a nuclear weapon to terrorists and that, in fact, there are significant disincentives to them doing so. It also requires understanding that even hostile countries likely share a common concern over nuclear safety and security, which provides an opportunity for cooperative efforts patterned after the Nunn-Lugar cooperative threat reduction program.

Perhaps most important, the United States needs to have more normalized relations with countries that aspire to attain or eventually acquire nuclear weapons.

As a result, the United States would be creating the conditions and environment—regular communications and formal dialogue and discussion—that might increase the prospects for the success of nonproliferation efforts, especially if those efforts included positive incentives instead of just threats, including the threat of preventive regime change.

Charles V. Peña is a former Senior Fellow at the Independent Institute as well as a Senior Fellow with Defense Priorities and Coalition for a Realistic Foreign Policy.
AsiaDefense and Foreign PolicyEuropeInternational Economics and DevelopmentNorth Africa and The Middle EastTerrorism and Homeland Security

RELATED
Texas Conservatives Should Not Support Banning Land Sales to Foreigners
Reckless Reparations Reckoning
It’s Time to Put a Brake on the Debt-Ceiling Charade
The IMF and Sri Lanka Are Partners in Delusion
The Garage Papers: From Alger Hiss to Sandy Berger, Hillary Clinton and Joe Biden, it’s all about memory against forgetting.