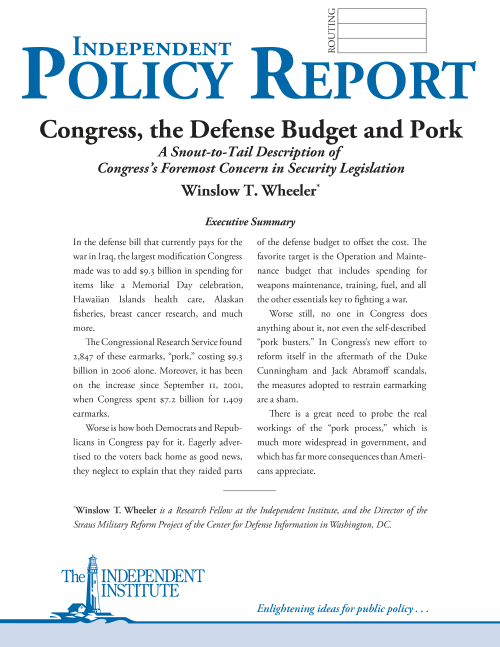 In the defense bill that currently pays for the war in Iraq, the largest modification Congress made was to add $9.4 billion in spending for items like a Memorial Day celebration, Hawaiian Islands health care, Alaskan ﬁsheries, breast cancer research, and much more.

Worse is how both Democrats and Republicans in Congress pay for it. Eagerly advertised to the voters back home as good news, they neglect to explain that they raided parts of the defense budget to offset the cost. The favorite target is the Operation and Maintenance budget that includes spending for weapons maintenance, training, fuel, and all the other essentials key to ﬁghting a war.

Worse still, no one in Congress does anything about it, not even the self-described “pork busters.” In Congress’s new effort to reform itself in the aftermath of the Duke Cunningham and Jack Abramoff scandals, the measures adopted to restrain earmarking are a sham.

There is a great need to probe the real workings of the “pork process,” which is much more widespread in government, and which has far more consequences than Americans appreciate.