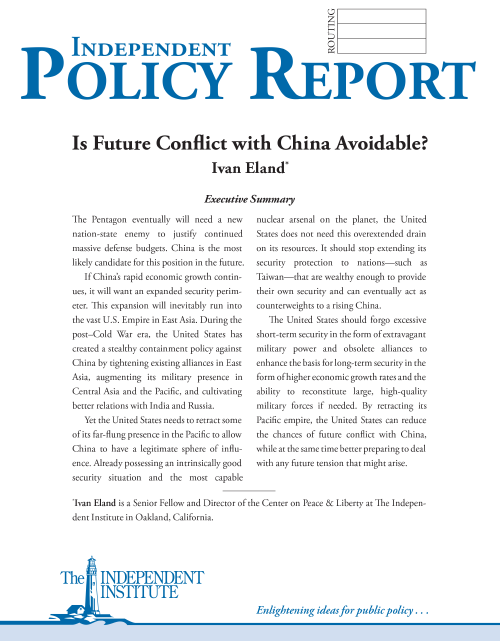 The Pentagon eventually will need a new nation-state enemy to justify continued massive defense budgets. China is the most likely candidate for this position in the future.

If China’s rapid economic growth continues, it will want an expanded security perimeter. This expansion will inevitably run into the vast U.S. Empire in East Asia. During the post–Cold War era, the United States has created a stealthy containment policy against China by tightening existing alliances in East Asia, augmenting its military presence in Central Asia and the Pacific, and cultivating better relations with India and Russia.

Yet the United States needs to retract some of its far-flung presence in the Pacific to allow China to have a legitimate sphere of influence. Already possessing an intrinsically good security situation and the most capable nuclear arsenal on the planet, the United States does not need this overextended drain on its resources. It should stop extending its security protection to nations—such as Taiwan—that are wealthy enough to provide their own security and can eventually act as counterweights to a rising China.

The United States should forgo excessive short-term security in the form of extravagant military power and obsolete alliances to enhance the basis for long-term security in the form of higher economic growth rates and the ability to reconstitute large, high-quality military forces if needed. By retracting its Pacific empire, the United States can reduce the chances of future conflict with China, while at the same time better preparing to deal with any future tension that might arise.