Synopsis | About the Authors 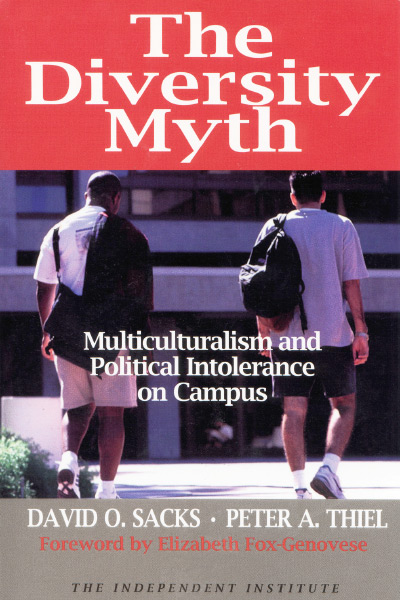 In the 1980s, Stanford University launched what its President Donald Kennedy described as a “great experiment” in “multiculturalism.” The experiment would transform campus life, leading to curricular innovation, new codes for student conduct, the celebration and institutionalization of “diversity,” changes in dorm life, even a refocusing of campus ministries. The Diversity Myth offers an insider’ s account of what multiculturalism has meant at a major university, and of what it will mean for America.

The Diversity Myth is divided into two parts. Part I, “The New Academy” (chapters 1-4) explores how multiculturalism has transformed the curriculum and extracurricular campus life. Part II, “The New Culture,” consisting of chapters 5-8, broadens the focus to consider multiculturalism as a social, political and cultural phenomenon.

Chapter 1, “The West Rejected,” opens with an account of Stanford’ s debate over Western Culture. Ostensibly, this debate centered on the merits of a core reading list for a series of required freshman courses, but it soon evolved into much more. With the notorious chant, “Hey hey, ho ho, Western Culture’ s got to go!”, Stanford’ s activists attacked the entire culture studied in that course—and demanded a drastic overhaul of the university’s mission.

By 1990, the Western Culture courses had been replaced by a series of new CIV (“Culture, Ideas and Values”) tracks. But it is highly debatable whether CIV actually increased the “diversity” of the curriculum: The course still primarily drew from Western culture, but its purpose had shifted to denouncing the West as racist, sexist, and classist. By eliminating the core reading list, some of Stanford’ s more radical professors effectively were given free rein to canonize their own ideological views.

Chapter 2, “Multiculturalism: A New Word for a New World,” describes how “multiculturalism” filled the vacuum created by the elimination of the West. What is “multiculturalism”? The term is used in several different and contradictory ways. On the one hand, “multiculturalism” is typically defined as a celebration of diversity or as cultural relativism—the belief that no culture may use its standards to judge another. But these explanations are incomplete: Not all kinds of diversity are celebrated, and the relativist rhetoric is never applied to the condemned West. Multiculturalism is also guided by a narrower, though less often articulated, set of values and judgments.

At Stanford, the values that inform multiculturalism are those of 1960s activists, who use the ideological biases of that era to calibrate and evaluate cultural differences. Typically, for example, racial differences are given great cultural importance, while religious differences are completely ignored. But the consequences of multiculturalism is more (or perhaps less) than left-liberalism: In practice, the new multicultural community simply has resulted in the most stifling conformity imaginable—and this is what is so transparently at odds with all the rhetoric about “diversity.”

Chapter 3, “Educating Generation X,” explores what the new multicultural curriculum has meant in areas beyond Western Culture. The loss of objective academic standards has had a number of serious consequences. Grade inflation is rampant and a number of classes are primarily therapeutic, designed to boost students’ “self-esteem.” For other instructors, trendiness has become the guiding principle, with classes studying popular TV shows, rock groups, or cartoon strips. In other contexts, the ideological components of multiculturalism predominate, as instructors focus on social victims and radical political activism.

But when everything is equally important, then nothing really matters. The cumulative effect of all these ephemeral studies is that the curricula are ultimately empty. The real danger is not that students will become left-wing disciples of multiculturalism, but that they will become disenchanted with learning altogether. The nihilism and apathy of Generation X are not that surprising, when one considers the vacuity of much of what they have been offered.

Chapter 4, “The Engineering of Souls,” moves beyond the classroom to consider the extracurricular components of multiculturalism -- how it has been implemented in dorm life, in conduct rules, and other university programs. Two contradictory themes soon emerge. On the one hand, there is a “theology of liberation” as the university encourages freedom from traditional Western morality -- a bias in favor of sexual exploration, a bias against the Judeo-Christian tradition. On the other hand, however, there is a “new Puritanism,” with the campus hysteria over date rape -- a phenomenon that has been greatly exaggerated -- leading to more unjustified restrictions of student liberties. Perhaps the best way of reconciling these two disparate themes is to recognize that, broadly defined, both involve the same anti-Western animus that drove Stanford’ s curriculum revisions.

Chapter 5, “Stages of Oppression,” looks in some depth at the claims of oppression that are so central to multiculturalism. The multicultural community postulates differences between groups and similarities within groups -- so that members of minorities (racial, sexual, etc.) -- are all different from the majority in exactly the same way. This sort of “diversity” ignores the enormous diversity of individuals.

More specifically, the differences between minorities and majorities are conceived in terms of the oppression of the former by the latter. Minorities are all alike, according to multiculturalists, because they share a culture of being oppressed. Thus, racial identity is conceived in relation to “institutional racism,” gender identity in relation to “sexism,” and gay and lesbian identity in relation to “homophobia.” One of the interesting -- and problematic -- corollaries of the culture of victimization is that, if the oppressions ever ended, then the specific minority identities would also disappear. Multiculturalism would cease to exist.

Chapter 6, “Welcome to Salem,” considers another dimension of the oppressed identities. An identity of victimization is not a Platonic essence, standing on its own; it is relational. For every victim, there must be a victimizer. And therefore the culture of multiculturalism (the “multiculture”) must, in order to reaffirm victimized identities, hunt down and eliminate its oppressors. This elimination of oppression does not occur once and for all, but must be periodically reenacted, to reinforce victimized identities that are threatened with dissipation over time.

It is in this context that one should understand the witch hunts against people who are “politically incorrect.” These witch hunts are not an incidental, but a necessary, component of the multiculture. Although conservative students and faculty, and white males more generally, are frequent targets, they are not the only ones. Multiculturalism also goes after people who would seem to be natural allies. Liberals who do not toe the party line in particular contexts, and minority students who do not agree with all multicultural claims, can become “victims” of multiculturalism. The multiculture must have enemies to denounce, and sometimes even very implausible one will do.

Chapter 7, “The Egalitarian Elite,” describes how the multicultural experiment gradually came to an end at Stanford. It did not end from the inside, as all checks and balances (not to mention objective standards) had been gradually eroded. But the end came from the outside, in the form of a debate over indirect costs and federal subsidization of research at Stanford University. Many of these indirect costs had been used to pay for Stanford’s multicultural experiment; as government auditors uncovered a pattern of waste and abuse, they started to cut funding and the cultural revolution on campus showed to a halt.

One of the remarkable features of the cuts in indirect costs involved the arrogant attitude of Stanford’s educational leaders. They could not believe that they had done anything wrong and they could not tolerate the idea that others might be able to review their activities. Plato’s paradoxical question—“and who will guard the guardians?”—may not be as outdated as some believe.

Chapter 8, “Caliban’s Kingdom,” concludes with some thoughts on the aftermath of multiculturalism at Stanford, and the prospects for America. Multiculturalism has failed on campus, but it is unclear whether Stanford can go back to the past—a great deal of damage has been done by the multicultural bulldozer, and it may take many years to undo the legacy. For America, the warning seems equally clear: the multicultural “culture of complaint” will result in a “culture of blame.” As people turn on one another, real solutions to problems will recede further and further away.

It is not clear there is a political or cultural solution to the multicultural crisis. Perhaps the most promising avenues lie outside the politico-cultural realm, and will start on an individual, rather than a collective level. Individuals will have to decide—on their own, with help from no one else—to forsake the ethos of resentment and anger that is so central to the multiculture. Only then will the curtain fall on the multicultural theater of “diversity,” in which the many actors play carefully assigned roles but rarely are able to say or do what they think is right.