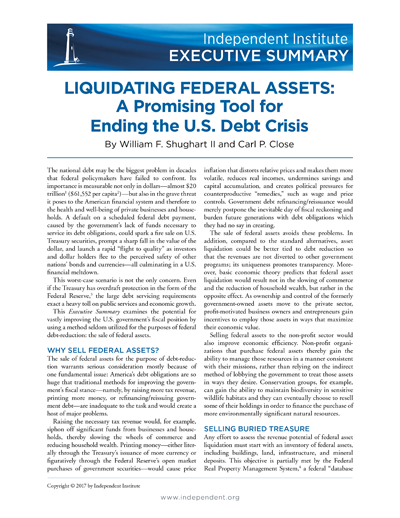 The national debt may be the biggest problem in decades that federal policymakers have failed to confront. Its importance is measurable not only in dollars—almost $20 trillion[1] ($61,552 per capita[2])—but also in the grave threat it poses to the American financial system and therefore to the health and well-being of private businesses and households. A default on a scheduled federal debt payment, caused by the government’s lack of funds necessary to service its debt obligations, could spark a fire sale on U.S. Treasury securities, prompt a sharp fall in the value of the dollar, and launch a rapid “flight to quality” as investors and dollar holders flee to the perceived safety of other nations’ bonds and currencies—all culminating in a U.S. financial meltdown.

This worst-case scenario is not the only concern. Even if the Treasury has overdraft protection in the form of the Federal Reserve,[3] the large debt servicing requirements exact a heavy toll on public services and economic growth.

This examines the potential for vastly improving the U.S. government’s fiscal position by using a method seldom utilized for the purposes of federal debt-reduction: the sale of federal assets.

The sale of federal assets for the purpose of debt-reduction warrants serious consideration mostly because of one fundamental issue: America’s debt obligations are so huge that traditional methods for improving the government’s fiscal stance—namely, by raising more tax revenue, printing more money, or refinancing/reissuing government debt—are inadequate to the task and would create a host of major problems.

Raising the necessary tax revenue would, for example, siphon off significant funds from businesses and households, thereby slowing the wheels of commerce and reducing household wealth. Printing money—either literally through the Treasury’s issuance of more currency or figuratively through the Federal Reserve’s open market purchases of government securities—would cause price inflation that distorts relative prices and makes them more volatile, reduces real incomes, undermines savings and capital accumulation, and creates political pressures for counterproductive “remedies,” such as wage and price controls. Government debt refinancing/reissuance would merely postpone the inevitable day of fiscal reckoning and burden future generations with debt obligations which they had no say in creating.

The sale of federal assets avoids these problems. In addition, compared to the standard alternatives, asset liquidation could be better tied to debt reduction so that the revenues are not diverted to other government programs; its uniqueness promotes transparency. Moreover, basic economic theory predicts that federal asset liquidation would result not in the slowing of commerce and the reduction of household wealth, but rather in the opposite effect. As ownership and control of the formerly government-owned assets move to the private sector, profit-motivated business owners and entrepreneurs gain incentives to employ those assets in ways that maximize their economic value.

Selling federal assets to the non-profit sector would also improve economic efficiency. Non-profit organizations that purchase federal assets thereby gain the ability to manage those resources in a manner consistent with their missions, rather than relying on the indirect method of lobbying the government to treat those assets in ways they desire. Conservation groups, for example, can gain the ability to maintain biodiversity in sensitive wildlife habitats and they can eventually choose to resell some of their holdings in order to finance the purchase of more environmentally significant natural resources.

Any effort to assess the revenue potential of federal asset liquidation must start with an inventory of federal assets, including buildings, land, infrastructure, and mineral deposits. This objective is partially met by the Federal Real Property Management System,[4] a federal “database of all real property under the custody and control of all executive branch agencies” (excluding national forests, parks, wildlife refuges, and property deemed sensitive for reasons of national security).

According to its FY 2015 Summary of Findings, federal holdings amounted to 340,353 buildings and 49.7 million acres of land, including federal properties on foreign lands.[5] A more inclusive study by the Congressional Research Service (2014) estimates that federal land holdings total 640 million acres.[6] This sum, however, omits the 1.76 billion acres of federally owned portions of the Outer Continental Shelf.

The Federal Real Property Council in 2006 appraised the value of federal land, buildings, and infrastructure at $1.3 trillion.[7] As large as this estimate is, one class of assets not included in that inventory would likely bring in far more revenue: deposits of oil, natural gas, and coal on federal property, onshore and offshore. This includes technically recoverable resources totaling 1,194 billion barrels of oil and 2,150 trillion cubic feet of natural gas.[8] Estimated recoverable coal reserves on federal lands total 7.4 billion tons.[9] The considerable cost of developing these reserves must also be factored in. Assuming that energy developers bid one-third to one-half the current market prices of these commodities, total revenues would amount to $23.3 trillion to $35 trillion, compared to today’s U.S. debt of $20 trillion.[10]

Any estimate of revenues from federal asset liquidation is, of course, fraught with uncertainties. Variables subject to change include prices, costs, technology, consumer demand, and discount rates. Moreover, a large and rapid sell-off would significantly affect asset values. Despite these caveats, estimates can be helpful guides to policymakers as they compare asset liquidation to policy alternatives that come with their own uncertainties.

Whatever the precise value that the marketplace would set for access (or exploration) rights, it is clear that selling them would reap ample rewards for debt reduction, probably more than all other asset classes combined. Debt hawks would therefore be wise to keep their eyes on this prize.

The Road to Federal Solvency

Politics is about building effective coalitions. Can a coalition form to successfully campaign for federal asset liquidation? Grounds for optimism come from an existing federal asset program. Title V of the McKinney-Vento Homeless Assistance Act, signed into law by President Ronald Reagan in 1987, gave homeless-assistance organizations the right of first refusal to acquire federal properties. By giving them a stake in the sale of federal assets, Title V encouraged advocates for the homeless to support passage of the Federal Asset Sale and Transfer Act nearly 30 years later.[11]

The law, signed by President Barack Obama in December 2016, is expected to raise at least $8 billion, exclusively for debt reduction, through the sale of unneeded, underutilized surplus federal buildings and associated real estate.[12] Although this sum would barely put a dent in a $20 trillion national debt, it takes an essential step: it provides proof of concept. Just as homeless groups had material reasons to support the 2016 asset liquidation law, a broader coalition of interest groups could be formed and incentivized to support a bold initiative to sell a much larger portfolio of federal assets, including the rights to most oil, natural gas, and coal deposits on federal lands.

The road to national solvency is paved with sales receipts from the U.S. government’s vast property holdings, particularly its untapped treasure trove of energy deposits. The time has come to take that road and enlist others for the journey.

The public debt clock is ticking. Let’s get started.

Carl P. Close is a former Research Fellow and former Executive Editor for Acquisitions and Content at the Independent Institute.
EconomyEnergy and the EnvironmentFiscal Policy/DebtLaw and LibertyNatural ResourcesProperty Rights, Land Use, and ZoningRegulation

RELATED
The States that Are Falling Behind in Economic Freedom
Paul Volcker’s Recipe for Prosperity
Ownership, Control, and Reform: Market-Based Approaches to Universities
Concentrate Where the Murders Are Concentrated
The Cost of San Francisco’s Reparations Proposal: Nearly $600,000 Per Household
What the Populists in Congress Get Right and Get Wrong
Debt Ceiling Kabuki: Republicans Will Cave and U.S. Government Finances Will Get Even Worse
Texas Conservatives Should Not Support Banning Land Sales to Foreigners
San Francisco Falls Into The Abyss
It’s Time to Put a Brake on the Debt-Ceiling Charade
The IMF and Sri Lanka Are Partners in Delusion
Does the U.S. Need to Contain China in Africa?