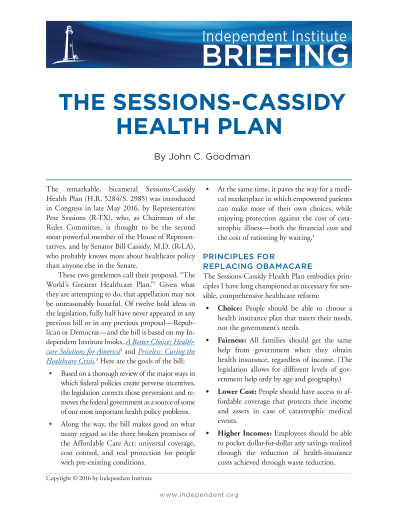 The remarkable, bicameral Sessions-Cassidy Health Plan (H.R. 5284/S. 2985) was introduced in Congress in late May 2016, by Representative Pete Sessions (R-TX), who, as Chairman of the Rules Committee, is thought to be the second most powerful member of the House of Representatives, and by Senator Bill Cassidy, M.D. (R-LA), who probably knows more about healthcare policy than anyone else in the Senate.

These two gentlemen call their proposal, “The World’s Greatest Healthcare Plan.” Given what they are attempting to do, that appellation may not be unreasonably boastful. Of twelve bold ideas in the legislation, fully half have never appeared in any previous bill or in any previous proposal—Republican or Democrat—and the bill is based on my Independent Institute books, A Better Choice: Healthcare Solutions for America and Priceless: Curing the Healthcare Crisis.

Here are the goals of the bill:

RELATED
The Pitfalls of Law Enforcement License Plate Readers in California and Safeguards to Protect the Public
Crime, Grime, and Greed at BART
Health Care Components of the $3.5 Trillion (Or, Is It $5.5 Trillion?) Spending Plan
COVID in California: How Government Regulations Created Critical Healthcare Shortages — Permanent Patient-Centered Reforms Needed
Bugs in the System: California Government Technology Failures and Recommended Solutions