The proposed draft for the California Mathematics Framework (CMF) promotes the idea that, in general, students should not be accelerated based on their actual performance in math. The draft declares that it “reject[s] ideas of natural gifts and talents (p. 8),” argues that ideas such as giftedness “have led to considerable inequities in mathematics education (p. 9),” and that promoting accelerated instruction and associated labeling of giftedness lead to “fragility among students, who fear times of struggle in case they lose the label (p. 15).” The research support for this argument is very weak so to bolster it, the draft of CMF uses the case study of San Francisco Unified District (SFUSD) that implemented an essentially uniform assignment of math courses to all its students since 2015 and claims an improvement in overall math achievement.

In school year (SY) 2014–15 SFUSD replaced its previous policy of encouraging students to take Algebra 1 in grade 8 by a new policy forcing all grade 8 students (with just a handful of exceptions) to take its “Math 8” program in grade 8, and defer Algebra 1 for all students to grade 9. It also encourages the majority of students to take Geometry and Algebra 2 in grades 10–11, leaving them only the choice of Precalculus and AP Statistics for their senior year. Students who insist on being able to take AP Calculus in grade 12 can optionally take a “compressed” course of Algebra 2 and Precalculus in grade 11 allowing them the option of taking AP Statistics or AP Calculus in their senior year.

This sounds impressive, yet repeat-rate is subjective. SFUSD data (App. B, yellow) shows that 649 cohort 0 students repeated Algebra 1 in grade 9, implying that out of some 700 students with grades of C and below [C(370), D(229), F(100)], almost all were requested to re-take the class. In contrast, from almost 1,000 cohort 1 students scoring C and below a year later (App. B, pink) [C(547), D(239), F(195)], only 18 students were required to re-take Algebra 1. In other words, the pass/fail criteria seem to have been lowered drastically for the cohort 1 students, making claims of success based on repeat-rate questionable. Further, when one looks at the grade distribution of those two cohorts, one notices that cohort 0 (graduating in SY 2017–18) had a total of 2,537 students getting A or B in Algebra 1 over time, while the following cohort 1 (under the new program) had only 2,042 students getting A or B—a large 20% decline of meaningful success in that course.

But the proof of the pudding is not in Algebra 1 success, but in success on more advanced math courses. SFUSD does not provide grade distribution over time for higher level courses, and offers just numbers about course-takers, without breaking out the course grades, so we cannot make any definitive statement on those. Yet some hints are available from what SFUSD does provide.

Advanced Placement (AP) math course enrollment in SFUSD has stayed mostly constant, at 1,600–1,700 tests taken every year. Yet prior to the new program AP Calculus made about 70% of the tests taken with the other ~30% being AP Statistics, but under the new program the AP Calculus enrollment dropped to less than 60% while AP Statistics rose to over 40%. SFUSD administrators will tell you that “statistics today is more important than calculus” yet that is not what professors at leading colleges and STEM faculties are saying. AP Calculus is more demanding, as can be clearly seen from SFUSD’s own math “pathways” that allow taking AP Statistics under its regular pathway, but doesn’t allow for AP Calculus unless one takes a compressed (accelerated) pathway.

In other words, since the program change more students take the easier statistics and fewer take the more demanding calculus as their culminating high school math course. SFUSD does not provide a breakdown of student score on the AP exams so it is impossible to judge whether the scores on them have improved or deteriorated since the program change.

Finally, the only objective measure we have of the SFUSD new math program boils down to the state-wide Smarter Balanced Assessment Consortium (SBAC) testing. Grade 3–8 SBAC tests do not include any significant algebra, so the only real way to assess SFUSD success is the 11th grade math test (which is not very demanding to begin with). Here the story is telling.

The first cohort under the new program hit grade 11 in 2017–18 school year. Looking at the fraction of successful students, those scoring proficient or above (P&A), the high watermark of SFUSD in 2016–17 (the last year before the change) for P&A “all students” dropped by about 5% two years later (App. A, chart 1). Even worse, the English Language Learners are harmed particularly punitively by the heavy language-based math that SFUSD is promoting (App. A, chart 3) and their P&A dropped by almost half from 29% to 17%. Low socio-economic status (SES) P&A students dropped by 5 points from 54% to 49%. Hispanic P&A dropped by 3 points, white P&A dropped by 8 points, Asian P&A dropped by 2 points. Only the fraction of African-American P&A students increased, from 10% to 12% (App. A, charts 2 & 4). Incidentally, the whole-state performance at the same period was generally stable and even increased slightly, as the charts in Appendix A attest.

In summary, the claims of success based on reduced Algebra 1 repeat-rate do not survive scrutiny and are the result of changing passing criteria, likely driven by the wish for the new program to look successful, rather than on any actual student success. Yet even if such a miraculous improvement were true, it would mean little since it certainly did not translate into actual performance improvement in higher level mathematics. All SFUSD reported as “success” was prior to the first students under the new program reaching their senior year, and did not include their actual performance on objective/external assessment beyond reporting enrollment.

The scant actual performance data available shows general decline in math performance in SFUSD since the initiation of the changes, with ELL students particularly heavily impacted. 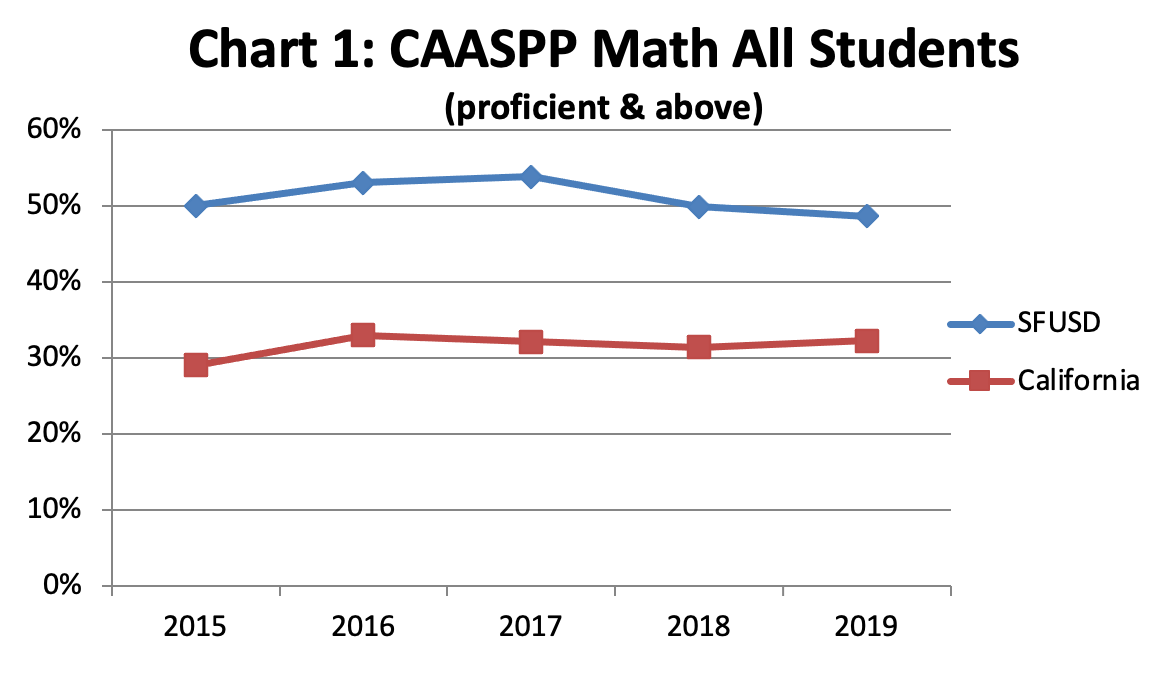 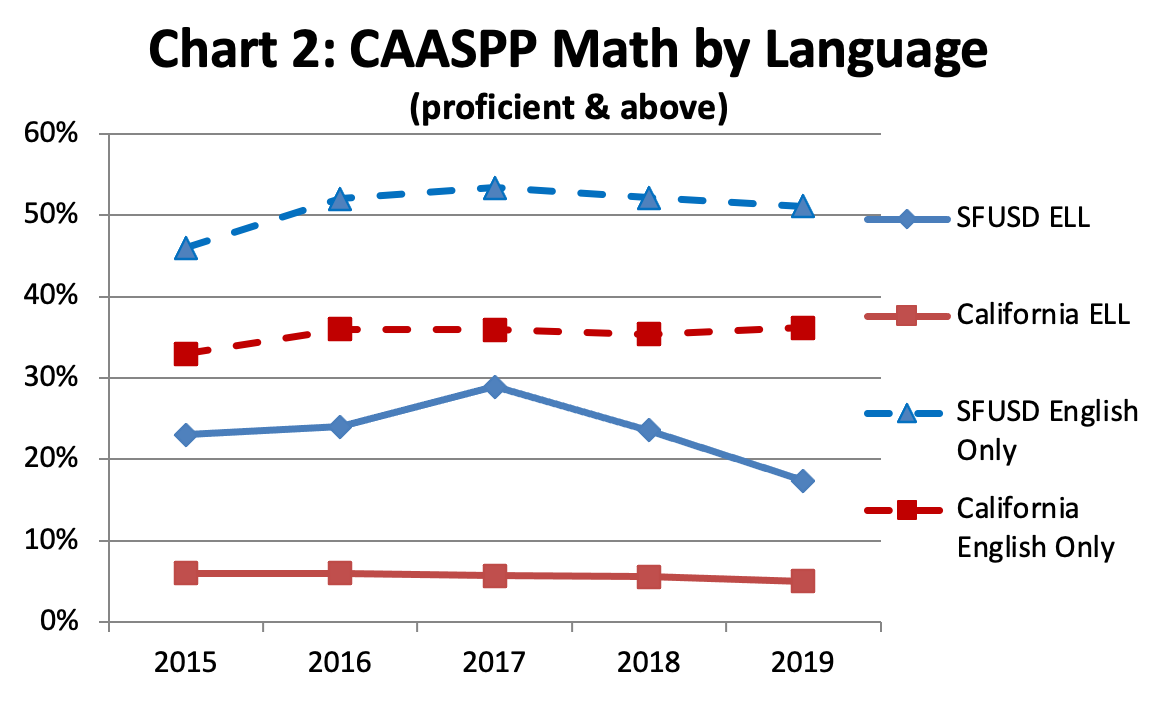 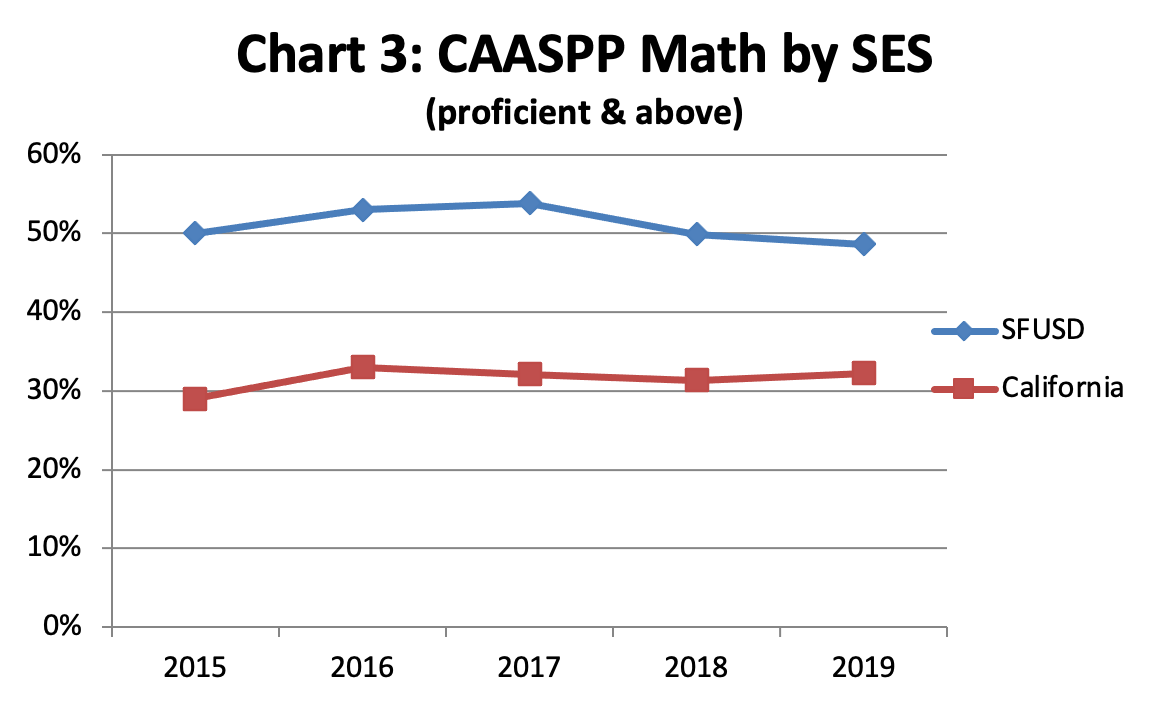 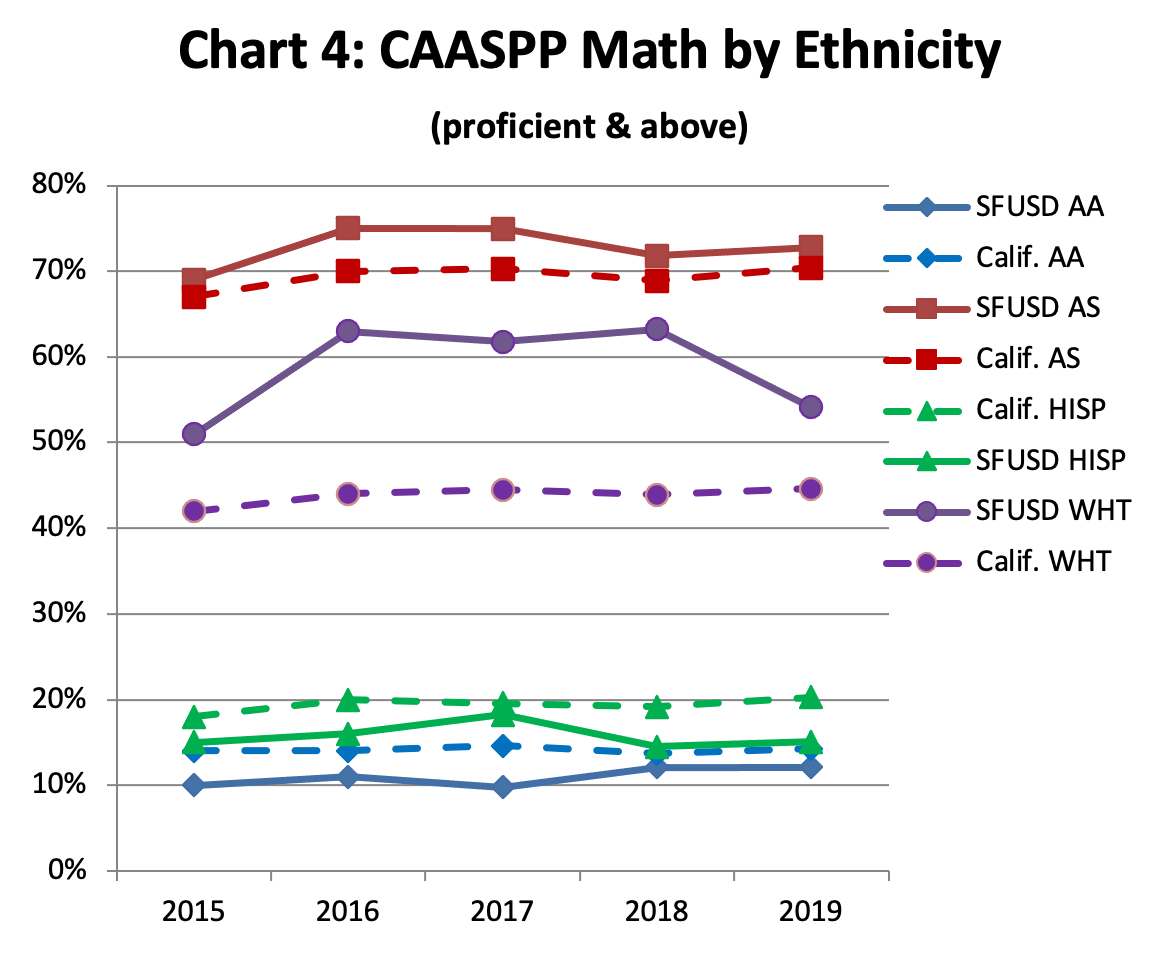 Appendix B: SFUSD-provided Data on Algebra 1 Enrollment During Policy-Changing Period 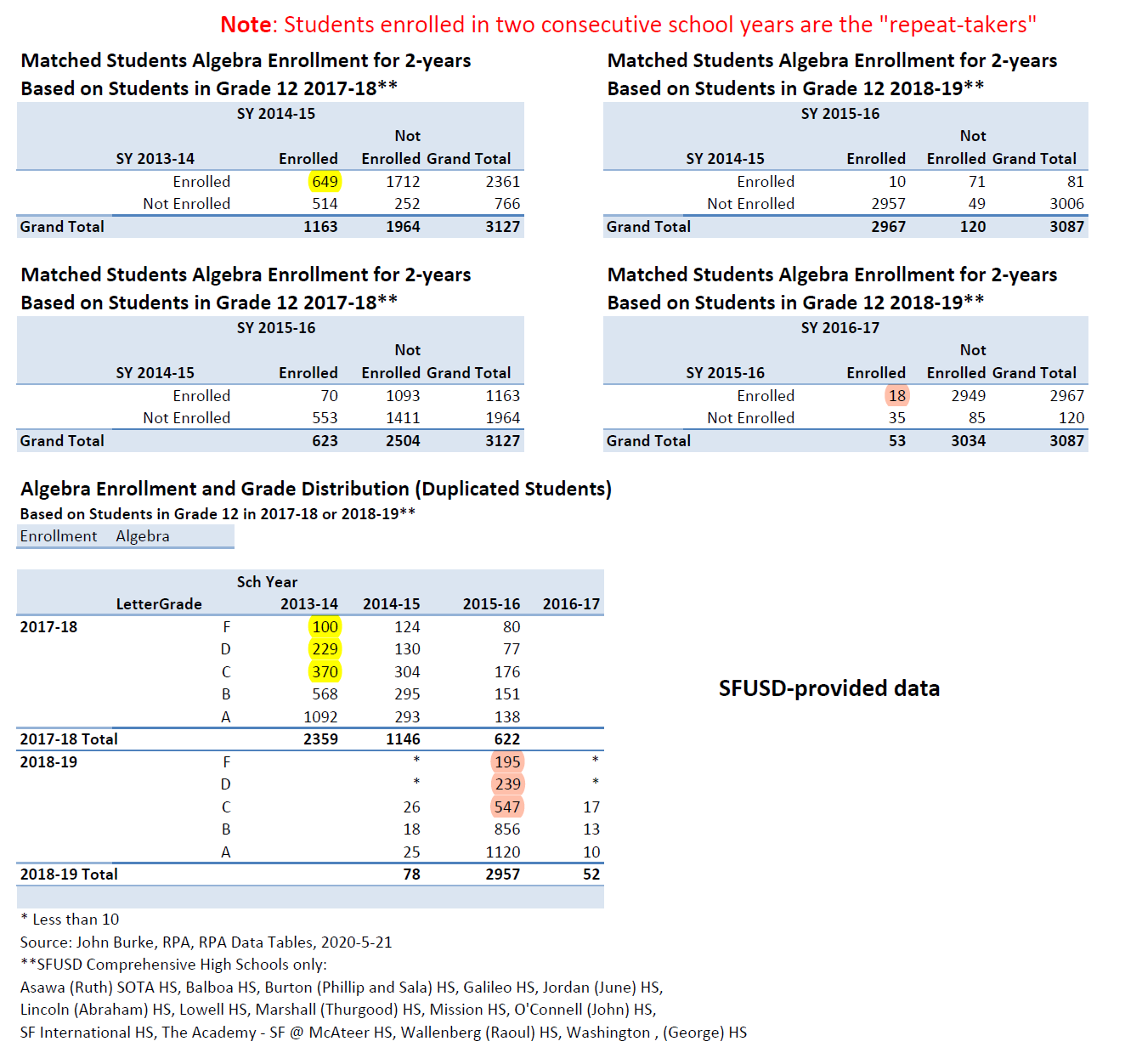 Ze'ev Wurman is a Research Fellow at the Independent Institute, co-author of the Open Letter to Replace the Proposed New California Math Curriculum Framework, Chief Software Architect with MonolithIC 3D Inc., and former senior policy adviser with the Office of Planning, Evaluation and Policy Development at the U.S. Department of Education.