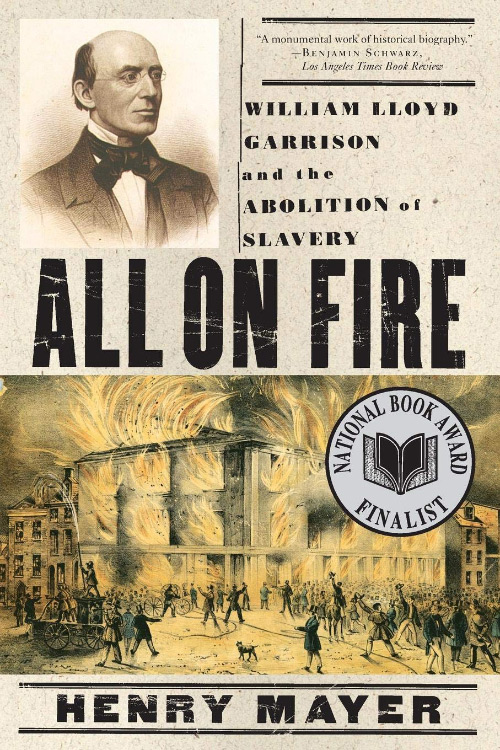 All on Fire
William Lloyd Garrison and the Abolition of Slavery
Henry Mayer
Hardcover Paperback
This book review appeared in the Fall 2000 issue of The Independent Review.

No one attacked the black slavery of the southern states with greater vehemence than a group of young, radical abolitionists who burst upon the American landscape in the early 1830s. Exasperated at the betrayal of the revolutionary promise that all forms of human bondage would disappear in this new land of liberty, and marshaling all the evangelical fervor of the religious revivals then sweeping the country, they demanded no less than the immediate emancipation of all slaves. They not only opposed any compensation of slaveholders and any colonization of freed slaves outside the country, but they also demanded full political rights for all blacks, North and South.

The most prominent and vitriolic of those abolitionists was William Lloyd Garrison. The son of a drunken sailor who had abandoned his family, Garrison grew up in a poor but piously Baptist household in Newburyport, Massachusetts. He served as a printer’s apprentice and then made his first notable mark on antislavery activism when he went to jail rather than pay a fine for libeling as a “highway robber and murderer” a New England merchant who shipped slaves between Baltimore and New Orleans. From Boston on January 1, 1831, the near-sighted, prematurely balding, twenty-five-year-old editor brought out the first issue of a new weekly paper, The Liberator. Garrison left no doubt about his refusal to compromise with the sin of slavery:

I will be as harsh as truth, and as uncompromising as justice. On this subject, I do not wish to think, or speak, or write with moderation. No! No! Tell a man whose house is on fire, to give a moderate alarm: tell him to moderately rescue his wife from the hands of the ravisher; tell the mother to gradually extricate her babe from the fire into which it has fallen;—but urge me not to use moderation in a cause like the present. I am in earnest—I will not equivocate—I will not excuse—I will not retreat a single inch—and i will be heard. (The Liberator, January 1, 1831)

Garrison conceded that the actual elimination of slavery would take time but that concession should not inhibit forthright condemnation of moral evil. “Urge immediate abolition as earnestly as we may, it will alas! be gradual abolition in the end. We have never said that slavery would be overthrown by a single blow; that it ought to be we shall always contend” (The Liberator, August 13, 1831).

The crusading editor did not look to direct political action to eradicate slavery. Moral suasion and nonviolent resistance were his strategies. With agitation, he hoped at first to shame slaveholders into repentance. By early 1842, Garrison had gone so far as to denounce the U.S. Constitution for its proslavery clauses as “a covenant with death and an agreement with hell.” He publicly burned a copy during one Fourth of July celebration, proclaiming: “So perish all compromises with tyranny!” He now believed that the North should secede from the United States. The slogan “No Union with Slave-Holders” appeared on the masthead of Garrison’s Liberator for years. The paper would continue to appear every week, without interruption—despite recurrent financial straits, antagonism from respectable leaders throughout the North, and even an enraged mob that almost lynched its editor—until the ratification of the Thirteenth Amendment abolished slavery thirty-five years after the founding of the paper.

Unfortunately, Garrison has not been adequately served by previous biographers. The all too common inclination has been to portray him as an intolerant zealot whose actual activities were far less constructive than those of other, more conservative but less-visible opponents of slavery. This interpretation dates back to Gilbert H. Barnes’s general history of abolitionism, The Antislavery Impulse, 1830-1844 (New York: American Historical Association, 1933), and it tainted the subsequent works of Louis Filler, The Crusade Against Slavery, 1830-1860 (New York: Harper and Row, 1960), and Dwight Lowell Dumond, Antislavery: The Crusade for Freedom in America (Ann Arbor: University of Michigan Press, 1966). Walter Merrill’s full-length biography, Against Wind and Tide: A Biography of Wm. Lloyd Garrison (Cambridge, Mass.: Harvard University Press, 1963), at least is not hostile toward its subject, as is John L. Thomas in The Liberator, William Lloyd Garrison: A Biography (Boston: Little, Brown, 1963). James Brewer Stewart’s more recent short study, William Lloyd Garrison and the Challenge of Emancipation (Arlington Heights, Ill.: Harlan Davidson, 1992), shows an appreciation of Garrison’s importance but descends into excessive and patronizing psychologizing.

One contribution to our understanding of abolitionism that cannot be praised too highly is Aileen S. Kraditor’s Means and Ends in American Abolitionism: Garrison and His Critics on Strategy and Tactics, 1834-1850 (New York: Random House, 1969). Kraditor reestablishes Garrison’s centrality and in the process shows that the Garrisonians were often more tolerant and less sectarian than conservative opponents in their willingness to welcome all factions within the abolitionist fold. Another seminal work that looks into Garrison’s anarchism and nonresistance is Lewis Perry’s Radical Abolitionism: Anarchy and the Government of God in Antislavery Thought (Ithaca: Cornell University Press, 1973). And Carleton Mabee, Black Freedom: The Nonviolent Abolitionists from 1830 Through the Civil War (New York: Macmillan, 1970), provides a sensitive treatment of abolitionist tactics. Yet none of these works is a complete study of William Lloyd Garrison’s life.

Now, at last, the radical, courageous, and pioneering opponent of chattel slavery has a biography worthy of him. Henry Mayer, the author of A Son of Thunder: Patrick Henry and the American Republic (New York: Franklin Watts, 1986), probably the best study of Patrick Henry, has outdone himself with this latest book. It is rare for an author to deal with the various aspects of an intellectual figure with equal facility. Often one ends up with a disembodied and lifeless treatment of the subject’s ideas or, at the other extreme, a detailed personal history that skims over intellectual intricacies inadequately or superficially. Mayer masterfully and seamlessly integrates all the dimensions of Garrison’s life. Indeed, the author’s eye for detail, from the drudge tasks of an apprentice printer to the warm family life of a prominent agitator, makes this book one of the most realistic, authentic biographies I have ever had the pleasure to read. You feel that you know Garrison intimately through every challenge in his amazing career, despite his inhabiting an era when people’s religious commitments were so encompassing as to be utterly alien to our modern, secular culture.

At the same time, Mayer does justice to all of Garrison’s most radical stances, as the crusading editor went through schism after schism within the abolitionist movement. His advocacy of disunion and denunciation of the Constitution, his opposition to voting and to political parties, his anarchism and pacifism, his early and hearty support for women’s rights, and his disillusionment with and rejection of organized churches—all receive a sensitive, insightful exposition. Without ever oversimplifying, Mayer gives these intellectual conflicts such drama that the book propels the reader effortlessly through its nearly seven hundred pages and in the process provides one of the best overall narrative histories of abolitionism. In the end, Mayer makes a strong case that without Garrison’s inflammatory but compelling writing, speaking, and organizing, there might have been no effective abolitionist movement at all.

Garrison’s life has exceptional relevance for those interested in the cause of liberty. The abolition of chattel slavery stands as the most impressive and enduring triumph of classical liberalism. In today’s world, the practice may persist clandestinely, but no dictator or ruler, no matter how vile or ruthless, would dare to publicly endorse owning another human being. In little more than a century, the international abolitionist movement eliminated a labor system that had been universal on every continent and in every civilization, even though the abolitionists were a small minority and always divided into numerous, acrimonious factions. Because The Liberator was at the center of all those strategic debates, the example of William Lloyd Garrison has much to teach us.

All on Fire is not without flaws. When discussing the views of individuals other than Garrison, especially politicians, Mayer is sometimes unfair and even lapses into occasional error. (The Liberty Party, for instance, never took the Stewart-Goodell-Spooner position that the central government could or should prohibit slavery within individual states, as Mayer implies.) And when the prospect of finally ridding the country of human bondage during the Civil War seduced Garrison into compromising his nonresistance and supporting Lincoln and the Republican Party, Mayer is too sympathetic. But better a biography that is overly sympathetic than all the harsh denunciations of wild-eyed fanaticism that have characterized past accounts of Garrison’s life. Mayer’s flaws are so trivial that they hardly dim the luster of this truly inspiring work.

Addendum: After the preceding book review was written but before it went to press, we received the sad news that Henry Mayer passed away on July 24, 2000, of a heart attack, at the age of 59. He was in the midst of researching a third biography—on the photographer Dorothea Lang.