One month ago, I noted that the market was pricing a very high risk premium into two of three take-overs among health insurers. In a volatile stock market, the merger-arbitrage spreads for the three deals currently in play are remarkably stable. Anthem’s take-over of Cigna and Aetna’s take-over of Humana continue to be viewed as highly risky, while Centene’s take-over of HealthNet is viewed as almost certain to take place as announced.

Chart I shows the expected rates of return for investors shorting the spread of these three mergers, as they have evolved from the shares’ closing prices on June 24 (the date Anthem’s bid for Cigna turned from hostile to friendly) to yesterday. Each rate of return assumes it will take until the third quarter of 2016 for each deal to close. 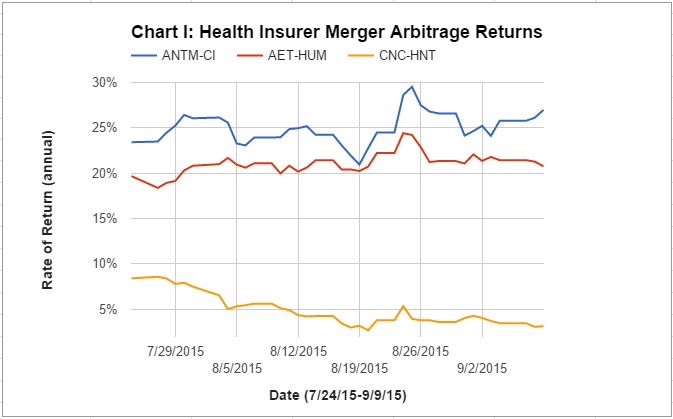 Investors buying shares in HealthNet to deliver in exchange for cash and Centene shares appear confident that this deal will close, demanding a return of only 3 percent. This is understandable because HealthNet is geographically concentrated in California, Arizona, and the Pacific Northwest, operating in all market segments. Centene, on the other hand, is exclusively a Medicaid and Children’s Health Insurance Program carrier that operates in about half the country. There are unlikely to be antitrust concerns.

END_OF_DOCUMENT_TOKEN_TO_BE_REPLACED

RELATED
Fine. Blame Ticketmaster for the Taylor Swift Fiasco, but Don’t Overlook the Fundamental Cause.
Can’t Get Taylor Swift Tickets? Blame Other Fans, Not Ticketmaster
There Are 8 Billion People. We Should Celebrate Superabundance, Not Lament ‘Overpopulation’
Why Do Progressives Support Democrats? Part One
Enjoyment of the Upcoming World Cup Will Come at a Price
Diabetic Complications and Economic Fundamentals
Where Is the Free Market Utopia?
On Gas Prices, Simple Economics Trumps Biden’s Partisan Agenda